The wonderful Canadian folk singer Anne Murray sang that song back in 1982. I remember it well. I was working at KZAN in Ogden, Utah at the time -- a country formatted station. I've always loved that song.  "...and someone stands there, with tears in their eyes. It's the same old scene, time after time, that's the trouble with all mankind.  Someone's always sayin' goodbye."   The person with tears in their eyes was me today, as I said goodbye to a dear friend of mine who is off to start a new life with a new partner in a new city.

I met Quincy Tyson about 12 years ago. He'd just moved to Seattle, and we started chatting online and I offered to take him for a motorcycle ride, and he accepted. Since then he's been one of my dearest friends in Washington, and we've seen each other through ups and downs, illnesses and scares,  jobs and boyfriends and broken down vehicles, and dog sat each others dogs, and worked on political campaigns together. But most of all he's been a great motorcycle riding buddy.

About 5 years ago he was working as a private limo driver and he happened to get a fare from the then owner of Downtown Harley-Davidson, one Terry Stallcop. Terry and I had become friends, he read my columns, I bought my bikes from his dealership. This chance encounter lead to Quincy being able to charm his way into a riding class and to learn to ride. And I would let him practice on my little bike Bandit. 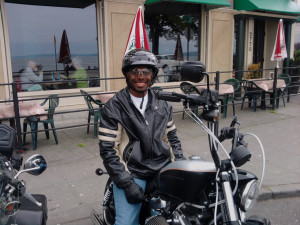 One day we went for a nice evening scoot, taking the ferry across the water to Port Orchard and riding down to Bellfair and a biker bar. On the menu at that bar is the BABB -- "Big Ass Biker Burger".  Quincy, who is so skinny that if he turned sideways would fall through a crack in the floor, decided he wanted it.  The burger came -- it was as big as he was, but with his hummingbird metabolism, he was able to eat it. 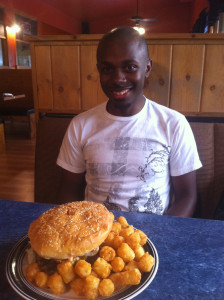 So as we were leaving the tavern, Quincy is eying Angus, and so I said, "you wanna try a bigger bike?" and somewhat hesitantly at first, he rode Angus back to the house.  By the time we got to my place he said he wasn't giving him back. He'd fallen in love with it.  So much so that a few weeks later he somehow again charmed Downtown Harley into selling him the exact same bike, only a newer model and with a slightly bigger engine than mine -- something he never let me forget. He named her "Edna".  That's right Edna. Now what biker in his right mind names his bike Edna? Quincy did.  And despite that name, we still rode many miles together. Because he lived in an apartment with no parking I let him keep Edna in my big garage/shop, and he'd come over and get her whenever he wanted to ride. 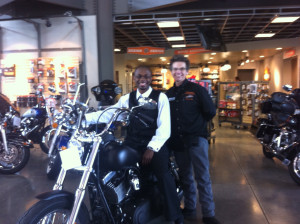 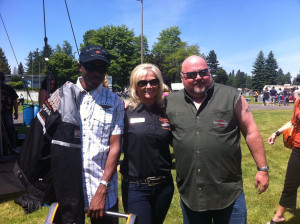 We even had a chance to be in a Harley fashion show for Downtown Harley Davidson one summer.  We'd ride often as we could, schedules permitting -- particularly in the summer when we'd head out to Cumberland in East King County and the City Hall Saloon for the infamous biker Taco Thursdays. It's a big thing every week, several hundred bikers converge on this bar far out in the country for $1 tacos and live music.  Quincy would usually scarf down an even dozen. A DOZEN. And yet he stays so skinny! 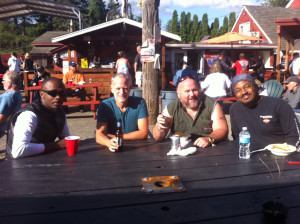 We'd get a group of rider friends together -- usually Quincy and Me and sometimes Crazy Tim, Peter, Garland, and when he could, Vince Edd. We'd hit Taco Thursday every few weeks or so all summer, especially if Quincy, who was now a tour bus driver, wasn't off on a wine tour in Eastern Washington, where he'd drive the tour and bring back more wine than he knew what to do with. Well he knew what to do with it, drink it of course, and he became quite the wine aficionado.  Moving to Memphis he's going to miss his Washington wines for sure.

Two years ago Garland had to unfortunately give up riding, and then Vince decided to say goodbye and move to the San Francisco Bay area last year, and our little biker gang shrank, but I got more room in my garage as both Vince and Garland kept their bikes at my place. Quincy and I were there to say goodbye to Vince as he left. Yet another one who said goodbye... Somone's always saying goodbye. 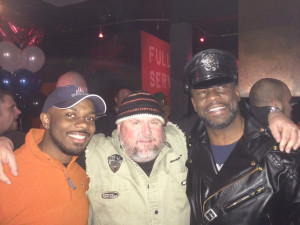 And now with Quincy leaving, there's just me and Peter in our little gang. He and I were co-miserating about that at Quincy's goodbye dinner on Friday -- but we'll still head out to Cumberland, the two of us, and drink a toast to the friends who have left us, and we'll miss them.

A year or so ago Quincy met a wonderful guy named Michael, and they are very happy.  Michael's job transferred him to Memphis and the newly graduated with a Master's degree from the University of Cincinnati, Quincy, decided to head there with him. Michael is learning to ride too, so Quincy and Edna will have someone to explore the roads of Tennessee. A dozen or so of Quincy's friends held a farewell dinner on Friday night and we all laughed and drank the evening away remembering the good times, and taking the obligatory selfies. 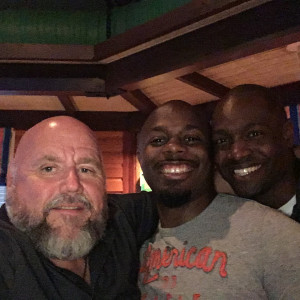 On Sunday Quincy and Michael came by to pick up Edna in a trailer as they head down the road to Memphis. This wasn't easy as Quincy had forgotten the keys and the forks were locked in a left-turn position. It took four of us to pretty much carry an immobile bike up into a trailer, but we did.

As he strapped Edna to the trailer, in my head I'm hearing Anne Murray once again. Someone's leavin' and someone's left behind. Well I don't know how things got that way. But every place you look these days, somebody's always sayin' goodbye. I've had a lot of goodbyes this past year it seems. Friends, relationships, locations -- they died, they moved on, I moved on, but someone, something, some place is left behind. And these days it seems like everyone's always saying goodbye. I swore I wouldn't tear up but I did as I hugged them both. Then I waved as they drove out of my driveway and turned up hill and off towards Memphis and a new life in a new city. 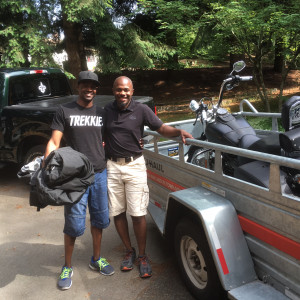 Turning back into my garage there sat Bandit, all by himself. Edna was gone for good, and Angus is still yet to be delivered after being shipped back from Palm Springs. I threw a leg over and fired him up for the first time in five months.  After a few sputters he started to purr and, like I always do when I'm sad, I strapped on my helmet and headed off down towards the ocean.  This time, once again, there was no light from a following biker in my rear view mirror. I've lost another riding buddy. But the road down towards  Alki Beach was clear and as always, the open road calls me on, and the wind dries the tears, and the highway heals the heart.