Everyone needs that special friend. The one who listens to all your crap, lets you cry on their shoulder, and gives great non judgemental advice. One that is always there for you no matter what, through thick and thin, good and bad. Someone who's been through similar trials and tribulations and that you can learn from them. Someone who's friendship is so special, so strong, that it creates a bond that is often stronger than a marriage or even a blood relative. Such friendships are rare and special and wonderful.  I've been fortunate to have several of those in my 54 years on this earth.

The first one is my late friend Mike Bryant, who I wrote about several months ago.  http://grgardner.livejournal.com/96186.html You should go read that post before going much further here.  It's quite relevant to what I'm going to say. Go ahead, I'll wait.

In my 20s and 30s Mike was my closest friend and confidant. We liked a lot of the same things, we worked together, we traveled and explored together, and we were always there for each other -- when our relationships broke up, turned to each other.  When we had money problems, we helped each other out. We loved to go out to eat - at our regular haunts and at new places.When one of us was sick, the other one was there. He was like the older brother I never had. I loved him dearly.

Mike passed away in 1996. I've never really had a friend in the intervening 20 years like him until recently. Enter one Louis Furdge. Mike always joked that he would come back after he died as a Las Vegas Showgirl in the 1950s, however apparently he may have come back as a 38 year old black casino dealer from Mississippi who lives in Solveng, California.

I've known Louis for about five years now, we met on line and chatted a lot, and one time on a trip to Palm Springs we met up as he was living here at the time.  We didn't hit it off right away, more so on my side, and I didn't talk much after that, and I regret it very much. We reconnected when I got to the Desert in 2013 upon my "retirement" and if it hadn't been for Louis this past winter here in Palm Springs would have been almost more than I could bear. Louis has helped me in more ways than I can count, just being there to listen to me vent and cry and scream. He connected me with a great therapist here that has worked with me (and one Louis has seen as well), and together they helped me survive this year and grow and move on down the road stronger than I was before.

We've taken a couple of trips together the past few years when he has time off and can get away from work obligations or spending time with his boyfriend Jim, who thankfully understands our friendship and who somewhat grudgingly gives up some of his time with Louis so the two of us can have fun. We enjoy just palling around and seeing things, driving up the coast highway and eating way too much good food. For Jim to give him up like that I'm very grateful.

Strangely enough Louis has a great affinity for my Mom, and she for him. Mom had invited Louis to visit her and Ron so we took a quick trip up to Salt Lake City a few weeks ago. Mom cooked "Mormon food" for Louis, and Louis cooked "Southern" for my Mom and the two of them spent hours chatting. Never was there a more odd couple -- a 38 year old black gay man from Mississippi palling around with an 80 year old Mormon white lady from Idaho. The two of them met at one of my gallery shows here in Palm Springs a year or so ago and hit it off. They talk often on the phone, sometimes more than I talk to Mom -- to which Louis will remind me "your Mom hasn't heard from you in a while..." And when he and I talk he always asks "Hows my girl?" meaning my Mom who he calls the "Idaho Princess". 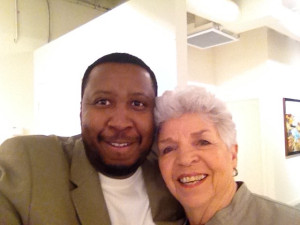 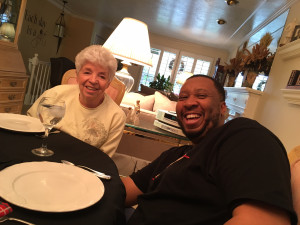 It was on that trip to Salt Lake City that I realized something, although it wasn't really clear right away. I've missed my friend Mike over the years, and longed for the kind of relationship he and I had. I realized that I had it once again in Salt Lake with Louis. And at a particularly appropriate place.

Mike and I loved an old fashioned hamburger joint in Sugar House called Millie's.  I took Louis there on our trip. I had told him about Mike when we were talking about friends and my early years in Salt Lake, and sent him the link posted above.  In doing that I re-read it myself and sitting at Millie's having a shake and eating french fries, I realized that Louis in many ways has become what Mike was 20 years later, right down to pigging out at Millie's -- twice on this trip alone!.  When this conclusion dawned on me I had to recreate a memory from 25 or more years ago. 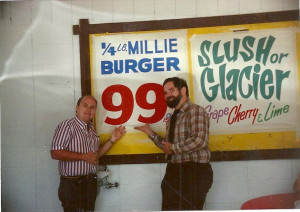 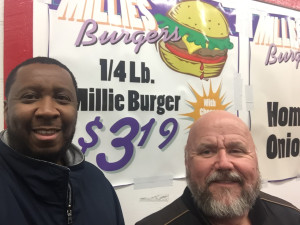 A lot has changed over time -- Millie Burgers are now $3.19 not .99 cents. In this picture Mike would have been about the same age as Louis, perhaps a little older, while I've gotten older, more wrinkled, gray. Louis affectionately calls me a "Codger" sometimes, especially when I start worrying about money. But he and Mike are so much alike it's scary. Both love to laugh, to eat, and both cherish their close friends. Both have a zest for living life that I wish I had. Both are emotionally strong and able to help their friends cope with problems. Both are non judgmental and free with an ear and with great advice. And both of them mean more to me than I can ever say.

And while Mike was about 40 in that picture, Louis is about to turn 39 in a couple of days. And unfortunately we won't be in the same vicinity on his birthday, I'll be toasting him and wishing him well, and thanking God for sending such a wonderful friend into my life.  Happy Birthday my friend -- and many more down the road.
Subscribe