Bikers are an interesting group. Whenever two riders get together and the conversation turns to bikes there is an instant bond that can either last for the length of the conversation, or develop into something more substantial, but it all starts with the bike and with riding.

So a couple of weeks ago I find myself sitting on the patio of one of the bars on Arenas Ave. in downtown Palm Springs sipping on a hard cider and I met up with a fella visiting from Tampa, FL named Wayne. Turns out Wayne is a rider, but doesn't get out all that often in Florida because of the traffic and drivers. But he and a friend were visiting Palm Springs for a week and the friend had to leave early so Wayne decided to rent a bike and go for a ride and asked if I wanted to go along. Silly question right?   And as it so happened, I had just published an article in the Southern California edition of Quick Throttle about riding in Palm Springs, so I gave him a copy and said "if you want we can do most of this ride".  He read it over and thought that was a grand idea so we arranged to meet up at the rental shop the next morning.

As it turns out, the next morning, due to some sort of strange weather phenomena unknown before in the desert, the weather meant normally for Seattle mysteriously appeared over the desert here in Palm Springs. It was cool and cloudy with light rain. How nice.  Not the usual winter sunshine, but hey we were riding so it didn't matter right?  As we say in Seattle, "Rain?  What rain?  Lets ride!"  We ride out and took off towards the North Shore of the Salton Sea -- me on Angus, and Wayne on a brand new rented Road King, with now standard ABS brakes. Wayne, not being used to them almost wiped out early in the ride, but soon enjoyed the power and grace of a big old Hog.

We headed out of the Coachella Valley on the freeway for bit before heading south on CA-111 which runs along the Eastern shore of the Sea.  I've written about this ride and this area before -- how it's very much a post apocalyptic land in many ways, surrounding a now dead lake and ghost town "resorts" from the 1950s that was initially formed by an environmental disaster of sorts at the turn of the last century, and killed off by another -- receding polluted water this century. Our first stop was the near ghost town of Bombay Beach, which I've photographed quite a bit in the past. Wayne was amazed at both the sea and the "town" and couldn't get over it.  I said I half expected Tina Turner and Mel Gibson to come riding up over the desert like in Mad Max. 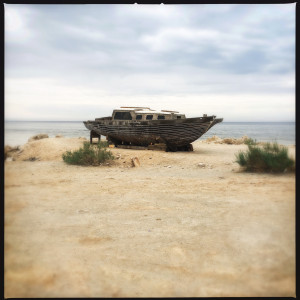 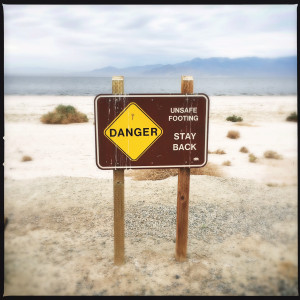 We left Bombay and headed further south, I wanted to take Wayne to Salvation Mountain and Slab City, just outside the town of Niland, CA. Slab City is so named because it was once a Marine base built during WWII and then abandoned -- after the buildings were torn down and hauled away the only thing left were the cement slabs they sat on. In the 1970s a small clan of hippies and off-griders took it over and it's now an epic squatters camp that bills itself as the "Last Free Place on Earth". The place is full of old hippies and free thinkers, artists, and other odds and ends who don't necessarily conform to what society thinks they should conform to all living "freely" off the land -- and I suspect a few welfare checks are thrown into the mix too. 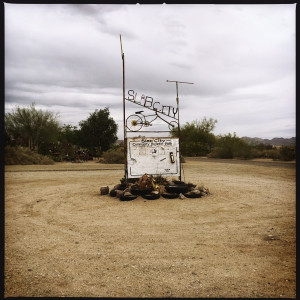 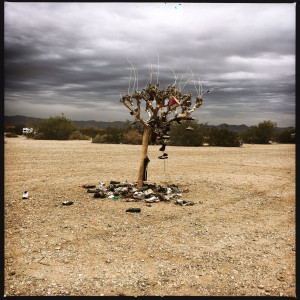 Just as one comes into Slab City however is the grandiose artistic statement known as "Salvation Mountain." This quirky weird statement was built and maintained by a guy named Leonard Knight who created it as a tribute to God and his gift to the world with the simple message "God is Love".  It's made of adobe and donated paint and over the years has evolved into a very large sculpture of sorts that people visit from all over the world. 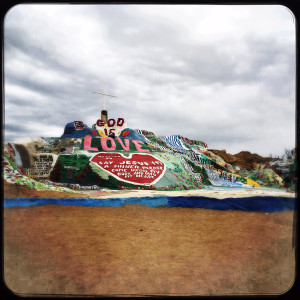 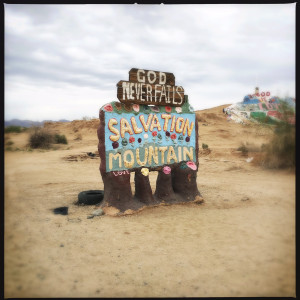 Leonard, who is 87 years old, continues to maintain and paint and add on to Salvation Mountain, living in the ancient Airstream trailer next to his "mountain."  It's almost like the residents of the abandoned Bombay Beach, after the apocalyptic event, roamed down South and set up an oddball community here. The nearest town is Niland, which aside from an old motel and gas station and a few farms isn't much.  But at one time maybe it was, given this spectacular concrete structure on Main Street. Someone back in the day invested in this building which now sits abandoned. 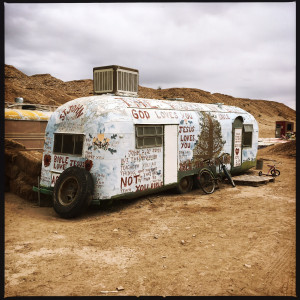 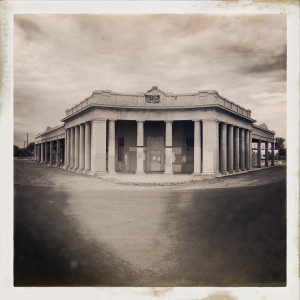 After wandering around a bit we headed West across the Southern end of the Salton Sea, through the small farming communities of the Imperial Valley before heading North on CA-86. We stopped for a drink and gas break in Westmoreland. I asked Wayne how he was holding up, given that he'd not been on a long ride in some years, and he said he was doing great.  I suggested we might head up to Julian for a late lunch but that it also looked like rain was likely up in the mountains. We scoped out the weather on the smart phones and decided to give it a shot.

Rolling out of Westmoreland on CA-86 up the West shore of the Sea, which sits below Sea Level, we turn due West on CA-78. The Salton sits below sea level -- at about 223 feet below. The old gold mining town of Julian sits in the mountains West of the Sea at about 4300 feet above sea level. We turn West and immediately start climbing up and after about 40 miles of a twisty curvy road with almost no traffic we topped out at Julian -- not before riding the last 10 miles or so in a light rain making the road wet and raining on us too. By the time we got to Julian we weren't drowned rats, but were more than a little damp too, not to mention starving.

I'd suggested eating at Carmen's Place, a great little Mexican and "other stuff" restaurant I'd eaten at before. Its located in an old miners home just off main street.  By the time we got there, about 245pm it was well past lunch and way before dinner, and we had the place to ourselves -- well us and Carmen. Had a great filling lunch and rested and chatted with her a bit. It rained some more while we were eating but it had stopped by the time we were done. I told Wayne -- well pretty much ordered him to save room for desert because we were stopping at the Julian Pie Company for a slice, no ifs ands or buts. Back on the bikes we rode down the mountain a bit, me chomping at the bit for some pie. 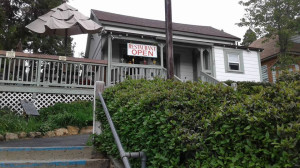 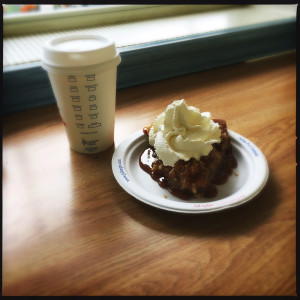 We roared into the quiet parking lot and went in and ordered a couple of slices and reflected on the ride thus far. But it was getting dark, we were chasing a storm and we needed to get back to the desert, which was still 70 plus miles away. The ride North out of Julian is along CA-79, and runs through the small towns of Warner Ranch and a few others along the high mountain valley, before climbing up to Anza and dropping back down into the Coachella Valley on a road carved into a mountain side that doesn't have a straight section -- or guard rails on it for 20 miles. At the bottom of the hill we parted ways with a wave and a fist bump at a stop light.  All in all it came in at a bit under 300 miles on my bike, but Harley's odometers are notoriously inaccurate -- Tony and I could ride next to each other and I'd go 100 miles and he'd go 91. I gues Wayne's did the same, as he came in at 453 and I came in at 297. 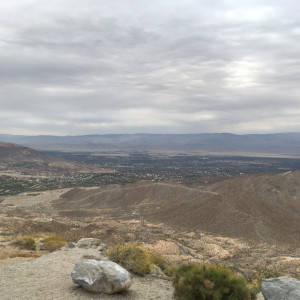 The next day Wayne posted pictures of the ride on his Facebook page and said this:  "Made a new bud yesterday. .a biker from Seattle that spends a 50% of his time in Palm Springs. .he writes articles for several biker rags on destination spots and experiences from his past or current rides..a damn good bud to have if your a biker..retired professional..not just a so called, "biker bum". So at first chance yesterday..I suggested a ride while in town, and he not only said yes, he took me on a ride to remember 297 miles (correction,just returned the bike 453 miles) of desert, mountains, and rock with 40 degree temp changes..one place was Salton Sea..it's like a scene from Mad Max..very post apocalyptic,and then up to a small town named Julian along the San Jacinto mountain range..where we had unCalifornia portions.. more like southern portions they were HUGE portions and some homemade apple pie. .@one of his favorite spots. It rained, it was cloudy it was hot then cold we went from 268ft below sea level to 6500ft above sea level. .it was one of the best damn rides ever. .thanks Gary." 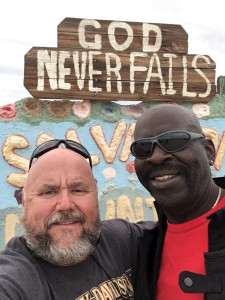 I'd have to concur in that statement. For some reason Wayne and I met and formed a friendship and had a ride for the ages. And I sure needed it -- both the friendship and the ride after having having been in a nasty car wreck the day before and enduring the emotional roller coaster that I've been on this winter. Maybe, as the sign at Salvation Mountain says; "God Never Fails" assuming there is one and he concocted this plan.  And it looks like next time I'm in Tampa visiting Tony I'll have someone to take me for a ride. I'm not sure if it can top this one, but I'll bet Wayne will try!
Subscribe