I know I've been quiet -- there's been a lot going on, internally and externally. Have not been in a "social" mood or even a writing one. But that's coming to a close.  In the mean time here's my March column for QuickThrottle. My publisher asked me to do a "trip" story this time rather than my usual opinion on whatever is on my mind...some regular readers may recognize this from the blog post here a few years ago on which it is based. 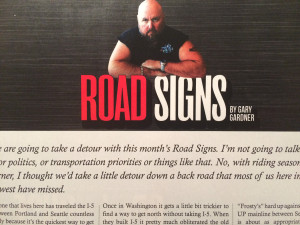 We are going to take a detour with this month’s Road Signs. I’m not going to talk about laws, or politics, or transportation priorities or things like that. No, with riding season just around the corner I thought we’d take a little detour down a back road that most of us here in the Pacific Northwest have missed.

Almost anyone that lives here has traveled the I-5 corridor between Portland and Seattle countless times. Mainly because it’s the quickest way to get between the two largest cities in the Northwest, it’s direct, and it generally takes about three hours. But you know you actually can travel between Portland and Seattle without once setting rubber down on I-5 if you want to. I know -- I did it last year.

Leaving NW Portland on Lombard Street – also known as Alt. US-30, you’ll wind through the charming St. Johns area neighborhood that make up this part of the Rose City, before turning South and crossing over the Willamette River on the spectacular St. Johns Bridge – a wonderful green painted suspension bridge built in 1931 when we still built grand beautiful projects like this. 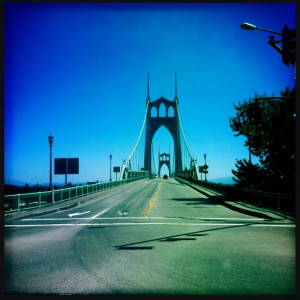 Across the river the highway merges with the main branch of US-30 and heads West along the south shore of the river until it meets the mighty Columbia which the road then follows all the way to it’s terminus at the mouth of the river in Astoria.

The old highway winds along the river, passing through the far West suburbs of Portland and the small river towns, turning North and then West with the river. Once out of Portland it’s a quiet road with little traffic and a joy to meander on. There are only two places one can cross the Columbia this far down stream – Astoria at the mouth of the Columbia, and at Rainier, which is opposite the town of Longview, WA.
The bridge at Rainier is a huge high arched cantilever bridge that climbs up almost like a roller coaster in order to gain clearance for large ocean going ships. It can feel like flying a small plane one is so high above the river at the apex of this bridge, looking down at the river traffic far below.

Once in Washington it gets a little bit trickier to find a way to get North without taking I-5.   When they built I-5 it pretty much obliterated the old road -- US-99.   One has to string together some county roads and a few state highways, but as long as you keep heading more or less aimed North you will get where you needed to be.  Each time I do this it’s a little different as there are a lot of local road options that will more or less keep you headed that way, winding through countless farms and towns on a series of two lanes, and doing about 50 mph.  The towns are all listed along I-5 as exits – but if you ever noticed at the exit no town exists as they are some miles West or East of the actual exit.   It's almost like riding through a land that time forgot, and such light traffic its always a joy to ride.

I’ve always loved roadside Kitsch -- those crazy things that people would build to attract tourists when Americans first started traveling the highways after WW II, and when the US Highway system was in its infancy. There's still a few around here and there, and they are great fun to find.   Winding through Lewis County if you end up in the town of Winlock and past -- according to the sign -- you’ll find the "World's Largest Egg". 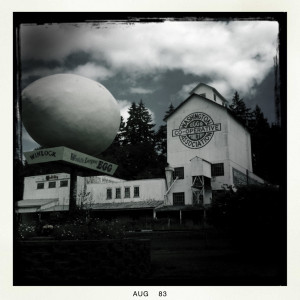 I guess we will have to take their word for it -- I have no way of verifying the claim.  It was obviously put there to celebrate the egg farming industry that is prevalent throughout this part of Washington.  Since Seattle is clearly the coffee capital of the world, all we need is a hog farm or two and Washington will be the center of the breakfast universe.  If it’s lunch time there’s usually a small café or two in all these towns. And it's always a good sign when there is a passel of motorcycles parked out front, and sure enough a few miles up the road in Napavine, WA was a 100 year old saloon named "Frosty's", hard up against the tracks of the BNSF/UP mainline between Seattle and Portland.   This is about as appropriate for me as you can get.   Bikes, Burgers, and Trains all in one place.  After Napavine it was only a short few miles to Centralia and then into Olympia.  I know these back roads pretty well since I'd explored many of them on my free time during the legislative session riding to blow off steam.  I eventually ended up heading up into very familiar territory -- WA-3 up the West side of Puget Sound and into Port Orchard, WA which is a short ferry ride across the water and home.  A ferry ride is a great way to finish off a trip.   Riding onto the boat and parking, and then going up to the deck and onto the front bow and watching the far shore get closer.  Seeing the familiar shoreline and neighborhood buildings approach, and feeling the ship start to slow down and then dock.  It signifies "Journey's End" like a period finishes off a sentence. It takes some work, but it is possible to get from Portland to Seattle without touching I-5 – assuming you want to spend 5-6 hours doing it too. And who doesn’t on a motorcycle. 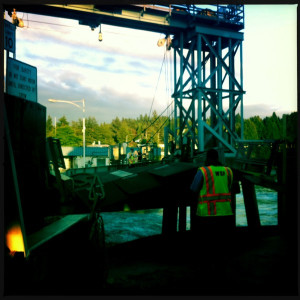 Spring is just around the corner – its time to think about riding. The politics and policy will still be there when we get back. If you aren’t under a time gun, I’ll see you on the back roads between Seattle and Portland.