So you'd think being the major columnist for a motorcycle magazine with around 100,000 readers a month I'd get a few emails in response to the things I write. You'd be wrong. I get very few. I get a lot of comments from people in person, saying they've read my stuff, they like my stuff, that it's good stuff etc...  I even had a guy come up to me on the ferry dock while waiting for a boat one day saying "you're that guy in QuickThrottle who's always in Palm Springs aren't you?"   But I rarely get good feedback via email, even though my email address is in each column. What I do get -- and not that often either -- are really pissed off emails from folks that read as if they were drunk when the sent them.

That being said, here's February's column -- on how the Utah law on cell phone use while driving is different than Washington's and how we can make Washington's better.  Following the column is a wonderful (insert eye-roll here) e-mail from a reader, that was just too good not to post here as well. 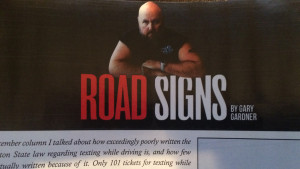 In my December column I talked about how exceedingly poorly written the Washington State law regarding texting while driving is, and how few tickets are actually written because of it. Only 101 tickets for texting while driving were issued last year – not even two a week. And it’s primarily because the law in Washington is so poorly written and out of date that it only applies if the person is driving and sending a text message at the same time. An actual text message only. All the other things that a driver can do like check Facebook or send email or look for a date on E-Harmony aren’t illegal.

Our legislature – which is in session right now – needs only to look a little to the southeast to see an example of how changing this law can and does work.  Back in 2014 the Utah state Legislature changed their law. I got to thinking about this while spending the holidays in my hometown of Salt Lake City. Aside from the digital signs on the freeway that read “Your Car Is Not A Phone Booth – Just Drive!” – one of the best such warnings I’ve seen – The Utah Highway Patrol announced that for the second year in a row the number of people stopped for texting or talking has significantly increased.

Troopers in the Beehive state pulled over 780 people in the six months between May and October 2015 for talking, texting, emailing, or checking Facebook or whatnot on their cellphones while behind the wheel on Utah highways.  The previous year, following the legislative tightening of the law, in that same period troopers pulled over 692 people, an increase of about 12 percent from that year to this. 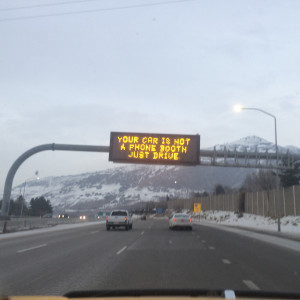 And if statistics are to be believed, that’s only a drop in the bucket of people who are texting or talking while driving. Some estimates I’ve seen say about 10 percent of drivers are talking or texting at any given time. Personal observation makes that seem even higher I think.  And if distracted driving is twice as risky as drunken driving, where is the “MADD” type organizations to rally the public and pressure lawmakers to make legal changes to address it? You remember how drunk driving laws were all tightened and strengthened in the 1980s. We need a similar push and an organization for distracted driving and cell phone driving laws. Where are our rider groups on pushing this? Hopefully not “distracted” by helmet laws. Here is a simple fix that can actually do a lot of good and save some lives.

Utah had pretty much the same problem as Washington in the way their law was written. Their old law said troopers could only pull someone over for using the “phone”, i.e. talking while driving not using a hands-free device. Troopers would pull someone over only to be stymied if the person was email or texting instead.  Washington’s law says they have to be “texting” or “holding the phone to their ear”.  Two loopholes big enough to drive the entire Cossacks drill team through, and the main reason no tickets are being written and the law pretty much goes unenforced here.

In 2014 the Legislature in Utah changed their cell phone driving law to prohibit any kind of phone manipulation behind the wheel except for talking using a hands-free device or getting directions (i.e. using the GPS function). I kind of think the GPS loophole is big too, but the results in the numbers of people pulled over and tickets issued speaks volumes to how the Utah law can be enforced better than the one in Washington. The fines in Utah range from $100 up to $1,000 if an accident is caused and someone is hurt.

What I’d like to see, and it will take some time for the statistics to be gathered and analyzed, is if there is a measurable decrease in accidents and deaths where the driver was using a phone. I’m going to bet that there is, and it would show that enforcement of a well-written law really works and drivers get the message that they shouldn’t be using their phone while driving for any reason.  Right now troopers in Utah say they aren’t targeting anyone who just “glances” at their phone occasionally.  They are targeting people that continually glance down and weave all over their lane.  Even with that they pulled over 780 people!

Washington’s law is as poorly written as Utah’s was. It shouldn’t take much effort to change it. Utah, who’s entire population wouldn’t match the population of the Puget Sound region, and who’s freeways have an 85mph speed limit, managed to pull over 780 people for cell phone use while driving. Washington – just a paltry 101.  Don’t tell me we can’t do better than that. The first step is fixing the law to mirror that of Utah’s.  I’m tired of glancing over while driving and seeing someone fixated on their phone, or avoiding them when they weave in and out of their lane.


Gary can be reached at roadsigns@comcast.net and you can read his blog at http://grgardner.livejournal.com or http://www.grgardner.com


And so in response to that column, I recieved the following e-mail from one of my readers -- verbatim and unedited, and too "good" not to share:

Hey gary if u like utah so much why dont u go there....and stay....forever! We dont need u in Washington, and sure ass hell dont need MORE LAWS!!! People like u are whats wrong with this cuntry. Yes, there r folks who suck at driving, for what ever reason, your not going to curb that with more, or more specific laws. U cant fix stupid. Also noticed you took a photo while u were driving down the hi way....guess they don't have a law against that in utah?
Your a whiner. Survival of the fittest. And incase you think I've never lost anyone because of a distracted driver your rite, i have not.  I did however lose my brother to a self inflicted shot to the head. I don't go around trying to outlaw guns. The world is a cruel place, but you cant change that with more man made laws and rules.
One of my favorite things about motorcycles is the feeling of freedom. Freedom has its down side but its a hell of a lot better than the flip side. Deal with it, or go live under gods thumb in utah.
Best wishes,
Andy B*******
Sent from my iPhone

And so I replied:

Thanks so much for reading. Obviously the wrong brother died, I guess Darwin's theory isn't always right.