The actor Robert Dinero said:  "The mind of a writer can be a truly terrifying thing:  isolated, neurotic, caffine-addled, crippled by procrastination and consumed by feelings of panic, self-loathing and soul-crushing inadequacy. And that's on a good day."  This is a very true statement, and I can relate entirely. I've struggled for a couple of days to write my column for January which is due this week. I've finally finished it and will send it to my publisher tomorrow after I let it "cure" overnight a bit. More often than not when I struggle with whatever I'm writing, I really don't like it in the end -- yet others seem to love my ones that I think are crap. The January one started out that way but after a couple of days it turned into something I really like. More often than not when I hate something my publisher thinks its one of my best, and when I like something he's nixed it. So who knows what he'll think of the one I'm sending in. And you'll have to wait a month to see it anyway...

But in the mean time, here is the final one for 2015 -- a look at texting and driving and what's wrong with our present law in Washington. By the way, the photo was taken of my friend Garland while the car was stopped (you can see the 0 mph on the digital speedometer) so there was no danger posed to compromise the ethics of the writer, although Mr. Jarmon does tend to engage in texting and driving despite my warnings and his being a rider as well so posing for this was not a stretch for him...

Think back eight years to 2007. A lot changes in eight years – it almost seems like another era. Back then the term “smart phone” didn’t really exist, and the most sophisticated phone was the Blackberry. Remember those?  Blackberries were revolutionary because they had an actual keyboard and you could write and respond to email and texts. On most phones text messages were difficult because typing process required you to use the numeric keys to tap out a message – two clicks of the 1 for a “B”, then three clicks of the 4 for “I” and two clicks of the 5 for “K” and two clicks of the 3 for “E” and you spelled “Bike” and it took about two minutes per word.

In those stone-age years of technology Washington State was the among the first states in the nation to pass a law prohibiting texting while driving, which really wasn’t that big of an issue back then. One of my lobbyist colleagues who was pretty much permanently attached to her Blackberry at the time used to hold the phone in her hands and put her arms through the steering wheel to steer so she could respond to messages while driving until one day she had a certain State Senator named Tracy Eide in her car while she did it.  The Senator was mortified and is thus I think she was directly responsible for the law prohibiting texting while driving.

That law was passed in 2007 after two years of trying, and even before the law was passed prohibiting talking on the phone while driving. The law is so weak that it isn’t even affect points on a driving record or is reported to insurance companies! However both laws were passed long before smart phones took over the world and pretty much became surgically implanted into virtually every human, and I hear most newborns will be coming pre-equipped with them in the near future.

So you would think that with Washington being such an early adopter of such a law that there would be a lot of tickets written on it now that texting has become the means of communication of choice even around the dinner table it seems. You would be wrong. According to the Seattle Times only 101 tickets for texting while driving were issued in Seattle last year.  That’s not even two a week!

Part of the problem of both the texting while driving and the talking on the phone while driving laws is that they were written in that pre-smart phone era when it was less of a problem than it is today. And because at the time the cell phone industry hadn’t quite wised up to the dangers of it, they fought those laws tooth and nail and the end result was these poorly written, hard to enforce, and technologically specific laws that don’t work today and that most people don’t pay any attention to. 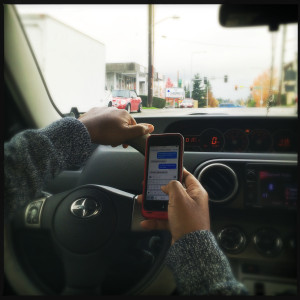 And now that the cellular phone companies aren’t opposing these laws, and are even advertising to people to STOP texting while driving, maybe it’s time to update these laws. We have a legislative session starting in January and it would be a great time for our motorcycle advocacy groups to band together with a coalition of insurance companies and safety advocates and revamp both the texting and talking laws.

What should they do?  Well the texting law specifically says that it is an infraction to: “send, read, or write a text message” on a wireless device. That means just that and only that – texting. If you are doing anything else on your smart phone – like sending an e-mail, or checking your stocks, or even arranging a date on E-Harmony then you can’t be cited. All of those things are as equally distracting as texting while driving and technically aren’t prohibited since the law says “send, read, or write a text message.”

Meanwhile the section of the statute that deals with talking while driving only prohibits “operating a motor vehicle while holding a wireless communications device to his or her ear.” In other words you can still hold the phone on speakerphone mode, holding it up on your shoulder and talk as long as you aren’t holding the phone to your ear.

How about if we combine the two into a new statute that simply says it is illegal to operate a motor vehicle while also operating a wireless communications device period? I’m sick and tired of being almost run off the road, in the bike or in the truck, with people using smart phones. And put some teeth into it too, making it an infraction that adds points to a driving record and is reported to an insurance company. If needed the law could make exemptions for two-way radios, GPS navigation and emergency situations and the like, and allow for using a phone in a hands-free situation.

And I’ll confess that I’m as guilty as the next person of talking, and on a few very rare occasions texting on my phone while driving. I also speed and bend a few other rules of the road. Tickets for those violations are definitely a deterrent for speeding, as is vigorous enforcement. Maybe a well-written and enforceable cell phone use law will have that same effect. I see at least a dozen violations a day driving just a few miles on errands, and I’m sure you do as well. The current law and the minuscule number of two tickets per week being written certainly shows there is room for improvement, and with that comes a deterrent effect, and then a reduction in accidents becomes inevitable. That would be a good thing.