Just finishing up my December column, which means that it's half-way through November and time to post the one from the current issue. My take on the safety of "cable barriers" along the highway...

Like most kids back in the 1970s, one of my first jobs was working at a hamburger joint. Flipping burgers, making fries, and prep work like slicing tomatoes. We had an industrial slicer that essentially took a whole tomato and made about 8 slices out of it at once – with horizontal razor-sharp blades spaced about an eighth of an inch apart. You set the tomato up against it and used a leaver to push the tomato through, and the whole tomato turned into 8 uniform slices. And sometimes the leaver would slip and I’d end up with a palm with eight uniform cuts across it, burning like the dickens.

And that’s the image I get whenever I’m riding along the highway and I come upon those sections of cable barriers in the median between the traffic lanes. In my head I see a rider crashing into them and coming out the other side like the sliced tomatoes did at my old hamburger joint. My mind tells me that these things can’t be good for us riders, and here is yet another example of the powers that be not giving a rats ass about the impact their decision has on motorcyclists.

All this was brought back when I was riding north on I-5 up into Skagit County earlier this summer and I came across a crew replacing and tightening up the cable barriers just outside of Mt. Vernon, WA. Earlier this year there was a terrible accident there when a Southbound loaded double dump truck crossed the median and went through the cable barrier and plowed into traffic on the Northbound side. The truck driver fell asleep and went through the cables like they were cooked spaghetti noodles. In this instance even the old Berlin Wall couldn’t have stopped this heavy speeding truck – but in this case the cable barrier actually did more harm than having nothing there.

As the truck plowed through, it pulled the cables that had been tensioned so taut that they snapped and whipped around like wild snakes and many of the injuries were caused by the flying cables acting like whips and slicing into the stopped traffic that wasn’t hit by the raging dump truck. One driver, as reported by the Seattle Times, said that they saw the cable flying towards their car and she and her passenger just put their heads between their knees as the cable sliced into their car, shattered the windows and hit the car multiple times before becoming tangled in the roof rack.

It’s an aspect of the cable barrier I never really thought of and it reinforced my fear of them. And in the wake of the crash, Washington DOT said they remained “confident our cable barriers are an effective way to keep highways safer.” And they clearly must still think that as they replaced this section with new cable barriers. But is that indeed the case?  I had my doubts, especially when a few years earlier WashDOT replaced the cable barriers that were in the median twenty miles South of Mt. Vernon down in Marysville with concrete jersey barriers when the cables failed to keep traffic from crossing the median. But WashDOT says cable barriers are actually safer than concrete because they are designed to slow down errant vehicles and absorb the force of the crash where concrete barriers don’t which causes more damage to a vehicle and more injuries to the passenger or driver. 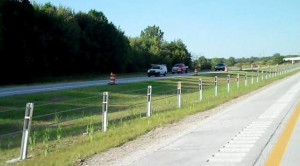 The Federal Highway Administration agrees, and even says on their web page: “Studies in Washington State and North Carolina have shown substantial reduction in fatal and injury crashes compared to other types of median barriers.” Contrast this to the thinking in Europe where many countries have banned them because they believe them to be especially hazardous for motorcyclists.

Cable barriers are certainly cheaper to build and install than a cement jersey barrier, and they go in quicker. But do they really stop traffic? The FHA and WashDOT both seem to think so, and the statistics and reports on their web pages bear it out. It’s true nothing could have stopped this speeding cement truck, not even a concrete jersey barrier, but instances like that are not as common as a car going across the median. Does the cable barrier “gently” stop the car unlike the cement wall, or does it allow the car to go through and then cause additional damage by flying cables? Is this the lesser of two evils?  Which is right? Maybe it’s situational – depending on the terrain and the traffic. I hope it’s not just because one is cheaper though. WashDOT has noted the concern of motorcyclists they say on their web page, but “concern about dismemberment resulting from motorcyclists collisions with cable barriers is not supported by data.” And after reading through several long boring studies on their web page I would have to agree that the evidence doesn’t support it. But they still give me the chills.

I don’t know the answer to any of those questions I just asked. But we as riders don’t have much of a choice either way. Get splattered like a bug hitting a cement jersey barrier or sliced like a tomato going through a cable barrier, or cut in half when a car hits it and the tension on the cable snaps it like a whip. I suppose it’s one of the reasons why when I do have to ride the Interstate I tend to stay out of the far left lane, especially if it’s hard up against the barrier. There’s no place to go but into it!

The solution? Give me a quiet scenic two-lane road, and then I won’t have to worry about it. It might take me twice as long to get somewhere, but hey, I’m on the bike. That’s the point isn’t it?