Rollin' on The River

It was already rather warm when I left Walla Walla Saturday morning -- in the mid 70s at 9am -- bound for Portland, OR. This entire region of Washington -- between Yakima and Walla Walla -- has turned into one big winery it seems. I've never seen so many tasting rooms as there are in downtown Walla Walla, or as many small little wineries with their rows of grape vines, rustic barns and stacks of barrels and cute little tasting rooms with sandwich board signs out by the highway inviting folks traveling down US-12 in for a sip. Even early in the morning the Volvos, Subarus and Priuses were pulling in and yuppieish looking couples were getting out. Isn't it a little early in the morning to be out drinking? Now if they had been scotch distilleries... but this isn't the Whisky Trail, otherwise known as the A-9, running through the Speyside region of Scotland, it's US-12 headed West towards the Columbia River, then US-730 for a quick dip into Oregon along the South bank of the river before hopping over the river at Umatilla and running down WA-14 all the way to Vancouver and Portland. 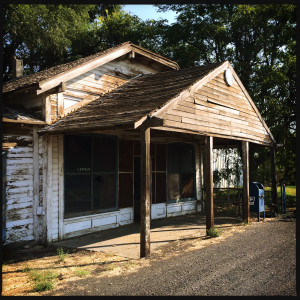 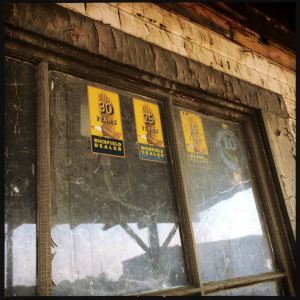 Shortly after leaving Walla Walla I came across this wonderful old abandoned garage in the crossroads "town" of Lowden. At one time it was a filling station and garage, but it's been baking in the sun so long that the paint is peeling off in potato chip sized flakes. But at one time it was a busy place along a major highway. I'm not sure if the mailbox is still used, although it sits there ready to accept letters -- for those who still write them. But there is no indication of the pickup time or even days. After shooting a few pictures I climbed back on Angus and headed West down US-12 to where it turned North to head to Pasco along the South bank of the Columbia, and where at the junction of US-730 which headed Southeast into Oregon along the river I turned South. About the only thing that would have made this a perfect day would for my i-Pod to suddenly pull up Tina Turner singing "Proud Mary" as I rolled along the river, so I made due singing it to myself. 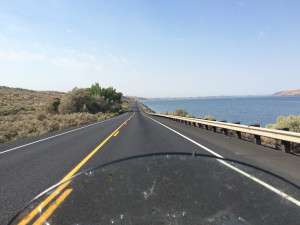 I needed some gas and to get off and stretch a bit, so in Umatilla, OR I stopped to fill up and have a bottle of water. It was really warming up again and there wasn't a cloud in the sky, so I sprayed on some sun screen while I was at it. I had to hop onto the I-82 bridge to get back into Washington where I picked up WA-14 for the ride down the North side of the river. In all my travels I've never ridden the bike down this highway, and it's been years since I've driven it. Its a quiet road compared to I-84 on the Oregon side which gets all the traffic. It runs along the river, sometimes climbing high on the bluffs above the water, and other times running right along side it. There's a few small towns on the river, and lots more wineries and vineyards. There's a major rail line on both shores -- the Union Pacific on the Oregon side, the BNSF on the Washington side, but there wasn't a lot of train traffic on Saturday. At the same time there are always river barges going up and down the Columbia -- hauling the recently harvested grain to massive elevators along the river that feed big ocean going ships. I love watching them both -- the barges and the trains, as well as the empty highway spooling out in front of me. There's not a lot to write about, but its a great way to clear the head. 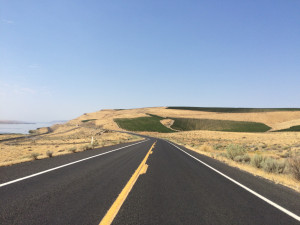 The further West one goes along the Columbia and the closer to the coast one gets, the greener it gets too, and after the big bend in the river at The Dalles the highway enters the Columbia River Gorge Scenic Area. The population increases quite a bit here the closer one gets to the Portland and Vancouver metro areas, so there's more people and more traffic, with lots of folks enjoying the scenery out for a drive on what may very well be the last gorgeous Saturday of the summer. 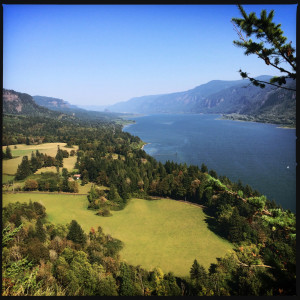 Eventually the river and the road enter the Portland metro area -- on the Washington side of the river, Highway 14 becomes a freeway into Vancouver, WA, and ends at I-5 where I pop over the Interstate bridge back into Oregon and check into my hotel on Hayden Island in the Columbia river, about 10 miles North of Downtown Portland. I came to Portland on this trip to stop by the Brian Marki gallery http://www.brianmarki.com, the fine art gallery that sells my photography in both Palm Springs and Portland. It was their 21st anniversary party on Satuday. I quickly showered off 200 miles of road grime and sun screen and bugs, put on some clean clothes and rode over to the gallery in the Sullivans Gulch neighborhood of Portland. Brian is one of the biggest promoters of my work, and he makes it a point to note that I shoot my images as I find them out riding on Angus, so when I pulled up in front and parked Angus across the street Brian heard me and came out and waved. 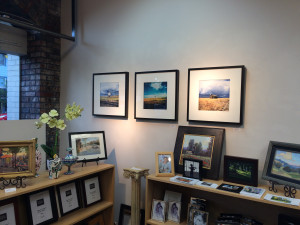 My work looks fantastic in his gallery and I'm very honored that he includes me in his stable of artists. I enjoyed the company of the crowd looking over all the works from various artists and sipping wind and nibbling on snacks. Truth be told I sometimes feel a bit out of place in gatherings like this -- never quite feeling like my work is good enough. But Brian has often commented that the best part of my work is the stories that go along with the photos, and he, and the patrons seem to love listening to the story around a particular image and I put on my old lobbyist/radio personality hat and just start talking, and more often than not it helps with a sale. 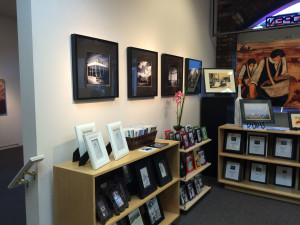 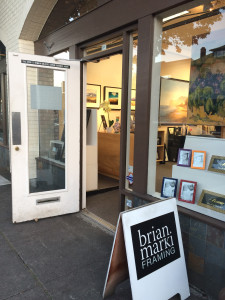 Sunday morning it was a bit cloudy and there was a storm headed in that called for rain late Sunday in Seattle, so I loaded up Angus and headed out -- oddly enough going South towards downtown Portland on I-5. It was just a few miles, but I wanted to head out of town on the old US-30 route that heads towards the coast along the South side of the Columbia after it winds through the Northwest neighborhoods of Portland and crosses over the Willamette River on a wonderful old suspension bridge.

US-30 was once a main transcontinental highway, and it's still a great ride out of Portland rather than taking I-5. It follows the river North and then West again where the river makes its final big bend to the West and heads to the Pacific. There is another large bridge crossing the Columbia here -- the last one before the four mile long bridge that crosses the river at the mouth at Astoria. This bridge drops you back into Washington in the town of Longview, where I pick up WA-411 for a windy drive up through Cowlitz and Lewis Counties, past the town of Winlock and it's giant egg -- now painted in Seattle Seahawks colors. 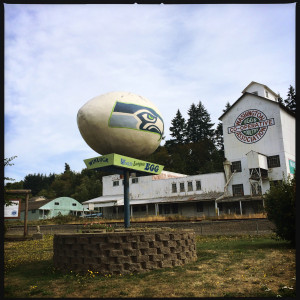 That reminded me that the Hawks were playing their first regular season game today, so as it was getting past lunch time I pulled into a little tavern in Napavine up against the BNSF tracks and went in for a bowl of soup for lunch and to warm up a bit and watch the end of the game. The tavern was full of Hawks fans and when I sat down we were up by a field goal late in the 4th quarter. St Louis tied the game and it went into overtime where Seattle lost, much to the dismay of the crowd in this small town tavern. I'd finished my soup and headed out for the final few miles back home.

I wound around the back roads here avoiding I-5, working my way North and decided in Olympia to head up the West side of Puget Sound and stay off I-5 and the traffic through Pierce County and into Seattle. I always have liked the road up this side of the sound -- US-101 to Shelton and then WA-3 up to Port Orchard. I used to take this often when I was living and working in Olympia as a way home to de-stress. The best part of this route -- aside from the scenery along the Sound and the lack of traffic -- is the only way back over to the Seattle side is to take a ferry boat. 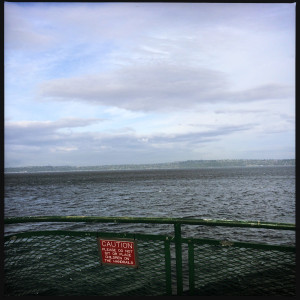 There is nothing better than a ferry ride across the Sound to end a 2000 mile adventure. It adds a finality to the trip like a period ends a sentence. Riding aboard a big ship, heading up from the open car deck to the passenger cabin, and watching the far shore get closer and closer as the boat glides over the water. The familiar views of the neighborhood and the Seattle skyline come into focus. The boat docks and you ride up the ramp and onto the dock and off into the familiar streets, and a mile or so later, pull into the driveway and shut of the bike. Journey's end. Home. For now.
Subscribe