I've been catching up on things since I got back on Friday -- a month's worth of mail, a yard that's a mess, and finishing up my August column.  That means it's time to post July's rant about disgustingly bad traffic in Seattle. Since I've been back I've only ventured out across town once and I'm still recovering from it...

Holy cow we have some traffic here in the Pacific Northwest. I guess I got spoiled spending the winter in Palm Springs. Not only is it sunny and warm, the major arterials are four to six lanes wide, the speed limit is 40-50mph! There’s rarely a traffic jam, even on I-10, and usually the only slow downs are caused by folks with Washington and Oregon plates driving under the speed limit and in the left-hand lane because, well because that’s what people from here do and they don’t seem to know how to handle a wide open roadway.

So I’ve been back about a month and it’s been rather difficult to get used to the way traffic moves (or doesn’t move) here versus how it moves in the desert. Thankfully I’ve yet to run over any slow drivers in my truck and I still (miracle of miracle) have not yet gotten a speeding ticket since I’ve been back. Mainly because the road is too crowded to even go the speed limit let alone speed. Plus I generally give myself two hours and pack a lunch to go the 100 blocks from my house to downtown Seattle.

And I know a lot of you are already saying to yourself, “here he goes again bitching about the roads and traffic, if it’s so great there why doesn’t he just go back!” But you miss the point. It’s not that it’s “better” there and “worse” here, is that it can be better here if we had the political guts to make it better. But alas we don’t, and so I don’t see any hope of it improving and our task will be to figure out how to adapt rather than fight it I guess. Adapting can take many forms – some we invent, and some we can institute with laws.

One thing we don’t want to do is what the poor unfortunate rider did in early June on Highway 16 in Kitsap County. Traffic at an onramp was stopped so he chose to go around on the shoulder – a big no no, At the same time a car driver decided to do a U-turn and head back down the shoulder – an even bigger no no. The resulting collision killed the rider. The driver was charged with vehicular manslaughter. What I fear out of all this increased traffic congestion here are more accidents like this. People lose patience with the snail’s pace of traffic and decide to do illegal things that endanger everyone.

The frustration level that causes stupid mistakes and abrupt maneuvers rises even more when seemingly dumb things are put in place that keep traffic from moving at a normal even pace. Things like long lights, speed bumps, and “traffic calming” devices such as curb bulbs and traffic circles. Our other friends on two-wheels, the pedal bike riders have figured out how to get around the stupid things and are now pushing their own version of how to keep traffic (for them) moving and provide some congestion relief. It’s called the “Idaho Stop”. 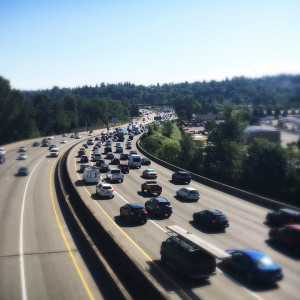 The “Idaho Stop” shouldn’t be confused with the “California Stop” which is that rolling tap the brake slow down that almost everyone does at stop signs, especially when there is no traffic. Or the “Utah Stop” which is when two Moms in minivans meet up in a suburban development and exchange Costco coupons and recipes while stopped at a stop sign.

No, the “Idaho Stop” is something that pedal bike riders were able to get in place in Idaho that deals with how bike riders treat lights and stop signs at intersections, and I actually think it would work really well for us motorcycle riders too. It goes like this:  In most cases when traffic is light treat a red light like a stop sign, and a stop sign like a yield sign.

In other words, if you ride up to a red light, and you can look both ways and see traffic is clear, you can slowly ride through it even though it hasn’t changed. If you ride up to a stop sign and can see there is no traffic coming, you can treat it as a yield, and proceed through the intersection at a reduced speed. In both cases if there is cross-traffic you must stop and wait for it to clear.

This keeps the bike traffic flowing and is said to be safer for bike riders. I suppose that can be argued, especially watching kamikaze bike riders in downtown Seattle completely flout the current law and even the “Idaho Stop” and ignore all traffic control signs, but that’s another story. One argument against the “Idaho Stop” is that it relies on the judgment of people, and some people aren’t smart enough to figure this out or have the wisdom to obey it. But then that can be argued about any law then can’t it?

Flowing traffic is happy traffic, and I’m all for anything that keeps traffic flowing, especially if the traffic is me. Roads are meant to move traffic not become parking lots. And if only our motorcycle advocacy groups had the power that the pedal bike rider groups have in this state, we’d be there. They get their own lanes and signals and are held in exceedingly high esteem by policy makers. If we throw our lot in with them we might actually get somewhere. Lord knows with the traffic around here we aren’t getting anywhere anytime soon.