The joy of an East facing motel room in the Pacific Northwest in late summer is that it's broad daylight in the room at 5am -- an hour before the free breakfast starts too. So I showered and packed up, then grabbed a bite and hit the road early. I don't think I've ever had a long motorcycle ride where the weather was absolutely perfect for the entire trip. And aside from a slight sprinkle in Utah that isn't even worth writing about, this trip has been perfect weather. Not too hot, not too cool. I was able to ride in a t-shirt the entire time. Friday morning in Pendleton was the same: t-shirt weather even at 730am. 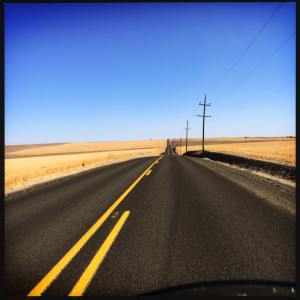 I headed North out of Pendleton on OR-37, a quiet two lane that runs through the farming country North of the town up to the Columbia River. This is wheat growing country, and you'd think you were in Kansas, not North Central Oregon from the look of it wouldn't you? I found this little road last year when coming back from Salt Lake, and enjoyed riding it again. They were harvesting the wheat, and I love watching the big combines run through the fields, their rotating blades keeping time with the music on my i-Pod. These are massive fields too, stretching for miles and miles, with occasional farm houses scattered here and there in clumps of green trees that contrast with the golden wheat. 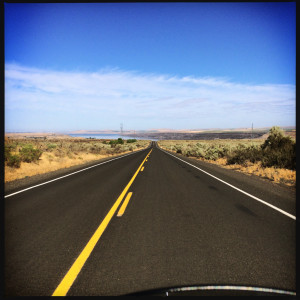 Fairly quickly though the wheat gave way to outcroppings of volcanic rock and sagebrush as the road dropped down from the prairie towards the Columbia River which marks the division between Oregon and Washington. I had to jump onto I-82 to get across the big river, but exited at the first exit and turned west on WA-14 and headed up and out of the Columbia River valley, past the grape fields of the big Columbia Crest winery, and then dropped down into the Yakima Valley. I've ridden this route so many times I don't need a map or a note telling me where to turn, and I tend to stick to the old highway that runs along the West side of the Yakima Valley rather than I-82. 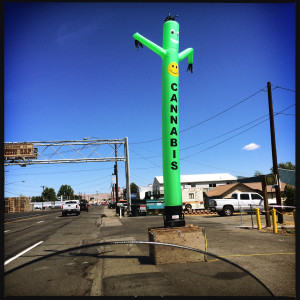 Approaching Yakima it became evident that I was indeed back in Washington, with the waving inflatable tube man advertising legal weed. Yep, back in the good old Pacific Northwest. I paused for gas and a quick snack outside Yakima before heading West on US-12 and WA-410 up and through Mt. Rainier National Park. The weather was so nice, and I'd ridden through Yakima Canyon last trip, which would have also required that I take I-90 through Snoqualmie Pass to get into Seattle. Seeing that I had managed to avoid the Interstate for virtually the entire trip up from Palm Springs, I thought I'd keep that streak going too.

It's a long climb up from the Yakima River valley to Chinook Pass on the flanks of Mt. Rainer, but it's one of the prettiest drives anywhere. The road climbs and climbs for almost 50 miles before it tops out at 5,430 feet at Chinook Pass and there on the other side, dominating everything around, is Mt. Rainier in all it's 14, 410 feet of massive glory. 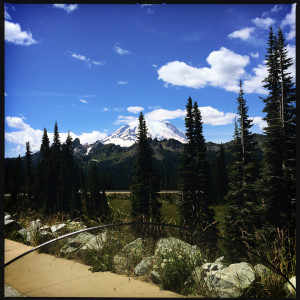 Highway 410 drops down the North East slope and brings me back to civilization in the form of the Puget Sound metro region and all it's incumbent traffic and population. It's an adjustment to the senses and quite a shock after riding for three days in sparsely populated regions of the West. It probably took longer to get through that traffic to the house than it took to get from Yakima and over the pass. But then I was pulling into the garage and shutting the bike off. The sudden quiet and lack of motion was a little welcome, but at the same time a bit sad that the ride was over.

The melancholy has returned as well. I'm home for a while now, returning to an empty house with no one coming home later to talk to, no dogs to play with, or relatives to catch up with. The previous six months have been full of that -- my friend Danny whom I lived with in Palm Springs, his dogs, and my family that I've spent the last week visiting with as I rode home. The house is empty and quiet and musty -- the spiders have built their webs around the doors and pathways again since no one walks up to the place. The leaves and weeds are growing in the cracks of the driveway. It appears that even my neighbors have gone on a trip as there is no sign of life at their place. 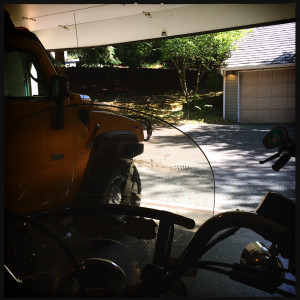 There's a mountain of mail to go through, laundry to do, bills to pay and chores waiting as well. And a lot of thinking. Do I sell the house and find something smaller and more practical -- maybe get enough for a small place here and in Palm Springs with no mortgage on either? How much work do I put in to get it ready to sell if I decide to? What needs to be done to the house and the yard even if I don't. Do I keep focusing on writing and selling photography and some voice-over work thrown in as well or do I find a job to help occupy my time and pay the bills. The savings are holding out, but they won't last forever. Guess I need to get busy.
Subscribe