There are days on the road where everything is aligned and the ride is epic. Today was one of those days. It's the route, it's the weather, it's the traffic, it's the tunes on the i-Pod, and the mood of the biker. And it's kinda funny coming off a day where I was rather melancholy. Thursday started off on a wonderful note. I had the chance to have breakfast before I left with my Mother's cousin Julia. In the definitions of genealogy I think this makes her my second cousin, but I'm not sure. In any case, she and her husband Peter met me at a little breakfast joint not far from my hotel. I try to see them whenever I pass through Boise and we always have a great time. We are very like minded -- ex Mormons, somewhat left of center, teetotalers, in a family full of active Mormons, who are somewhat right of center ,who won't drink anything stronger than KoolAide and think Pepsi is a sin. We get along wonderfully. 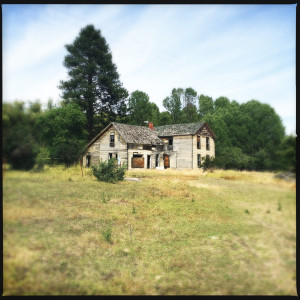 In fact it was alcohol that brought us together this trip. As I was riding up from Palm Springs I got an email from her asking if I could on my next trip through Utah and up to Idaho, pick up a special unique bottle of whiskey that is made in Utah (a whole 'nother story), and that they don't sell in Idaho and can't be shipped there. She didn't know when she asked that I was on my "next trip through" at that very moment so it worked out great. I purchased the bottle and brought it to them at breakfast. Had it not been 8am and in a restaurant and in Idaho and me on the bike we might have opened it up for a taste. But we didn't, and we caught up on family gossip and fun stories as we ate.

As we finished up my step-sister Tammy popped in -- she's Ron's youngest daughter and the one of his kids that I'm closest to. She and I always have a great time together, we share the same sense of humor and quirky outlook on life. I was sorry I didn't get a chance to see the rest of her family but she couldn't get them out of bed to make it, so it was just us two for another hour, catching up on more family gossip and goings on.

All too soon I had to head out on the road, but given that within a few miles I'd be heading back in time to the Pacific Time zone, I had some extra time to give so I wasn't running late. I hugged her and hopped on the bike and headed West on I-84 for a few miles before exiting off on US-26 into Oregon, past the onion fields which smell like onions, the wheat being harvested by combines, and rows of potatoes about to be dug up. The road crosses the Snake and I'm in Oregon, gassing up in the small town of Vale, the last gas top for 100 miles through empty Oregon ranching country. 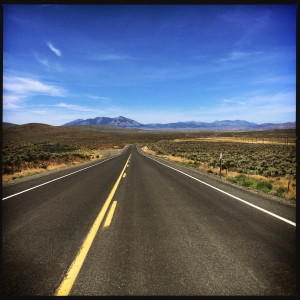 The temperature was in the mid 70s, not a cloud in the sky. Traffic in this part of Oregon is non existent -- I don't think I passed a dozen cars in 100 miles. In other words, it's almost perfect for a long solitary motorcycle ride. I driven this road many times before on the bike, it's one of the most scenic parts of Oregon and follows part of the original Oregon Trail taken by the early emigrants in the 1800s. There's very little population out here and it's as desolate as parts of the Intermountain West of Nevada, Utah and Wyoming, and it's just as pretty. It's tough country too, with the occasional abandoned ranch or homestead rotting in the sun.

I made great time, and stopped for a quick bite in John Day, Oregon before heading up US-395 following the John Day river North to the Columbia. John Day is a logging town that's down on its luck like most logging towns these days, and the abandoned drive-in theater hasn't seen a movie in some time -- at least as long as it took for these trees to grow up and block the screen. 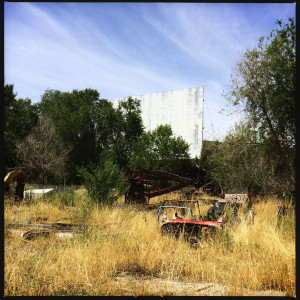 I had hoped to make it into Washington to either Richland or Pasco for the night, but when I stopped in Pilot Rock to stretch and gas up, and make a hotel reservation, I found that the Holiday Inn Express' in both cities were booked for the evening, and I had a choice of staying at one in Pendleton or going as far as Yakima, WA -- another 120 miles. It was 5pm already so I decided to stay in Pendleton for the night -- only another 20 miles up the road. I could have ridden another 50 miles or so past Pendleton, but 120 would have pushed it too much I think, and spoiled a wonderful day on the road. It's not often that you get such perfect days, enough to wipe away the melancholy and put a smile back on this grizzled biker's face. It's best not to push them too far. 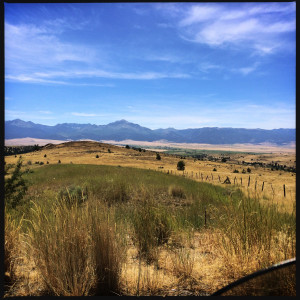