The main North-South highway in Utah is Interstate 15. It runs down the middle of the state -- almost exactly the middle -- and connects all of the major cities, and is the primary highway to get anywhere North or South in Utah. It replaced the old US-91 and much of US-89 many years ago. There is a parallel partial alternative to I-15 in what's left of US-89, which runs a number of miles East and over a mountain range from I-15, connecting a string of small early Mormon towns, before turning Southeast and heading into Arizona.

After spending the night in Cedar City along I-15, I wanted to get to Salt Lake without having to take the Interstate. I'd ridden and driven US-89 countless times and it was almost 50 miles East of me at that point anyway, so I mapped out a route that had me riding up the West side of the state almost all the way to Salt Lake on various state highways, and thus only had to take I-15 for a few miles on the final leg to Mom's house. It was cool -- in the mid 70s --  having rained overnight, as I pulled out about 930am and headed up North of Cedar City on Utah-130. This quiet two-lane headed Northwest out of Cedar City, along a lot of alfalfa fields and into the Great Basin, past small towns, which in Utah are often named for biblical characters or places, or characters from the other scriptures used by Mormons, The Book of Mormon. The first town along the road was Enoch. The early Saints were convinced they were building Zion and named their places accordingly. The early Saints were also busy colonizing the West, building towns about a day's  horse ride apart all up and down Utah and Idaho and into Arizona. It was said they were as busy as bees, and that's why the state seal has a beehive and why the state's road number signs have the number in a beehive. In Washington the road signs and numbers are in a silhouette of George Washington, and other states have a shape or an outline of the state like Idaho does. In Utah it's a beehive -- not because the state is a honey producer, but because it symbolizes the busy as bees early Mormon pioneers, who even named the state "Deseret" which is the word for honeybee in the Book of Mormon. 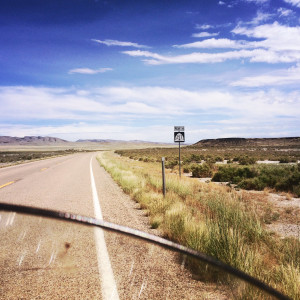 My first stop of the morning was in the small Central Utah town of Milford. Like a lot of small towns it has withered as people have moved to the cities, and it's once glorious past has faded. Most of Main street is vacant, with buildings dating from the turn of the century, including the surprisingly large and in its heyday no doubt the place for miles around, the Milford Hotel. There was so little traffic I was able to stand in the middle of Main Street for several minutes as I took pictures of this once grand edifice with nary a worry about being hit by a speeding car or even having to move out of the way. 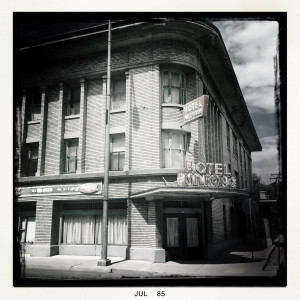 The only activity in Milford these days seems to be the crew changes on the Union Pacific's mainline between Salt Lake and Los Angeles, and a few folks shopping at the Family Dollar store on the outskirts of town. I watched a train come through and change crews and move on before hopping back on the bike and heading North towards Salt Lake.

The road continued up past more small farming towns, and off to the West towards the Great Basin and Nevada the thunderheads built as the day went on.  Days like this on the bike are wonderful -- perfect temperatures, wonderful grand vistas, and the road virtually to myself. All the traffic is on I-15 some 20 or so miles East, and really the only other vehicles on the road other than farm machinery were people traveling local, not long distance. This part of the West is vast and empty. 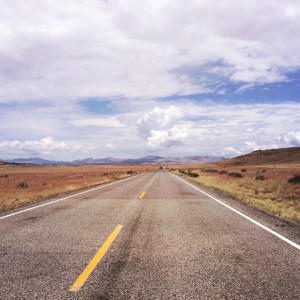 A hundred years ago it was the chance to strike it rich finding gold or silver in the hills that drew people to this part of the state. And they often found it too, Utah being rich with lots of minerals. Towards the North end of the Great Basin the hills rise up and were filled with mining claims and tailings and small ghost towns like Silver City and Mammoth. They are off on un-improved roads and so unreachable by Harley, as much as I'd like to back and explore like I did in High School. The largest town in this region was Eureka, who's main street once had a number of buildings, union halls, and stores selling things that miners wanted and needed like Levis. 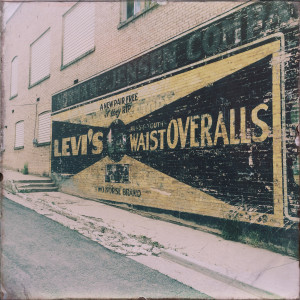 From Eureka the road drops down to the shores of Utah Lake, the large fresh-water lake that connects to the Great Salt Lake 50 miles north. Just like in the Holy Land, where the Red Sea (fresh water) is connected to the Dead Sea (salt water) by the River Jordan, the fresh water Utah Lake is connected to the Great Salt Lake by the Jordan River. Those early Saints were determined to build Zion in the West. The West side of Utah Lake is very sparsely populated compared to the East side against the Wasatch Mountains, where the string of cities all merge and connect with Salt Lake City now. The road was still quiet, and lightly traveled until I hit Lehi, where it all became a mass jumble and I jumped onto I-15 for the short drive up to Mom's place.

I pulled in a little after 4p, and Mom was outside. "We expected you here a couple of hours ago, its not that far" she said. "I wandered" I replied as I climbed off the bike. "What is there to wander to out there?" she asked. "Stuff" I said, "and besides, I'm in no rush, are we going to the theater or something tonite?" "Just glad you are here is all" she said. The thunderheads had followed me up and there was a storm building across the valley. "Did you get wet?" she asked. "Nope -- dry the whole way."  "Good." she said.  And in true Mom fashion dinner was almost ready, and she went in to finish it up as I unloaded the bike. It's almost as if John Denver penned it himself; "there's a storm across the valley, clouds are rolling in, the afternoon is heavy on your shoulders. There's a fire softly burning, and supper on the stove, and it's the light in your eyes that makes him warm. Hey it's good to be back home again..."
Subscribe