Although my friend Danny and I drove the Hummer back to Seattle over Memorial Day, I still had to get the motorcycle home from spending the winter in the desert. He and I planned to go to NYC for a short vacation on a "two-fer" ticket which means we had to travel together, so I would fly down back to the desert in late June so we could go to NYC and back, and then I would ride the bike back to Seattle via Salt Lake and Boise -- the reverse of driving down in December.

Its been hot, as it is this time of year in the desert, and since I'd be crossing a lot of desert Tuesday, I left very early while it was still cool. Fortunately it stayed below 100 degrees all day, so while it was hot it wasn't INSANELY HOT!!! The road up through Yucca Valley is very familiar, and on past Wonder Valley and over Sheep Pass then down into Amboy and one of my favorite road ghosts, Roy's Motel along old US-66. This is the secret back road that roadies take between Palm Springs and Las Vegas which is about 80 miles shorter than the roundabout freeway route. 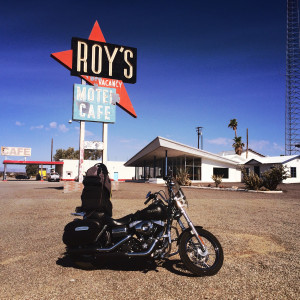 I had gassed up in Twenty-Nine Palms, which is the last place one can gas up before crossing the Mojave desert, and on the route I was taking the closest gas would be at Primm right on the California/Nevada line and about 30 miles from Las Vegas. Aside from the ghosts towns of Amboy, Kelso, and Cima, there is literally nothing between Twenty-Nine Palms and the the towns along the I-15. In a car with a large gas tank it's no problem -- on a Harley with a 4.3 gallon tank, it can be a nail biter of a 180 mile ride.

I managed to cross the vast empty Mojave, stopping only to re-soak my hydration vest in the restrooms at Roy's and in Kelso, and kept a wary eye on the gas guage, but made it to Primm with a little bit of gas in my tank to spare. I could have turned at Cima and hit the I-15 early and gotten gas, but it would have added 30 miles of freeway driving and I thought I'd chance it to avoid the freeway. When my folks drove down to Palm Springs in February I had them take this route and they complained that the road was very rough (which it was), but they have recently repaved it and its nice to drive -- except for the frequent low spots that were filled with sand which had washed in from recent rains. Its a very desolate road out here -- I passed maybe a dozen cars in almost 200 miles. 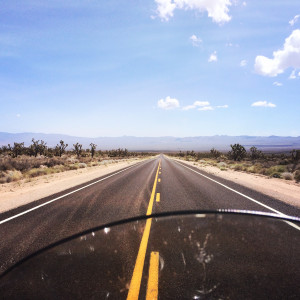 I'd had a cup of yogurt for breakfast and was getting hungry as I neared Las Vegas. All across the desert I got to thinking how nice a good In-N-Out burger would be, and I knew there was a large one in Las Vegas just off Tropicana Ave, and was counting the miles to lunch. The place was packed with Vegas tourists, but I managed to get a burger and sit outside where it was "only" 93 degrees. After lunch I had to brave the cacophony that is I-15 through Las Vegas. Between the traffic and the need for total concentration to get through town with all the visual distraction that is Las Vegas, it was a stressful 20 miles until the traffic cleared out as the freeway climbed up towards Apex. I was stuck in I-15 all the way through Nevada and into Arizona, as there is no other route heading the way I was. It was hot, noisy and rough going, and a long 75 miles.

Just after crossing into Arizona though I could exit off and take the old route -- the decomissioned US-91 which was the main road before I-15 was built -- up from the Virgin River valley and into St. George Utah.  The contrast of the old two-lane road with no traffic was amazing, and I was glad I took it. I found it hard to believe that the old road was once the main road before I-15, and that the section between St. George and Mesquite was the last section finished and one of the most expensive. Its an engineering marvel as it follows the Virgin River through a narrow gorge. Meanwhile the old original road takes a more northerly route around the mountains and the gorge, climbing up into the red earth country around St. George. I was hoping to find some old ghosts and remnants of the pre-Interstate but alas there were none. Because of some flooding in the Virgin River gorge this past year, the old road sprung to life again as a detour. I find it hard to believe that all of I-15's traffic could wind its way down this route, but I was glad to have the road to myself today.  It got cooler as the road climbed up out of the Mojave desert. And aside from my natural inclination to take any alternative to the Interstate, I had another reason for going this way. I wanted to see the site of the Mountain Meadows Massacre.
Back when I was in High School I read Juanita Brooks' book on the massacre, written in 1950 and considered the definitive treatise on the event. It's a shameful incident in the history of Utah and the early Mormon settlers, who for unknown reasons, killed 140 emigrants from Arkansas and Missouri who were headed to California. It is a dark chapter in history, and the true reasons behind the killings and who ordered it will never be known. The church tried its best over the years to whitewash the event and erase it from history, and Brooks was ostracized from the church for her highly acclaimed book. In ensuing years the church has taken a different stance and now maintains the site where the massacre happened.

Mountain Meadows is a lonely desolate and quite pretty site in the mountains Southwest of Cedar City, Utah. When I pulled up on the bike I was the only person in the parking lot at the memorial which is laid out across the meadow and feels similar to a civil war battle field. The wind was blowing softly from the West over the grassy meadow which I had entirely for myself for well over an hour as I wandered around reading the various plaques and descriptions. It was eriely quiet too, being well off SR-18 which is a lightly traveled road anyway 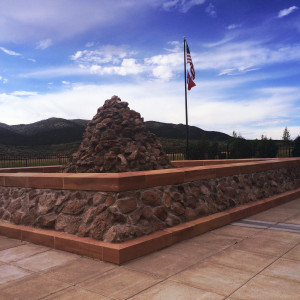 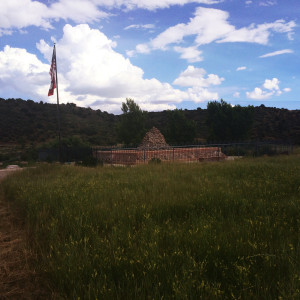 The main plaque reads:  "On September 11, 1857, a procession of Arkansas emigrants bound for California, marched northward up this valley, having been persuaded to leave their besieged camp by Mormon militiamen, bearing a white flag, who falsely promised them protection. As directed by the militia leaders, the women, children, and wounded left the camp first. The men and boys were the last to leave, each escorted by a militiaman. As the men neared this spot, a signal was given. The militiamen at their sides turned and fired upon the unarmed men and older boys. Within minutes all were dead, their bodies strewn near the road. Further up the road the women, children and wounded who were walking ahead were also murdered. Only 17 children ages six and under survived. Their lives were taken prematurely and wrongly by Mormon militiamen in one of the most tragic episodes in Western American history."

I walked around a bit more listening to the wind and wondering what drove the early Mormon settlers here to turn on this wagon train of people passing through. In Juanita Brooks' book she investigates the events thoroughly but found no evidence of direct involvement by Brigham Young, the leader of the church at the time. But she did charge him with obstructing the investigation and with provoking the attack through his incendiary rhetoric, calling him "an accessory after the fact." Mormon leader Young, she wrote, became so fearful of federal invasion of Utah that he created a hothouse atmosphere where the militia saw threats everywhere. And in addition, there were a large number of people from Missouri who were in the party, a state the Mormon's had been driven from years before. All this added up to a recipe for disaster.

The area was lonely then, and it's lonely now, and it was getting late, so I hopped on the bike and headed up towards Cedar City. Unfortunately my cheapie drug store reading glasses blew out of my pocket as I was riding, so I figured I'd look for a store in a town up ahead. The next town up Highway 18 was Enterprise, Utah, and like most if not all small towns these days there is a "Family Dollar" store on the edge of town. Enterprise is typical small Utah town -- with a mini-mart gas station, an auto parts store, and the aforementioned "Family Dollar" on the highway. The town has a single grain elevator and two Mormon Wards and a traditonal small town drive-in. I stopped at the "Family Dollar" first and found a cheap pair of reading glasses and asked the clerk as she was ringing up the sale how far up the junction was with the road into Cedar City.  "Oh its a ways up" she said, "but there is a short cut that will save you 10 miles or so." "Oh?" I asked, "whats it marked, is there a sign?" "Well if I were better at giving directions I could tell you, I'm really sorry, I suck at directions -- I think its called 'Bench Road' and its paved and everything." Pavement is always preferred on a motorcycle. "Its just past the curve up there."  I thanked her and asked if the drive-in was any good, and she said "its great", and on her recommendation I decided to have an early supper before heading to Cedar City.

Marv's Drive-In had an indoor dining room as well as the drive through and I opted to go in. It was a typical small town place, and the food was top-notch, the fries coming with a ubiquitous Utah staple -- Fry Sauce.  Fry Sauce is a concoction of catsup and mayo and a few other things. Many folks like it, I don't, but it's almost always served in non-chain drive-ins in Utah and parts of Idaho mostly, although I've run across it elsewhere in the West. 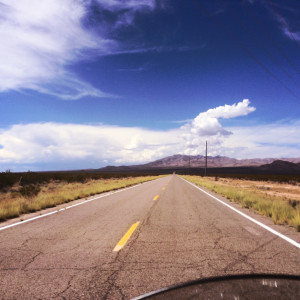 About then the sun started to dip behind the Western Mountains so I headed out, and even found the shortcut the clerk mentioned and it made for a nice ride into Cedar City about sunset, passing the site of an abandoned iron mine and a sign pointing to the "Ironton Ruins". Tempted as I was to go explore, that will have to wait for another trip. A little over 430 miles Tuesday, and only a few hours from Salt Lake City.  I texted Mom when I got to the hotel, and she said:  "Short ride home tomorrow, or are you taking the long way as usual."   I told her I was going to avoid I-15 at all costs and take back roads up the West side of Utah as far as I could. "That's how we figured you'd come" she texted back. "See you tomorrow." She knows me too well.
Subscribe