The Streets of Bakersfield

Louis and I drove US-101 back to Lompoc from Monterey on Saturday since it was raining in Monterey and it would save a lot of time over taking CA-1 along the coast which is the way we came up. We headed South through Salinas and the farm country, along what is signed "Historic El Camino Real" or "The Kings Highway", as this route was the main travel and trade route for the Spanish when they controlled Alta and Sur California at the same time the American Colonies were breaking away from England.  Once back in Lompoc, I picked up my bike at Louis' apartment and said goodbye to my friend as he had to go to work later in the day and I'd be leaving Sunday morning, and I headed to my hotel. But before I left he suggested a road I should take while I was in Lompoc. 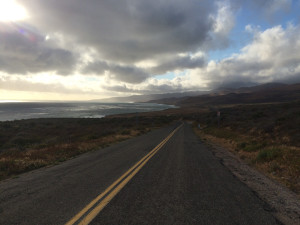 So I headed out as Louis suggested -- South on CA-1 to Jalama Beach Road, and turned West. Louis was right -- this was 14 miles of wonderful pretty road -- very scenic, winding up through the hills, along some ranches, and towards the ocean. Then all of a sudden the road rises up and makes a sharp North turn and voila! The view above. It was one of those "stop in the middle of the road and hope there is no traffic coming up behind you because this picture is too good to pass up" moments. At the foot of the hill along the beach is a California State Park, filled to the brim with a lot of old hippies in vans camping. Louis said the burger at the grill was quite good, so I had planned on eating there for dinner, but I arrived five minutes after closing unfortunately. Reluctantly I threw a leg over the bike and headed back towards Lompoc while contemplating dinner.

On the ride back from Jalama I decided that I'd ride over to Buellton and go to a place called "The Hitchin' Post", which is where a lot of the movie "Sideways" takes place and was filmed. Being a Saturday night it was packed to the rafters with snooty yuppie wine snobs trying to recreate the movie, so I squeezed into the bar and grabbed a stool and had dinner there. The food was good, but the pretentious crowd of folks up from LA all pretending they knew what they were talking about with wine was annoying.

By Sunday morning the clouds and wind had moved on and it was nice and sunny when I left Lompoc. It's only 150 miles to Bakersfield so I had time to wander a bit and headed out of town Northbound on CA-1 with Dwight Yoakam and Buck Owens singing "Streets of Bakersfield" on my I-pod. OK, I admit I set it to play that, it didn't just happen naturually, but it was appropriate. The road wound past Vandenburg AFB and miles of strawberry fields as it headed towards the coast. Most of it was a nice meandering two lane road through a few small towns before merging with US-101 in Pismo Beach. 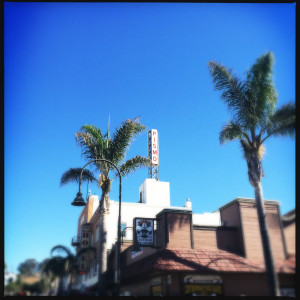 I don't know why but just saying "Pismo Beach" conjures up Bugs Bunny's voice in my head saying "PISMO BEACH?!?!?" with his scrunched up face. In reality its a cute charming little beach town with a lot of folks enjoying the sun today. At Pismo I hopped on US-101 for a few miles, headed South back towards Lompoc and exited off in Santa Maria where I picked up CA-166 for a run over the mountains and down into the Central Valley and Bakersfield. The sign at the exit warned no service for 65 miles, and for 65 miles I wound up a canyon towards the top of the coastal mountains. It was sparsely traveled, well maintained, with nice sweeping curves, and lots of sunshine -- what more could a wandering biker ask for on a quiet Sunday morning? 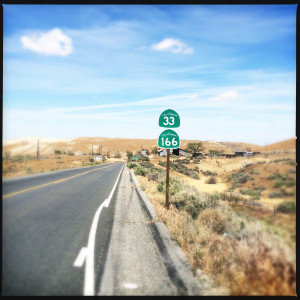 At the top of the grade is the small town of New Cuyama, with a single gas station, a small hardware store, a bar, and a post office. It baits the question, "what happened to or where is 'Old' Cuyama?" I pondered that over a great burger and fries for lunch at a little place called The Burger Barn. I drove right past it at first, and pondered it for a moment before turning around and heading back. It's really an old hole in the wall, but there were quite a few people at 1230pm on a Sunday. I opted to eat outside and enjoy the sunshine, even though it was only in the low 60s at this elevation. 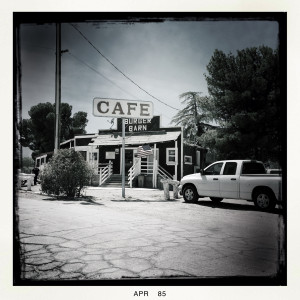 Topping off lunch with a peach shake, I started to get that post-lunch sleepy feeling, and decided to hightail it the remaining 60 miles to Bakersfield where I could check into my hotel for the night. The highway dropped quickly off the mountains and smack into the original oil fields that were discovered at the turn of the century in this area, and that are still pumping away with their bobbing grasshopper shaped oil pumps. Watching them is kinda like watching the wind turbines in the desert -- somewhat hypnotic and calming. Bakersfield sits at the Southern end of the great Central Valley of California -- where virtually everything you buy at the grocery store is grown. It's also the home the late country singer Buck Owens, who was also the former owner of KNIX-AM and FM where I spent 7 years working while living in Phoenix an eon ago. He was about the most famous guy to come out of Bakersfield and they have memorialized him by naming the street that runs past the nightclub he built as Buck Owens Drive. Indeed my hotel is right across the street from the Crystal Palace. I read Bucks biography earlier this year and so I wanted to spend some time here looking around. One of the things I admired about him -- in addition to his music, and the way he made his employees feel like family -- was his sense of history.

When the original Bakersfield arch -- the sign that was at one time across what was US-99, the main road back in the pre-interstate days -- that welcomed people to the town was in danger of falling down, he spent $200,000 himself to rescue, restore, and move the sign. Back in the late post-war 1940s when everyone was hitting the highway, virtually every town in the Central Valley had one of these arch signs -- and many towns across the West did. I still remember one in Ogden Utah from when I was a kid. Buck saw the value in preserving it, and it marks the entrance to the road leading to his Crystal Palace nightclub and the building that housed his office as well as the radio station his family still owns in Bakersfield. 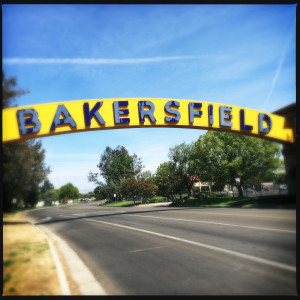 There is a part of me that thinks I should wander around and document these signs that still exist. I believe the one in Ogden is there, and I know there is one in Fresno, as well as one in Coos Bay, Oregon. It would be a great excuse for a "Then/Now" coffee table book. I'm not sure of the market for it -- but I know I'd buy one. It tugs at the heartstrings of a roadie and a wanderer like me, and makes me wish I had the ability to go back in time and see the country in the pre-interstate glory days of the highway.
I came here looking for something
I couldn't find anywhere else
Hey, I'm not trying to be nobody
I just want a chance to be myself
I've spent a thousand miles a-thumbin'
Yes, I've worn blisters on my heels
Trying to find me something better
Here on the streets of Bakersfield
Subscribe