I've been trying to pull together information for my accountant for my taxes and getting frustrated at it and the looming deadline of when they are due. Plus getting in touch with him during tax season to ask a question is nigh on impossible. So when Wednesday morning dawned a wonderful, clear, cloudless, warm day, I decided to take a "throttle therapy" day and go for a nice long ride. Outside of the trip to Phoenix and back and the riding I did while there, I haven't done much pleasure riding here in the desert this year, and I was overdue. 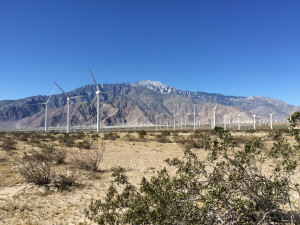 So I headed out West past the wind farms with Mt. San Jacinto looming over Palm Springs and the Coachella Valley. I had decided to head up to Idyllwild, a small town high on the on the backside of the mountain, (pretty much directly opposite this view) and make a loop along what is known as the Palms to Pines Scenic Byway -- a combination of CA-234 and CA-74.

But first I had to ride West along I-10, fighting the truckers and the potholes and the traffic at 75mph, in addition to the headwind that was blowing in and making all those wind turbines spin and generate electricity. Fifteen miles of that was more than enough I said to myself as I exited off in Banning and headed South and uphill on CA-234. This is a motorcycle road if there ever was one. The freeway sits at about 400 feet above sea-level. Idyllwild is at 6200 feet, and in between it's almost all a vertical climb of loops and twists and curves. Early in the climb one come across a sign that gladdens the heart of any motorcycle rider -- a twisty/turny sign with a sub-sign saying "next 22 miles". 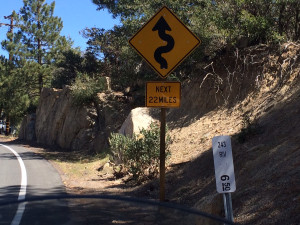 The road starts its climb up almost immediately, and swoops, and curves and twists its way up the North slope of Mt. San Jacinto, all the time overlooking Banning and I-10 at the West end of the San Gorgonio Pass far below. 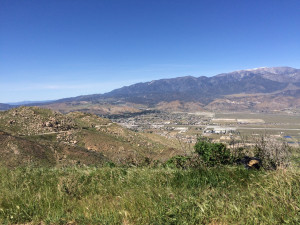 The road climbs and climbs and climbs -- with markers saying 1000 feet, 2000 feet, etc... all the way up to 6000 feet. That's a hell of a distance to climb in 20 miles. Fortunately being a midweek morning there was virtually no traffic, which is just what I needed. Just me, the bike, cool air, wonderful views, and nothing on the agenda but the ride. About 3/4 of the way up the mountain is a vista-point pull out called Indian Vista. I pulled off to stretch and take in the view and in doing so remembered back to being here some years before.

Back in 2006, my former husband Tony and I took a few days for our very first trip to Palm Springs to visit our friends and neighbors Madelon and Mildred, who wintered in the Desert. How I was able to escape in the middle of a long legislative session I don't remember. Neither of us had ever been to Palm Springs either, and we decided that we'd fly into Ontario, CA and rent motorcycles from the Riverside Harley dealer and ride into Palm Spring on the back roads. It was the first time we'd done a fly and ride trip too, and so this whole thing was new to us.

I'd mapped out a route using the then-new "Harley Ride Planner" on line, and it took us from Riverside to Hemet and then up and over Mt. San Jacinto via Idyllwild. What the map didn't show was the elevation change, and two newbies like Tony and me didn't have the sense to check it out and assumed we'd be riding in Southern California and Palm Springs warmth and sunshine.  This is why I still prefer old-fashioned paper maps and my well worn Harley Ride Atlas -- it shows forests and elevations. But I didn't have it back then. And we were riding in sunshine -- but as we climbed and climbed out of the valley, it got cooler and cooler and then we saw (gasp!!!) SNOW! And neither of us had any cold weather gear on and here we were riding motorcycles at a high elevation in March with SNOW on the side of the road on the bloody way to Palm Freaking Springs!!!! Snow was the last thing we expected and we sure weren't dressed for it and about froze.  But we toughed it out and had a great, albeit cold ride into Palm Springs that day for our very first visit to the desert. 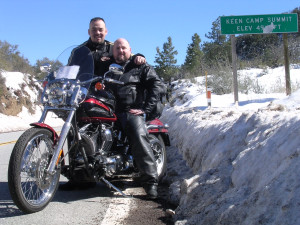 So as I sat there admiring the view from Indian Vista and remembering back to the last time I was there, I went scrolling through my phone and found a picture of Tony um...admiring the view at this very same spot. The date recorded by the phone was March 15, 2006 at 11:37am. And there I was sitting at the exact same rock on March 25, 2015 at 11:20am -- 9 years and 10 days later. I texted Tony the "then" picture on the left with the "now" picture on the right and noted that it was 9 years almost to the day that we had been there. And despite all my other trips to the desert and the two winters I've spent here now, this was the first time I'd been back to this spot since then. Hard to believe that nine years has gone by. 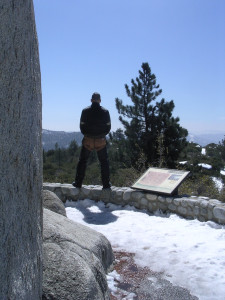 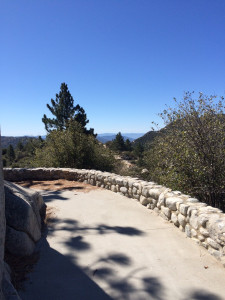 I threw my leg back over the bike and headed out on the road, enjoying the warmth and the sunshine and the views. Another 10 miles and I was pulling into the mountain village of Idyllwild. I putted around town and found a parking spot, and wandered about the shops and galleries and found a nice place called the Gastro Gnome for some lunch in the sunshine. The air was sweet with the smell of pine, and I lingered over a couple of iced-teas before heading down the road, looking West towards the town of Hemet and Diamond Lake in the distance, and the creeping haze from the LA basin on the horizon. 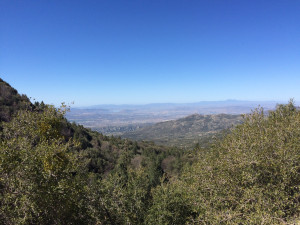 The Palms to Pines route continues after CA-234 ends at it's junction with CA-74, and I turned East on CA-74 and across the high valley near Anza and then started dropping down into the Coachella Valley --  on a road that is almost as twisty as the one going up. Alas CA-74 drops you smack dab in the middle of Palm Desert and the traffic of the Valley, and so I wended my way back to the house after about 150 miles of me and the bike and the sunshine and nothing else to do, backing into the garage just as the sun was going down over Mt. San Jacinto. A day of "throttle therapy" and remembering back nine years ago to the first time I was in Palm Springs. A lot has changed in those nine years. Tony and I divorced, Mildred has passed on, I've gone into "pretirment" leaving the political world behind to become an "artist" and a "writer, and worst of all, a "snowbird".  But the views on the road are the same, and the Mountain still looms over the valley, and it's still warm and nice. Something a day of throttle therapy will help remind you. 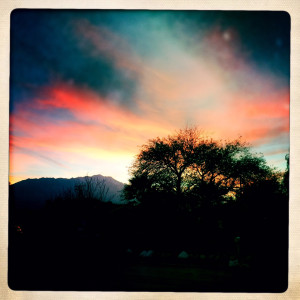