The Love of Neon

I've always loved neon signage. Those glowing tubes that spell out words or shapes and objects, advertising a business or location along the highway. The warm glow enticing people to enter an establishment or pull off the road. Neon is what lit the advertising world in the 1930s and onward, getting ever larger and more spectacular until you ended up with the neon orgasm that was Las Vegas in the 1960s and 1970s. That classic side of Las Vegas unfortunately is now relegated to a museum or two for the most part. At one time in college I had intended to write a coffee table book of photographs of classic neon signs at night from across the West. I traveled all over the West and attempting to take photos, but taking pictures of lighted neon I found is not an easy thing to do, even with the state of the state-of-the-art 35mm SLR camera I had back then. But I tried, and somewhere I have a few slide boxes with those pictures. In graduate school I even took a class in neon construction. Arizona State University had an actual neon shop in their art department and offered a class. It was great fun, although very difficult. I learned to heat and bend glass tubes and I created a piece that was part of an exhibition of student work that I was very proud of and had for some years until it broke and I had to toss it out. It reflected my love of the road and travel and classic neon. I wish I had a picture of it, and I expect that I do somewhere back in a box in Seattle, but I'll try to describe it:  Picture if you will the window shape of a 1960s bus -- that forward slanting parallelogram shape -- outlined in yellow neon, mounted to a fluted stainless steel sheet of metal like on a classic 1950s bus or railroad car. Underneath the window shape I painted a stripe to match the under-window stripe on a 1950s Greyhound bus. Inside the window frame made of yellow neon was an outline of the Monument Valley desert bluffs made of orange neon.  I titled the piece "East of Tuba City" for the town on the Navajo reservation near Monument Valley. The piece hung in my apartment in Tempe for a year or two after I made it, but it broke and as I said, I had to toss it out.

My original coffee table book idea is probably impossible now. The old wonderful cool old signs are all but gone these days. One can find remnants of them along the old highways, but for the most part they are either dark, or broken, if not gone completely. I find them as I ride along -- and some I even remember when they stood and were lit, but now lie gathering dust in a parking lot -- like this one from a small radio station in Price, Utah. Even the radio station is gone now -- along with the coal that was mined there and for which the station was named. 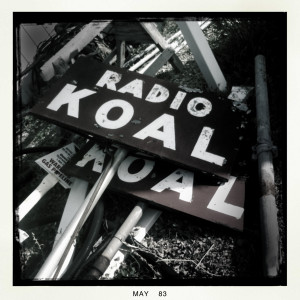 So maybe now I'll just have to settle for taking pictures of the ones that are left in the daylight. And while not as cool or as evocative or romantic as they were when they were lit and glowing at night, they still bring me back the glory days of neon and roadside advertisement -- of looking out the car window late at night in a small town, seeing the warm glow inviting the traveler to stop and rest, in an air-cooled cottage at the Kiva Lodge in Mesa, Arizona, or the El Rancho Verde in Blythe, California along the Colorado River. 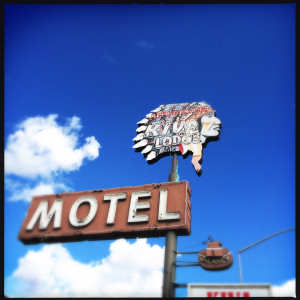 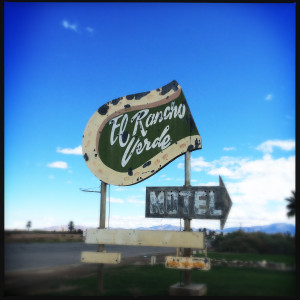 We will all just have to close our eyes and imagine in our heads how the Highlander Lodge's kilted Scotsman looked outlined in neon, glowing in the night desert sky here in Desert Hot Springs, California -- about as far from the cold and foggy moors of Scotland as one can get. Or how the giant "Roy's" motel sign in the map-dot of a town of Amboy, California deep in the middle of the Mojave Desert along old US-66, once glowed and beckoned to travelers who could see its lights 40 miles away as they glided down to the bottom of a long desert valley in their big old land yacht sedans. 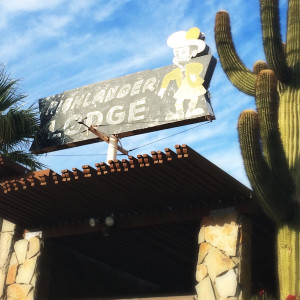 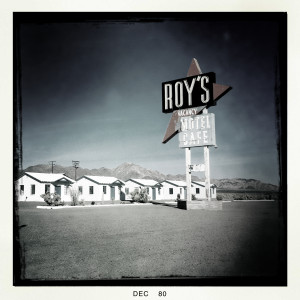 I still love these signs, even though they no longer glow. One can get a mental image of how they once looked when new and functioning as they were designed. Perhaps that is the coffee table book now -- assuming there is a market for such a thing beyond my own nostalgic artistic senses. 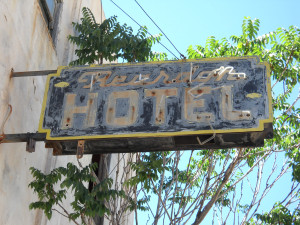 But every now and then one stumbles across something still glowing as it should -- like this little cafe in the small town of Snowville, Utah. The warm red glow of the sign cuts the chill off the air at a cafe that has been serving up pie and coffee and burgers to the ranchers and farmers who eek out a living in this forgotten corner of the Intermountain West for years -- the neon coming from Young Electric Sign in Salt Lake City, who's claim to fame is as builders of much of the original Las Vegas Neon. 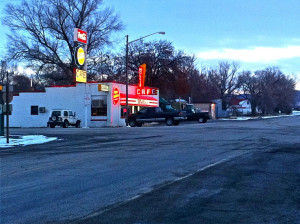 As sad as it is that classic neon has pretty much gone dark and bitten the dust as progress has marched on and newer methods of signage have been invented -- all of which lack that classic warm nighttime glow that neon provides -- here and there an effort has emerged to restore and re-light some wonderful examples of this art.

In Tucumcari, New Mexico - a town that embraces it Route-66 heritage, and which once boasted over 1000 motel rooms to cater to the weary traveler on the Mother Road, with billboards advertising "Tucumcari Tonite" for hundreds of miles in either direction -- the owners of the classic 1940s Blue Swallow motel court have fully restored it's colorful neon signage and outline of the building. I was lucky enough to stay here for a night on a Route 66 ride in 2010, giving me a chance to at least pretend I was back in the 1950s, traveling across a neon lit country. 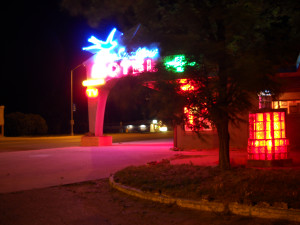 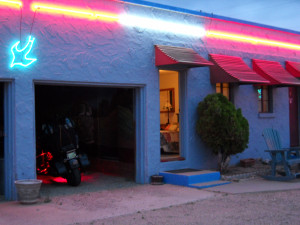 And bless the folks who own the Starlight Motel on the old stretch US-89 in Mesa Arizona, who spent probably a small fortune restoring this classic animated neon sign from the 1950s. In the day she isn't much, but at night our diving lady leaps off the tower and into the motel pool over and over and over and over all night long. May she dive and splash forever. 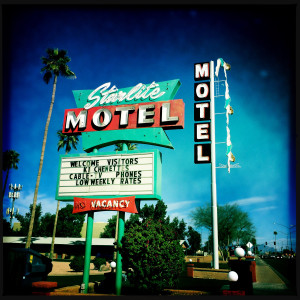