My goodness how time flies -- almost the middle of March already. So as I sit down to write my April column, it's time to post my column from March. I write about the practice of "Lane Splitting" by motorcycle riders -- and a bill in Washington that would legalize it. Here in California it's legal -- the only state it is. The bill in question has since I wrote this been heavily modified, and passed the Senate and is awaiting action in the House. I couldn't give you odds on the chance it will pass and be signed by the Governor. 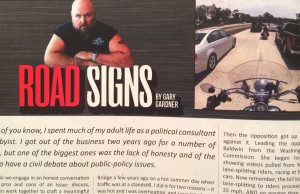 As most of you know, I spent much of my adult life as a political consultant and lobbyist. I got out of the business two years ago for a number of reasons, but one of the biggest ones was the lack of honesty and the ability to have a civil debate about public policy issues.
No longer do we engage in an honest conversation about the pros and cons of an issue, discuss, debate, then work together to craft a meaningful policy that accomplishes a goal that works for everyone. Believe it or not, when I got into this business in the mid 1980s, for the most part, we did just that. Now? It’s a rare thing.

Take the hearing on the proposed bill in Washington state to allow motorcycle riders to lane-split. Right now only California allows lane-splitting (and only because their law, unlike the rest of the rest of the states, doesn’t explicitly prohibit it.) For those of you who don’t know what lane-splitting is, a motorcycle is entitled to use the full width of a lane on a highway, and may be operated two abreast in a single lane. However, a rider may not pass a vehicle in the same lane unless the vehicle is a bicycle, and may not ride between lanes of traffic. These are explicitly spelled out in law.

The proposal in Washington would allow lane-splitting as long as the rider was traveling 35mph or less, and at no more than 10mph over the speed of the traffic flow. In other words, if I-5 is jammed and the average speed is at 10mph, a motorcycle rider can ride between the lanes of vehicles if the rider is going 20mph or less. If traffic has ground to a halt, the rider can ride between the lanes at no more than 10mph.

There are pros and cons to this, and I’m not going to pick a side or take a position on the wisdom of this bill. I will say that I’ve lane split only once – when going across the Oakland/San Francisco Bay Bridge a few years ago on a hot summer day when traffic was at a standstill. I did it for two reasons – it was hot and I was overheating, and I was late for an appointment. I debated with myself whether or not to do it, but after a dozen or so other riders passed me I gave in. To be honest, it was rather scary, and I could do no more than 10mph at best and had to slow down often to weave past cars close together or duck mirrors on large SUVs. It’s not something I’d do regularly.

Spending the winter in Palm Springs again this year, I see riders on I-10 flying at 50mph or more between cars on I-10, zig-zagging all over even when traffic is flowing at the speed limit or more. This seems to be the norm here in California. I can tell you that in casual conversations with riders and non-riders here, nearly all of the riders and all of the car drivers I’ve spoken with detest the practice, especially the car drivers. In a more formal survey, done by the California Office for Traffic Safety, three-quarters of drivers interviewed thought lane-splitting was unsafe. Almost half thought it was illegal. Two-thirds said they disapproved, and a shocking 7% admitted they had swerved to block a motorcycle trying to lane-split. 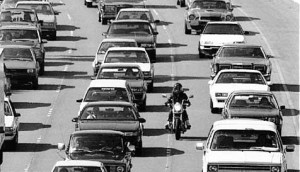 On the pro side, it takes motorcycles off the road and gives more space to cars in a crowded freeway, and keeps air-cooled bikes from overheating. It also could reduce rear-end collisions where a car hits a rider. There are legitimate reasons for and against lane-splitting. In a democratic society, we ought to be able to debate the merits before our elected policy makers, who then also debate amongst themselves and decide the issue based on the relative merits. But that’s not what we have happening.

The members of the motorcycle community who testified in favor of this bill did a great job presenting the reasons for allowing lane-splitting. They put forth arguments and valid statistics to back up their rationale. They fairly and accurately presented their side.

Then the opposition got up to make their case against it. Leading the opposition was Shelly Baldwin from the Washington Traffic Safety Commission. She began her presentation by showing videos pulled from You-Tube of reckless lane-splitting riders, racing at high speed between cars. Now remember, the bill being discussed limits lane-splitting to riders proceeding no faster than 35mph, AND no greater than 10mph above the flow of traffic. NONE of the videos presented by the WTSC showed that. In fact their video was even called into question by Senator Tim Sheldon the sponsor of the bill as being misleading and not accurately describing the lane-splitting that would be allowed under the bill.

The only legitimate opposition argument came from the State Patrol who said that a driver education component would be needed to keep vehicle drivers from intentionally hitting or opening a door into an oncoming motorcycle rider. And given the attitudes of California drivers in that survey I mentioned earlier, (as well as the numerous negative comments from drivers in the comment section of news articles on the bill) this would probably be a wise thing to do if this bill should pass.

But alas, this type of dishonest behavior is not uncommon in politics these days. Debates now consist of destroying and exaggerating the other side in an effort to scare rather than educate and inform. I myself haven’t made up my mind about the wisdom of this bill, but I expect now that most legislators, all of whom drive cars and only a miniscule percentage ride motorcycles, will not look at the pros, but only at the fact that lane-splitting will likely irritate them and their constituents, and they will remember only the exaggerated videos presented by the WSTC. It’s too bad because a legitimate debate would help me make up my mind as well. But we don’t see that in the policy-making arena anymore. It makes me sad, but it reinforces my decision to leave politics in my rear-view mirror.