When I got the new bike just before heading to Palm Springs for the Winter, I realized it needed a new exhaust system -- for the sound as well as the power.  Unfortunately, in California it is against the California Air Resource Board regulations to tamper with or alter stock exhaust systems that meet CA Air regulations (i.e. the "California Emissions" that you hear of). So my only choice was wait until I got back to Seattle, or take a road trip across the desert to Phoenix and have the work done there. I'm sure you know which one I chose. Draw a straight line East from Palm Springs to Arizona and you get Phoenix about 250 miles away. Kinda like driving to Spokane from Seattle, though not as pretty. 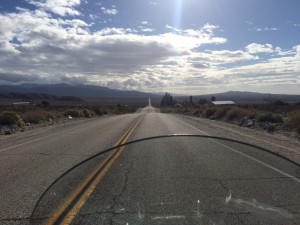 And while it's been sunny and unseasonably warm in Palm Springs - even approaching 90 degrees, wouldn't you know the day I decide to leave is the day that a mass of Seattle-esque weather decides to invade not only Palm Springs, but Phoenix. It rained overnight, though it was dry when I woke up, but it was cool -- in the 50s. I didn't bring down really warm riding gear, so I waited a bit for it to warm up to at least 60 before I left. There is no back road to Phoenix at all. The only direct way to Phoenix from the Coachella Valley is straight down I-10 for 250 miles. I could meander, and you know I love to do that, but this would have meant a nearly 450 mile day too, and so I just went for the freeway. But leaving my place in Desert Hot Springs I could take a remnant of old US-60 for about 25 miles, and since it was "direct" and was BEFORE the freeway, I decided to take it. After all I'd be sitting on the damn Interstate all day, so at least get warmed up on a back road right?  It was cool and cloudy, but the desert smelled wonderful as it always does after a rain storm.

Where Dillon Road hits I-10 in Coachella, I stopped for a quick tank top off. As I pulled into the gas station another rider, on one of those German sewing machines that is a BMW touring bike was stretching his legs too. I asked where he was coming from and he said "Dallas". "So you came in on the 10 just now, hows the weather?" "Dry" he said, "you should be fine." As I pulled out a sweatshirt to put on under my jacket, I asked where he was headed and he said Mt. Shasta in Northern California. "I'll just go down I-10 and up I-5." I froze in time. Oh no no no no no.  I asked if he really wanted to drive through LA traffic?  "No, not really", so I told him how I'd head that way: Up through Yucca Valley on CA-62, and then over towards Victorville on CA-247 and from there pick up CA-58 down to Bakersfield and up CA-99 to Sacramento and then pick up I-5. He was "wait, how did you remember all that?" So I dug out my Harley Atlas and showed him and he walked over to his sewing machine bike and promptly plugged it into his GPS. He said "it's a little longer but I have time -- thanks!" I said "beats driving through LA on LA freeways" as I waved goodbye and rode up onto I-10 East.

At about the 70 mile mark I decided to pull off at one of my favorite photo locations to see how the light was and maybe take some shots in and around and of a wonderful abandoned gas station/cafe that I'd photographed before -- one that still has the old pumps standing out front. It's in the "town" of Desert Center, a mile or so off the freeway, on a road that leads to a rutted frontage road. To be honest, I'm surprised the pumps have survived and not been stolen. Hell, I'm tempted to go get one myself in the middle of the night! (For historical preservation purposes in my living room.) It was good to get off the bike and stretch and wander for a bit, and I took a few shots, trying to be creative. 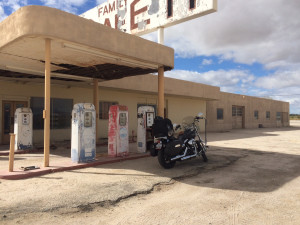 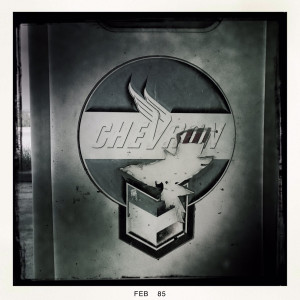 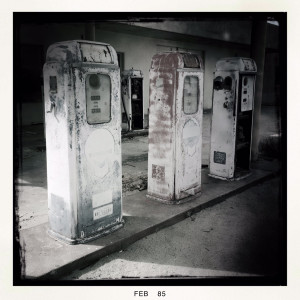 But while I was walking about and taking pictures, an older lady in a rather beat up Nissan Versa with a handicapped plackard hanging from the mirror pulled up.  No one ever comes by here so I was surprised. I was sitting on the bike looking over some shots and she pulled up by me and rolled down her window. Pulling the cigarette out of her mouth and in a hoarse whisper asked me if this place was open? I tried not to laugh or roll my eyes, but come on!  Does it look open? With these ancient pumps with no hoses or nozzles, and the roof caving in! She told me she needed gas, and I said that the nearest gas station was 15 miles West at Chiriaco Summit. I gestured towards the West, as I was explaining that to her, expecting she'd make a quick turn and head back to the freeway and go West. However, my gesture must have indicated she should go down the old frontage road and off she headed without even saying thank you. The frontage road eventually does connect back to the freeway, but it's some miles down, and I assumed all was well but in the back of my mind I wondered if this old lady was going to 1) make it to a gas station, and 2) make it to the freeway.

I took a few more shots and headed out myself, taking the ramp onto Eastbound I-10 with the flow of trucks and RVs and throttled up to 75mph. One nice thing about the new bike is it has a significantly bigger engine than Angus did, so I can quickly get up to speed on the freeway. I sat back, stretched my legs out and settled in for a 70 mile ride to Blythe where I planned to gas up again and get off and stretch. About half way there though, I was riding in the stream of traffic on the freeway, passing me on the left is the Nissan Versa with the old lady in it, headed back East. Now she didn't indicate to me that was where she was headed when she asked about gas, and I'm still scratching my head as to how she got going that way and if she got gas or not -- and judging from the elapsed time I don't think she did -- but she passed me hell bent for someplace East of where we were, smoking another cigarette as her handicapped plackard dangled from her mirror, and I didn't see her again.

I pulled off in Blythe for some gas and a stretch, and looking ahead there was another blob of Seattle weather further down towards Phoenix. Meanwhile Seattle has been sunny and 65. On the ONE day I was traveling, that was the day the weather came in. And while the rain in the desert was light, and it made things smell fantastic, it was still an annoyance. I got damp a few times, and it was a bit chilly. I put on every garment I had in the saddle bags - thermal undershirt, tshirt, hooded sweatshirt, leather summer weight jacket and finally my rain gear on top of it all. I felt a bit like the Michelin Tire Guy, but I was relatively warm and mostly dry.

The freeway crosses the Colorado River Stream Creek Trickle here and I'm in Arizona and back in Mountain Time. The Colorado really is barely a trickle, having been sucked away for other uses up stream, so there's not much left by the time it gets this far. And further down a ways whats left gets diverted into the Central Arizona Project and so about a tea-spoon of water actually gets into Mexico and the Pacific Ocean. I drove a little around town looking for some old ghosts but only found one old motel. 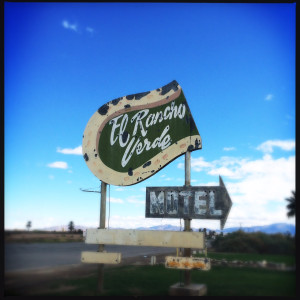 The rest of the ride was uneventful across the desert. The mega-sprawl that is Phoenix now starts about 40 miles out, and the whole place now looks and feels like the vast Southern California megalopolis. There's still a few landmarks from my days here, and I've been feeling kinda nostalgic for Phoenix and my years here the past few months which I'll write about in a day or so after I spend some time reconnecting with the Valley of the Sun this week.
Subscribe