And the winter is just flying by. Here we are already half way through February. My column in QuickThrottle's February issue is a somewhat satarical look at Washington's helmet law, and the fact that bicycle riders are now getting into the act -- complaining about having to wear a helmet when they ride. And as we all know the bicycle Nazis in Seattle tend to get their way more often than not... Enjoy. 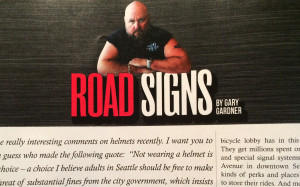 I’ve read some really interesting comments on helmets recently. I want you to see if you can guess who made the following quote:  “Not wearing a helmet is my personal choice – a choice I believe adults in Seattle should be free to make without the threat of substantial fines from the city government, which insists on carrying on with a mandatory helmet law.  For one, the data on helmets is mixed.  The Feds have recently repudiated a 1989 study for example done in Seattle that claimed that helmets reduce the risk of head injury by 85%.  That’s the study on which our mandatory helmet law is based…”

Or there’s this one:  “If you fund and build the master plan, then I’ll reconsider the pros and cons of helmets, and when I do, I’ll be making a free and informed choice – democracy! But I refuse to wear a helmet because a stupid, backwater law tells me I have to.”

Was it a group of motorcycle riders from one of our rider advocacy groups testifying before the legislature in Olympia?  Nope.

Or how about this one: “If your answer to the danger of traffic is a helmet, you’re asking the wrong question. It’s not a question of whether a helmet would make a difference if you are hit by a car or truck: That vehicle should never have hit you in the first place. We shouldn’t spend our energy trying to make a collision possibly a little less bad when we could put our efforts into preventing that collision from happening at all.  It’s also the wrong focus for a moral reason. Take the example of passive smoking; We could “solve” the problem at a stroke by making nonsmokers buy and wear gas masks all the time. This would, in a sense, “work”, but if you suggested that idea, everybody would instantly see how unfair it is to demand the innocent victim purchase and use a product to protect themselves when the risk is forced upon them by others.”

Was it a lobbyist for the highway traffic safety commission?  Wrong!  Thanks for playing. Guess again.

All of these quotes were given by members of the pro bicycle riding community in Seattle during a recent discussion in the Seattle alternative newspaper “The Stranger” regarding mandatory bicycle helmet laws.

Do these arguments sound rather familiar?  I must confess I very much am enjoying the rather delicious taste of schadenfreude coming from our non-motorized two wheeled riding friends as they complain to high heaven about their own helmet law in Seattle these days. You know what schadenfreude is don’t you?  It’s the feeling of enjoyment that comes from seeing or hearing about the troubles of other people.  And haven’t we all used these arguments at one time or another dealing with the motorcycle helmet law?

There is no state-wide law requiring bicycle riders to wear a helmet – just a handful of   city ordinances, including Seattle, that require riders in the city to wear one. It was one of the major hurdles in implementing the city’s new bike-share program downtown – how do we comply with the mandatory helmet law? The city solved the problem in the typical Seattle way – providing free helmets to use with the bike share program. And you thought using rental bowling shoes was unsanitary? How about some free motorcycle helmets for us eh?

Now we’ve all seen the immense power the bicycle lobby has in this town haven’t we? They get millions spent on private bike lanes and special signal systems running down 2nd Avenue in downtown Seattle. They get all kinds of perks and places to park, and racks to store their rides. And most of all, they don’t pay a goddamn dime for any of it! If only we motorcycle riders were so lucky!

Well if the spandex wearing hipster bicycle crowd is now starting to complain about their helmet law you can bet your bottom dollar our city politicians are going to listen to them and I wouldn’t be surprised in the slightest if they caved in to them either. Wouldn’t that be ironic, as well as somewhat discriminatory.

You know maybe our riding groups should maybe team up with the bicycle groups – perhaps form some sort of “two wheeled caucus” or super PAC, and lobby for all things relating to riding on two wheels?  We might get some priority parking, lower tab rates, better ferry fares, and even a repeal of the dreaded helmet law!

I mean if the downtown Seattle hipster crowd is offended by having a nanny state tell them they have to ride their bikes with a helmet on, it sure beats a bunch of us grizzled old bikers crying about the same thing and not getting any results. Washington and Seattle politicians fall all over themselves to win the favor of the hipster urban bike rider crowd. If we throw our lot in with them we might actually win. Of course we’d probably have to give up wearing leather and eating steaks and hot dogs, and we’d have to drink white wine and hug a tree or two, but it’s a small price to pay to get rid of the helmet law don’t you think?