So suddenly it's already half-way through January. I mean really, where does the time fly?  The Washington State Legislature started their session earlier this week, and for the second year in a row now I'm enjoying it from the sidelines 1,000 miles away in the sunshine and warmth of Palm Springs. I do enjoy reading some of the shennanigans from the one news clip service I subscribe to and the Seattle Times online version, and while I don't miss being there, I do miss my friends and former colleagues with whom I spent a lot of time with.

As I put the finishing touches on my February column for my publisher yesterday, I realized it's time to post the January version. I was pleasently surprised to actually get an articulate and well reasoned letter from a reader the other day as well, although I think he seems to miss my point and accuses me of being some sort of tea-party guy who wants great roads to drive on but doesn't want to pay for them.  After reading their letter my publisher said: "HOLY CRAP - An articulate letter from a thoughtful reader! But he is on to you being a closet Conservative! I always knew I had to keep an eye on you and your Tea Party pals! LOL"  Me? A closet conservative? I mean really?  An out and proud libertarian yes, but a conservative?  Perish the thought! Hell someone might as well accuse me of watching Fox news!

My reader went on to say:  "Another month and another Road Signs column with you whining about Washington roads. I am going to take a wild guess that you are a conservative. You do not like taxes or government spending. You do like good roads.....well everyone likes good roads. It cost money (tax money) to maintain, repair and build good roads. Conservatives (Tea Party) do not like to spend tax money. In fact, they do not like taxes at all. Do you see a correlation here? You cannot continue to cut taxes (state and federal) and expect to adequately fund infrastructure, schools and public safety. What we all need to do is think a little more about the people we are sending to Washington DC and the state governments. If we want good infrastructure, if we want good schools, if we want good public safety then we need to start electing people that will support those things."

Now I've always said I support paying for good roads -- never once have I demanded anything for free. What I have said is that we have a spending priority problem in Washington, in addition to a shortage of funds from declining gas taxes that are used for roads, and we have to develop a long term solution to that. What we DONT need are more "art projects" along the roads, and fancy bike lanes that are paid for out of gas tax dollars and not by the people using them. But that point seems to get lost on a few folks -- maybe it's too deep.

At any rate, I have to say I really like my January column and if I may so humbly say so, consider it one of my better ones. So here you go... 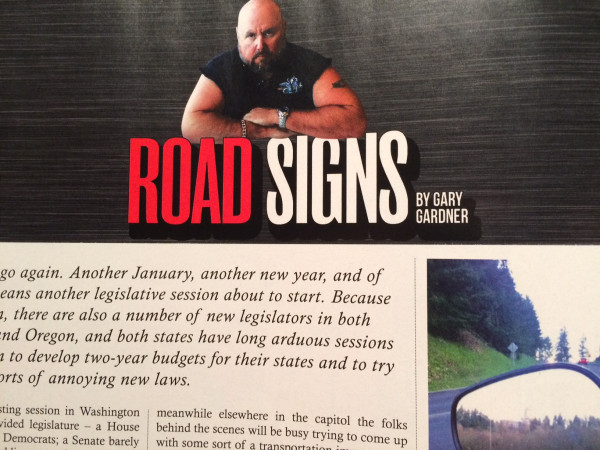 Well here we go again. Another January, another new year, and of course that means another legislative session about to start. Because of the election, there are also a number of new legislators in both Washington and Oregon, and both states have long arduous sessions ahead of them to develop two-year budgets for their states and to try and pass all sorts of annoying new laws.

It will be an interesting session in Washington since we have a divided legislature – a House barely controlled by Democrats; a Senate barely controlled by Republicans; and a Governor barely independent enough to not jump exactly as high as his union and environmental puppet string pullers want him to.

Washington also is a state beset by revenue spending priorities way out of whack with the tax revenue that comes in, a crumbling transportation infrastructure, and a Supreme Court that thinks the legislature is in contempt of court for not spending enough on education while at the same time not defining what “enough” is. Pretty crazy right? Sounds like California in the early part of this century.

On the motorcycle front, as riders what can and should we expect this session? I know what I’d like to see us take on. But alas, unlike our other two-wheeled riding cousins, the bicycle riders, we motorcycle riders are too damn fractured and independent to look at any kind of unified effort on big picture issues that could have a meaningful impact on all riders and road users.

So instead of all riders working together to address chronic issues like road and traffic improvements and how to pay for them, or inequities in licensing fees and toll charges for various vehicles, or improved safety education for drivers and riders, we’ll see a rerun of the usual Quixotic windmills to tilt at.

I predict (play trumpet fanfare sound effect here) that we’ll see a bill to repeal the helmet law -- not that it’s as much of a prediction as it is a certainty. And with Republicans in control of the Senate, it might even get a committee vote, but I won’t bet more than a beer on even that happening.

And while our riding groups fuss about helmets, meanwhile elsewhere in the capitol the folks behind the scenes will be busy trying to come up with some sort of a transportation improvement package.  Washington and Oregon both must do something this year, or face a road system that will have the state placing weight limits on bridges and routing detours around bad sections. We MUST be a part of those discussions otherwise we’ll get run over. What good will having helmet choice be if we don’t have decent roads to ride on or we can’t afford the gas, tolls, and license fees to get the bike on the road to begin with? 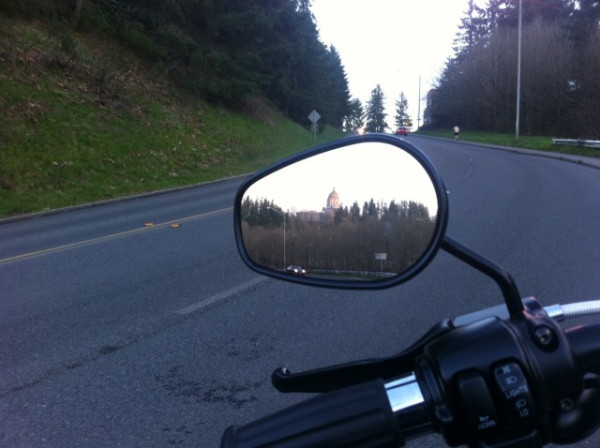 Then just one floor below the legislative chambers in the Capitol, our Governor is plotting with his environmentalist buddies how to implement a “carbon tax” as a way to impose his climate change agenda without having to go to the legislature. The Governor’s “carbon reduction” mandate would, if fully implemented, add an additional $1.47 to the cost of a gallon of gas according to the state budget office. All this just as we were getting a nice healthy reduction in gas prices, thanks to all that new oil coming from North Dakota.

So if the Governor gets his way with what his advisors claim will be a “package of measures”, we will pay much more to both heat our homes and drive our vehicles. A big part of that gas price increase will likely come from the Governor going around the legislature to require a “clean fuel mandate” -- in other words, more ethanol and other chemicals. Just wait and see what that does both to the guts of your V-Twin as well as the contents of your wallet.

California is already well on its way to implementing this, and Oregon is looking at this as well, and with all three branches in that state controlled by Democrats, they have a chance of it happening there. Paying more for gas AND not being able to pump it ourselves should make riding in Oregon loads of fun next year. The only thing standing in the way of that happening in Washington will be our divided legislature.

Would it be too much to ask for our rider advocacy groups to join ranks and make a concerted effort to be a part of these vital discussions? These issues will have a far greater detrimental impact on our ability to ride “free” than even a successful repeal of the helmet law would ever have, something that has a snowball’s chance in hell of passing.