Back in 2006 I bought a brand new Harley-Davidson FXDBI Street Bob.  It was the first year for this model, and I bought one of the first ones in Washington when it came out.  I'd fallen in lust with it from the Harley catalogue and knew it would be a perfect bike.  I bought it from Destination Harley in Silverdale, WA, across the Sound from me.  The old Downtown Harley didn't have one on order or coming in and Destination had one set to be delivered.  I had them add a bunch of extras -- saddle bags, forward pegs and other things, and I picked it up in late September of 2006.  Down the road I named him Angus -- a good strong Scottish name, and he was black like most angus cattle are.  This photo was taken the day I brought him home. 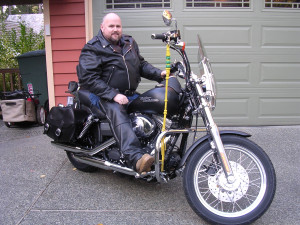 And as you all know, I've since ridden him Coast to Coast and Border to Border -- hence the license plate C2CB2B.  I put 73,262 miles on him over the years.  He's been in a couple of minor wrecks, and been put back together good as new.  However, coming back from Utah in September, and on subsequent rides he's been acting up a bit, so in preparation to sending him down to Palm Springs for the winter, I rode in to Lawless Harley (the old Downtown Harley) in Renton for a going over.

Alas, it was bad news.  The rim and spokes on the front were bent, the brake rotor out of alignment, and the neck bearings were gone.  Thanks I'm sure to the deplorable roads in Seattle. All told it was almost $3,000 in work. I was on the phone with my friend Beth who is a service writer at the dealer discussing options when my friend Vik from the sales floor asked Beth it it was me on the phone and demanded she hand the phone over.  Vik had a plan.

All summer I'd been trying to sell my custom choper that I built back in 2009 but to no avail. Apparently the fat-tire chopper is now gone out of style and although I'd dropped the price to $12,000 OBO, I had no bites even though it was listed in several national biker sales magazines and web pages. I was hoping for the cash from selling it to keep me going in my semi-retirement, but it wasn't forthcoming. Well, Vik had in stock a 2011 black denim FXDB Street Bob nearly identical to Angus but with a bigger engine.  And knowing how dear Angus is to my heart, she concocted taking all the best parts off Angus and putting them on the new bike while taking the chopper and Angus in trade, and giving me back a new bike with ony 1,100 miles on it, a bigger engine and locking saddle bags, as well as some nice blue pin striping.  All this with no cash out of pocket on my end.

I thought about it for a while and decided to go for it. It solved the problem of how to find money to fix Angus, and it got rid of a bike I couldn't sell anyway, and I didn't end up paying anything.  I listed all the parts off of Angus I wanted transfered over and they got to work. After all it's still more or less Angus -- same model, same color, and about 25% of the same parts.  I even kept the windshield with my travel stickers all over it.

So meet the new bike.  I love the name Angus, but my friend Quincy says I can't transfer the name or the old bike will haunt me.  I don't know if I buy that, since for all intents and purposes this is Angus.  Maybe I'll name him Angus Junior, or AJ, I don't yet know. And if Angus haunts me, well it's a good haunt.  I don't want to lose him as we had some great times together.  So naming the new bike in his honor makes sense to me. 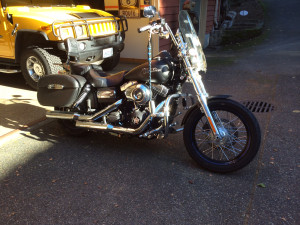 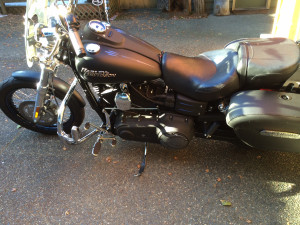 And yes I'm sad that Angus is gone -- after all we spent more than 75,000 miles over eight years together. We've gone through it all, and he was an amazing bike that brought me many happy hours in the saddle.  So I toasted him with a dram of 30 Year-Old Highland Queen Scotch while sitting on Angus Junior in my freezing cold garage. Saying goodbye and welcoming the new member to the household. The spirit of Angus lives on in Angus Junior. He's getting shipped to Palm Springs in a few weeks and come January, we'll be prowling the Coachella Valley and Southern California on some roads that will be new to both of us -- with hopefully another 70,000 miles to come down the road.
Subscribe