It's been a quiet month, where I spent a few weeks in Palm Springs getting ready for staying the Winter there again this year, and came back to the usual PNW rain and cold of November. Kinda feeling the writing doldrums too -- maybe its the fall weather, I don't know.  Just haven't felt the urge to write or do much of anything.

Don't get me wrong, I love the Northwest in the fall. It's gray, wet, a sweater for an autumnal chill in the air, the smell of a wood fire and damp leaves and my backyard is gorgeous. 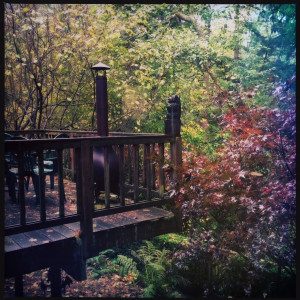 The desert and Palm Springs are nice, and I'll be back there when the weather here turns winter, but little compares to the Northwest in fall. But the change in weather does certainly affect ones mood -- and overall health too. I had my flu shot, but feeling all sorts of flu-ish symptoms the last day or so.

And while I'm putting the finishing touches on my December and January columns for the magazine now, it's time to post November's version:

In October the price of oil hit a four year low – due mainly to the increased oil that is being developed in North Dakota and in Texas. The good news is that gas prices have dropped somewhat accordingly and seem to be going down further, although Washington is usually in the top three or four areas for highest gas prices. This is because of our second-highest in the nation gas tax at 37.5 cents.

And yet with that second-highest gas tax, we have what amounts to the worst roads anywhere I’ve ridden all summer. This is mainly due to the decline in gas tax revenue that is a direct result of people driving less, and driving more fuel-efficient vehicles. It’s a natural cycle that perpetuates the problem – the higher gas prices go, the less people drive, and the less gas tax revenue produced and so on. Simple economics.

As someone who bitches constantly about the state of our roads, I understand the economics of lower gas tax revenue. Really I do. And I realize that in the long run, the gas tax isn’t going to fund all the needed road repairs and construction. So what do we do?

Well we could stop spending money on “art” like metal salmon sculptures at freeway overpasses and transit stops for one.  Washington requires 1% of the funds of a given project be spent on “art”.  A nice idea when there’s lots of money, but really dumb when we don’t have money and are in desperate need of road repair. But that’s not gonna happen. We could stop building infrastructure like bike lanes for people who don’t pay any taxes to use the roads, like the $1.5 million the city spent on that 2nd Avenue bike lane I wrote about last month. I know, I must be delusional for even suggesting it here in the Pacific Northwest. We could use gas tax revenue ONLY for road repair and construction plain and simple. But alas, that cat has left the barn.

What we need in the long-term is a way to replace the gas tax with something that will actually raise money to fund the things that a gas tax is supposed to fund. Note I said REPLACE the gas tax not in addition to. One intriguing idea would be to transition from the gas tax to a road usage charge, making those who actually use the roads pay for the roads.

I am a fan of user fees instead of taxes. I firmly believe I should only pay for what I use, and shouldn’t subsidize things I don’t. I drive a lot. I pay a lot of gas taxes, which right now aren’t being used as I would have them be used – to fix the damn roads. It’s paying for a lot of other stuff, just like most taxes we pay to the government.

In this fantasy world, ideally we would somehow charge usage fees based on weight and damage caused to roads (thus big semi trucks pay more than Vespa scooters). We could charge by the miles driven, so that vehicles who use the road sparingly would pay less than those who drive all the time. We could charge by the amount of fuel and or space consumed, so that motorcycles would pay less than cars and large trucks. And we could charge all road users, so bicycle riders would actually contribute something to the roads they use.

Exactly how one does all this I don’t know. Perhaps we could install chip readers that measure miles driven, with rates set by weight, displacement, wheels, or axels. Insurance companies are doing this now and lowering rates for people who drive less. The technology exists. You would need an infrastructure for collecting and administering the tax as well, and I’m sure lots of people would yell about “privacy” and “intrusion”, but if it’s a simple miles driven per year measurement it’s no big deal to me. There’s also issues of how you “capture” revenue from people using the roads who don’t pay a user fee – like drivers from other states for instance. But we are a smart people, we can surely figure something out if we put our heads to it.

And I’d even be willing to be a part of a pilot program if one comes to pass. Put a chip in my bikes and my truck, measure my miles, bill me accordingly, and give me a credit against my already paid gas tax that I pay at the pump. See how it works. I’m game.

All of this will require a massive shift in thinking by all of us about how we pay for roads though, and that takes a lot of time. We as group that’s sport and passion center on good roads need to pay attention and start thinking about this. In Washington the State DOT is timidly suggest looking at this, and California and Oregon DOTs are already beginning active planning along these lines, trying to figure out how you could do this. But regardless we do know one thing. Long term, the gas tax will not bring in enough to maintain our roads. We should think about how to fix that sooner rather than later.