Fall has arrived --  days are shorter, it's much cooler, leaves are changing and the spiders are everywhere. Time to wind down the riding season as well. Friends who store their bikes in my garage over the winter have been bringing bikes by and it looks like a Harley-Davidson dealership inside.  I'm about to start writing my November column for the magazine, and so it's time to post the current October one. I've gotten a couple of nice favorable emails on it, but I expect it will also tick off a few bicycle riders...

OK, I want a dedicated lane of my own now. Not just for me, although that would be nice – a “Gary” lane, only for me. The rest of you get the hell out of the way. No, I want dedicated motorcycle lanes. If the bicyclists can have their own lane I want one too. Especially if the city is going to spend upwards of $1.5 million dollars to outfit it like they recently did for a bike lane along 2nd Avenue in downtown Seattle. I mean if they aren’t gong to spend any money making the roads easier to drive on for those of us who do pay car tab and gasoline taxes to maintain and fix roads, then they should at least give us a lane so we don’t have to contend with idiot drivers in cages who don’t see us. That’s the bicyclists argument, and they don’t even pay any road use taxes. It worked for them. Don’t you think those of us who do pay road use taxes should get something too? Why can’t we get that?

You know why we can’t? We aren’t as organized as they are. We don’t speak with one voice like they do. We don’t contribute to campaigns and work with elected officials like they do. They work the media to get them on their side. In short, they play the game and they play it to win. We bikers don’t. I’ve never understood why we don’t. There is great power in vocal numbers and there are a lot of us. There are more of us then there are bicycle commuters I’m sure.

Bicycle riders face the same hurdles we do as motorcyclists. Cars don’t see us, and they weigh more than we do. Cars always win in an accident. They have been complaining about it as long as we have. Their rider groups embark on education campaigns like ours do. They try to get the public to pay attention to bikers just like ours try to get them to pay attention to motorcycle riders. And to be truthful, bicycle riders face the same “perception” issues caused by a small minority of their population that we riders do – that they are obnoxious scofflaws who flout the law etc.

However they are organized and the media loves them. Two things we riders don’t have going for us. Case in point: on August 29th of this year a bicyclist was killed along 2nd Avenue in downtown Seattle when a box truck turned left over the bike lane in front of her and she slammed into it. It was a very tragic accident indeed, and one that has happened several times along 2nd Ave. But as common as it is for bicycle riders, its an even more common occurrence for us motorcycle riders. How many motorcycle riders have been killed by drivers this year – especially drivers who turn left in front of us? But this is the difference between us and them. They have the ear of the policy makers, and within a day – a single day – the mayor had announced that they would spend $1.5 million dollars to build a separated bike lane on 2nd Avenue complete with its own set of signals. 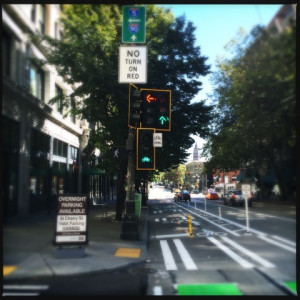 Within two weeks they took out a traffic lane, moved the parking spots out, and up sprang barriers to keep cars away from bike riders. They installed separate turn signals for bike riders and cars and prohibited turns by drivers. They painted green boxes where bikes could ride to the head of the line and leave before cars, and totally screwed up 2nd Ave for through vehicle traffic. And in the spate of 10 days it was built and up and running, with the mayor himself cutting the ribbon to open it.

And to top it off the city has also applied for and received an additional $5.8 million dollars from the federal highway funds (i.e. gas tax) for additional separated bike lanes in Seattle. It would sure be nice if some of those funds that were paid for by vehicle drivers and motorcycle riders could go for some projects that benefit us don’t you think? Maybe fill in some chuck holes, or make the roads safer for us too! I would dare say that more motorcyclists get killed each year than bicycle riders, yet we don’t get the same reaction from policy makers, and more often than not the prevailing attitude is “well you shouldn’t ride a motorcycle then…and wear your helmet”.  Where are the mass rides, and budding memorials and outpouring of support from the policy makers when one of ours gets killed by a driver?

We don’t get that because we aren’t as organized at the bicycle riders are. We don’t have the political clout they do that comes from organizing, campaigning, and raising funds for candidates that support what bike riders want. Hats off to the Cascade Bicycle club for their political acumen and power. And ironically they pretty much get what they want – the city listens to them, and then they complain they don’t get everything they ask for. We as motorcycle riders can stand to learn a bit from them if we ever want to get anything that benefits us.

And in the mean time if we can’t get a lane of our own, well then let us ride in their lane. What do you say? Its separated and even their signals look like little motorcycles. And maybe I won’t have to worry about someone turning left in front of me for a change.