I have to say we have had perhaps the best summer weather-wise that I can remember in a long time this year in the Pacific Northwest. Sunday was no exception. Clear blue skies and a temperature in the mid 70s -- quite unusual for October. In other words, near perfect riding weather. So after doing my Sunday chores of laundry, dishes, and sweeping the hardwood floors, I treated myself to an afternoon ride. I didn't have any specific location in mind, just something that avoided freeways and let me wander along quiet back roads and enjoy the atumn leaves. As I drove through the Georgetown neighborhood of Seattle along the busy rail lines leading into and out of the city I stopped to watch a train go by, and decided I'd head East up into the foothills of the Cascades along the old Northern Pacific Ralway line up Stampede Pass.

This is a very pretty part of King County, and this once busy transcontinental railway is now fairly quiet except this time of year when it is used to carry massive long grain trains from the prairies on the East side of the mountains, and then taking the harvest to the port and the empties back to wheat country to be reloaded. I really had hoped to see a train along this line -- something I rarely ever see.  But if I didn't I was OK with that as well, and I'd just enjoythe ride on Angus as we follwed the Cedar and Green rivers up into the mountains.

Fate smiled on me though, and as I turned South off of the Retreat-Kanaskat Road and onto Cumberland Road headed towards Enumclaw where the road crosses the railway on a bridge, I looked down I saw a long string of grain cars sitting there on the railway not moving.  I was in luck.  I was hoping it was an upbound train waiting for either a downbound to pass, or perhaps having just passed one, waiting to head up the mountain.  I twisted the throttle on Angus and he responded and sped up the road to get ahead of the train. I passed the locomotives pointed uphill and knew where I wanted to head.  I had seen this rather spectacular high bridge over the Green River many times while riding this road, but I've never seen a train on it. Today would be the day. 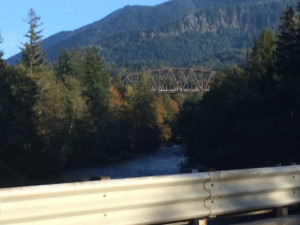 About a mile up the road from where this picture was taken the road curves to the left and crosses the railway just above this bridge, and I rode up to the crossing to watch the train go by. There is something about the roar and power of the locomotives as they pull a heavy train uphill and across a high bridge in the mountains that I can't help but stop and watch. However, as I pulled Angus over to the shoulder I noticed a pickup truck parking and a young father in his early 30s and two young girls about 5 and 8 getting out. I figured Daddy wanted to watch the train go by with his girls as well, but as it turned out that's not why they were here.
As I got of Angus he came up to me and said his girls sure loved riding on "Grandpa's Harley", and I smiled. I said I was just out enjoying this spectacular October Sunday and I was waiting for a train as I'd always wanted to see one go across that bridge. He asked if one was coming, and I told him about the grain train I'd seen a mile down the hill, but that it wasn't moving when I passed it. He said he saw it too, but then he confessed that he was there for a different reason. "My brother died ten years ago today on that bridge" he suddenly said to me. I was shocked by his declaration. All I could say is "I'm so sorry".  It told me that they were swimming in the river underneath and his brother decided to climb up the ladder on the cement columns supporting the bridge. As he got to the top "a train came by and the vibrations and shaking caused my brother to lose his grip and fall almost 200 feet to the base, killing him." I couldn't say anything.  What do you say when a total stranger just tells you something horrific like that?  "I came by because it was 10 years ago today. I wanted my girls to know about him and what happened." 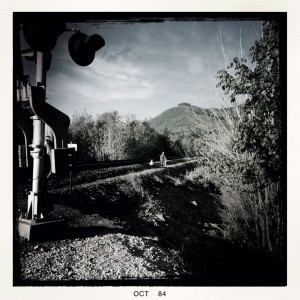 I didn't know what to say, except "how tragic that had to be" for him.  He said "yes it was, and I still miss him -- he was my best friend." I told him I didn't want to intrude and I'd ride away, so he could pay his respects.  And I told him to be careful "there's a train headed up, and I'm not sure if he's waiting for a downbound first -- you should be able to hear the upbound, but a downbound will be very quiet and hard to hear, so please be careful."

He said "thanks, you don't need to go" then he and the girls headed down the tracks about 300 yards to the bridge. So I waited a bit, and truth be told, I worried.  After 10 minutes went by and there was no up or downbound train I thought I'd ride down to where the train was waiting to see if I could ask the engineer when he was leaving, but by the time I got to where the train had been waiting he had just started to move. Getting a huge train moving on an uphill grade takes some time, so I knew I could ride back.  I did a quick U-turn and headed back to the crossing. I heard him blow his horn for a road crossing on the far side of the bridge as I approached where daddy and the girls had headed down the tracks, and was very relieved to see him sitting on the tailgate with his girls -- apparently deciding to watch the train go by as well.

The bells on the crossing gate started to clang and the arms came down. I waited on the other side of the tracks from him in the sunlight so I could take a picture of the train struggling up the hill and crossing the bridge in the autumn afternoon light. 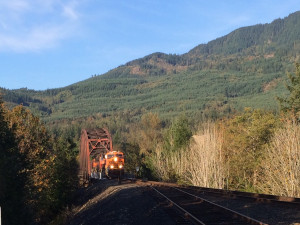 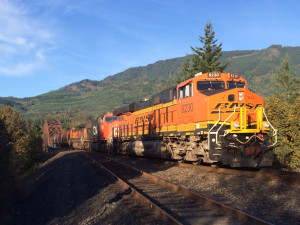 A seemingly endless string of reddish-brown grain hopper cars dutifuly followed the locomotives up the hill towards Stampede Pass -- so many I didn't even count, and I wondered if the girls sitting on the tailgate of daddy's pickup on the other side of the tracks tried to. The last car passed and dissapeared around the curve -- the crossing bells stopped clanging and the arms on the gate rose.  I looked back and the girls were searching the ballast between the rails for smashed pennies and daddy came over to ask if I got my picture.  "I did" I said.  "Did you make your peace". "We did", he said, and "the girls wanted to watch the train" (I bet he did too -- what guy wouldn't?) He asked me if I knew where it was headed "back to the Palouse to get reloaded I expect",  and then I told him a little about the history of the line -- the old Northern Pacific mainline to Chicago, and that the road we were on once went up and over Stampede Pass and because it was Tacoma watershed the road was closed to keep the water clean. I even told him about how the old "North Coast Limited" passenger train had to lock the bathroom doors as it went up this section to keep people from using them as back in those days they flushed onto the tracks. I don't know why but I even told them about my friend Madelon who worked as a nurse/stewardess on that train back in the 1950s, and showed him her old business card. 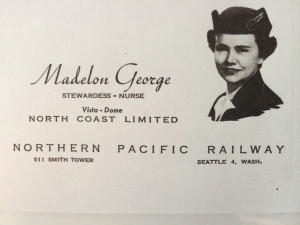 He thought that was really "cool" and we talked a bit more about parents and grandparents. The girls scampered about as daddy and I talked about the area, and about the rail line and the other old rail line that is now a trail over Snoqualmie Pass. Two strangers chatting by the side of the road, one there for the scenery and the train, one to remember his brother, both brought together by time and circumstance and a glorious October afternoon. The girls came up and started asking if I "always came up here?"  and "why?" I told them "yes, I come up a lot -- this is one of my favorite places to ride." Daddy said one day he hoped to get "grandpa's bike".  I warned him though "as someone who's 'grandpa's age' I can tell you I'm not giving mine up anytime soon, and I bet he won't either." He laughed and said "you're right about that." "Then you need to just go get a ride yourself", I said. "My wife is an ER nurse, she'd never let me" he lauged and headed back to his truck, carrying one girl on his shoulder and holding the other by the hand. I watched them as I put my helmet back on and threw a leg over Angus and fired him up. I waved as they got in the truck and headed back down the road. I paused at the intersection and turned back towards Seattle, stopping to look again as I passed by the high bridge.  A bridge which now will forever remind me of a tragic October day in 2004 where a young man I do not know or ever will died -- of a gorgeous October afternoon in 2014 where I learned the story, and as the words of "Mile 416", a song by Jeff Bridges played in my head about the death of someone he never met but felt compelled to sing about after passing a cross marking the site along the roadside:  "I do not know your name, and I will never know you at all, but if it's all the same, your's is a story I will tell..."
Subscribe