The Column That Wasn't

Usually right now I'd be posting my monthly column from QuickThrottle magazine.  However my publisher decided to not run the column I'd submitted last month.  I had written a very sarcastic, although in my mind positive, piece about Harley-Davidson's new electric bike project.   It was based on some conversations with more than a few bikers, and I was, and am, very proud of what I wrote.  However, after I submitted it, my publisher had second thoughts, and didn't want to make any of the Harley dealers who provide a substantial portion of the revenues for the magazine, with a reason to complain, and so he asked me to write something else.  Unfortunately, when he asked me to do that I was standing in a gas station in John Day, Oregon half way to Boise, Idaho on my trip last month.  I didn't have the ability to wrtie 900 new words on a new topic in just a couple of hours.  So he decided to just not run my column last month.   And while I disagree with his reasoning, I respect it in that he makes a living selling advertising and the magazine business is struggling anyway.

That being said, I still really like this piece, and so I wanted to share it.   I hope you enjoy the satire and the sentiment. 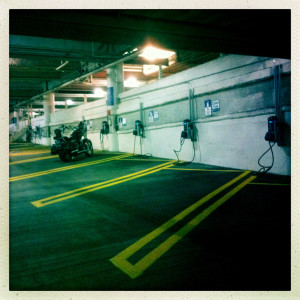 This month’s column wraps up five years of writing for Quick Throttle.  It was in September of 2009 that publisher Mike Dalgaard gave me more or less free reign and the space of 900 or so words a month in this distinguished publication. I know that more than a few people assumed he’d lost his mind and truth be told, maybe he has, as I continue to get to speak my mind (what’s left of it anyway) and annoy many and perhaps amuse a few of you each month, and maybe, just maybe, occasionally change a mind or get someone to think a little bit.

Looking back over these past five years its clear that as much as we want to think things change, in the end, they remain more or less the same. Congress still does nothing but blame the President for everything bad and accomplishes very little. On the state level, the left end of the scale tips things way out of balance, but because the policy and law making process is designed the way it is, the handful of people still left on the right manage to keep what could amount to a runaway train more or less in check.

In motorcycle land, while the landscape has changed a bit with dealers closing or selling, and models and features coming and going it’s pretty much the same faces and same makes and models. The fat tire chopper apparently is now “out of style”, or so I was told by the guys on the “Pawn Stars” TV show. I’m finding this out now after trying in vane to sell mine. Indian Motorcycles as revived by the giant Polaris conglomerate is making a splash in the pond. It remains to be seen though if the splash turns into more than a ripple.

And then Harley decides to try and make an electric bike, as incredulous as that sounds I know. When I first heard about it I thought it was a joke in a satire magazine. Harley? An Electric Bike? Yeah, sure and I’m gonna trade in my Hummer on a damn Prius. But it turns out it was true, and “Project Livewire” is up and touring the country to rave reviews in the mainstream press and to a few bikers, even though it looks like a metric crotch rocket.

Already here people are putting down deposits on something that isn’t even in production yet so they can be the first to have an electric motorcycle. So they can ride to get some gluten free ice cream and a vegan salad maybe. It makes sense. According to Toyota this is the highest per-capital sales market for those damn Priuses.  At least I think that’s how you pluralize it – maybe it’s Prii?  (And I just realized that these electric vehicles can’t be pluralized readily – for instance the Nissan “Leaf”. Is the plural form “Leafs” or “Leaves”?   If Harley goes forward with this they better come up with a name that can be readily pluralized.)

But there is this gross misconception about electric vehicles: that driving them makes some sort of “environmental statement” about saving the planet from terrible carbon pollution. But what most self-righteous Prius drivers seem to forget is that electricity in most parts of the world comes from burning the same fossil fuels that power a gasoline engine. Up here our power comes from hydro dams and windmills, which according to some factions of the environmental world, are just as bad as fossil fuels since dams mess with salmon and windmills are nothing but giant Cuisinarts for birds. Nothing is somehow “non-polluting.” 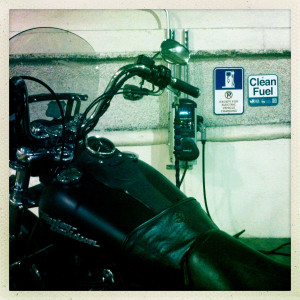 So while all you electric vehicle drivers may think you are saving the planet, you actually are not making one iota of a difference. And if that’s Harley’s marketing ploy to get younger hip riders, I think they missed the mark. Younger hip riders would rather pay less than $20,000 for a bike. There’s your niche market guys.

Meanwhile I’ll go on enjoying my carbon spewing fossil fuel burning 103 cubic inch V-Twin rumbling between my legs and breathing in those wonderful smelling exhaust fumes as I roar out of my driveway and into the wind thank you very much.

But I know my time on earth is as limited as the fossils that fuel my engines, and one day I too will die out along with the rest of my kind (or ilk if you prefer.) The bikers of the future will be zooming around Sturgis on their electric bikes, the town will obviously have to put in some sort of massive magical power plant to produce enough plug-in stations, but that won’t be my problem. So go forth Harley. Change the world with this first step. As a stockholder I applaud the ingenuity and forward thinking and willingness to get out ahead of the curve.

But while I can, let me enjoy the rumble, the heat, and the smell of exhaust, and the freedom of the open road, my fists in the air framing the road ahead, and the wind blowing in my face. An electric bike? Sorry boys. Not for me.