There are days when I love riding by myself.  Out on the road, no one but me and my thoughts -- with nice weather and sunshine and a pretty and quiet back road.  It may seem lonely but its not.  And then there are days when it is lonely and almost interminable.  Today was one of those days.  I think in part because I was headed home, on a bit of a schedule, and feeling a little blue and lonesome after leaving friends and family in SLC and Palm Springs. It was a bit chilly and somewhat cloudy to the East when I left Boise this morning as well -- it had rained over night so Angus looked like he had lots of dishwasher spots on him.  It did make the air nice and fresh and fragrant though.  I headed West on I-84 which was almost empty for an early Saturday morning.   The plan was to exit off in Caldwell and head back West on US 26 to John-Day, Oregon and then North on US-395 to Pendleton and maybe on to Richland, Washington if I was feeling like riding and making good time.  And the first part of the morning I did -- it was sunny and clear and with the change back to Pacific Time, I gained an hour.  I loved riding out of Boise and towards the Snake River through miles of onion fields all being harvested.  The air had a hint of onions and the sun was shining. AND I was vindicated in a way.  That mysteriously vanishing Holiday Inn Express from yesterday WAS THERE!  Right on the freeway where I remembered it.  But it was in Nampa, right on the line at Caldwell, but technically in Nampa.  I'm still not sure why the it vanished from the app, but it does explain the Indian Call Center girl's reaction and it not being listed in directory assistance either.  Surprising since it's often cited as "Nampa-Caldwell".   But I digress... 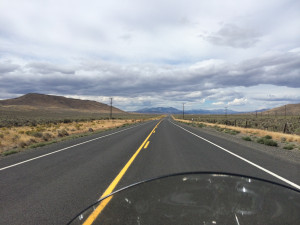 Once you pass through the small hamlet of Vale, Oregon, US-26 becomes a very lonely road.  VERY lonely.  Signs warn of "next gas 100 miles" and you are lucky if you pass another car the entire stretch.  It got progressively more cloudy and desolate the further west I got.  It also got cooler.  So much so that I stopped to put on my leather jacket.  I pulled Angus to the side and got off, unpacked the jacket, and even was able to stand and pee in the middle of the road with nary a car going by.  NOTHING passed the five minutes I took to put on the jacket and have a drink. For some reason this was making me feel sad, and coupled with the cool temperatures and threat of rain, it had me feeling down and just wanting to get this ride over with -- something I rarely feel. 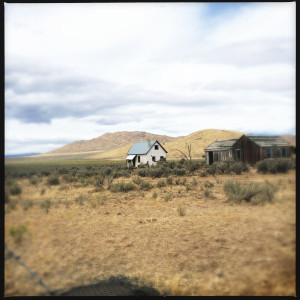 This area of Oregon is surprisingly desolate -- it feels even more so than parts of Utah and Idaho -- though I'm not sure it is.   But on this stretch -- as well as the US-395 stretch going north from John Day to Pendleton, there are signs saying "no gas for 100 miles".  I've seen them as well on US-95 outside of Bend up to the Columbia River.   I don't remember seeing such signs anywhere in Utah, Idaho or even Wyoming, though I've seen them in Nevada.  I guess I don't expect Oregon to be this desolate.  Oregon -- especially on the West side, is much more populated.   The Eastern side, not so much.  Folks have tried to make a go of it out here.  Few if any have made it. 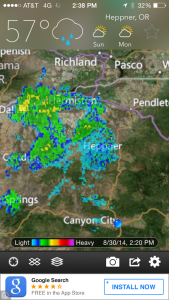 It stayed dry all the way to John Day, where I stopped for lunch for both me and Angus.  I could see some even more ominous clouds gathering off to the North where I'd be heading so I pulled up my weather radar app and saw a large blob of blue and green indicating showers, moving East like a bulldozer right toward US-395.  A large group of bikers was also gathered around discussing the route and whether or not to put on rain gear.  They opted not to -- I decided to shimmy and shake into mine.  You remember what it's like putting on a snow-suit over regular clothes?   That's what this is like.  It's hot and sticky and not comfortable or easy to do in a gas station parking lot.  It's also not entirely water proof.  I've never had a rain suit that is -- they all leak a little, somewhere.  But then again the only thing that wouldn't is a divers suit -- one is riding essentially through a car wash for however long it takes -- complete with spray from your own bike and passing vehicles, as well as all that is falling from the sky.

The further North I rode the wetter it got and the cooler it got too, as I climbed up and over the undulating ridges of the Blue Mountains.  It got so cold I had to stop at a US Forest Service campground and put on my leather jacket under my rain jacket and get out my winter gloves.  This is miserable riding to say the least.  I didn't pass any cars and I don't know what became of the other bike group.  This road is almost as lonely as US-26, and it felt even more so with the rain.  Riding becomes a chore and not fun in situations like this, and I'd even contemplated staying in John Day for a night, and maybe I should have.  I ended up riding 128 miles in the rain before it let up, about 25 miles from Pendleton.

But behind every cloud is blue sky -- something you forget about when it starts to rain.  This is true in life as well as in weather.  We sometimes forget that.   Once the clouds broke as I descended into Pendleton the fresh rain on the just mown wheat fields was wonderful, as was the light dancing off the high clouds.   And with the rain ending, I started to dry out and warm up, and it was a pretty nice ride the last 20 miles or so into town.

After a rain there is usually a rainbow.  When I rode this same route back in 2008 in the spring when things were green I passed a wonderful old grain elevator out in a wheat field South of Pendleton, and captured it with a rainbow. Its one of my favorite pictures and I have used it as the wallpaper on one of my computers for a long time. 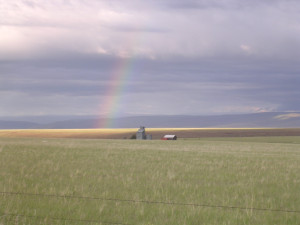 And though there was no rainbow on this trip, I did find a dirt road that lead off of the highway towards that elevator and decided to ride over and get off and stretch a bit and shoot some pictures.  I tend to clench up almost every muscle when riding through storms and so it felt really good to just relax and breathe again and walk about shooting some pictures up close of this cool structure.  I'll likely be adding this to one of the art-photo collections, and I was lucky to get a few images that I think I'll use from this trip. 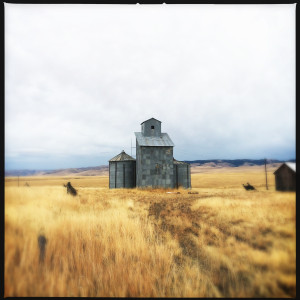 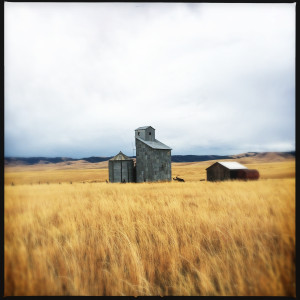 I was too tired and cold to continue past Pendleton into Washington, so I checked into the same Holiday Inn Express that sits out on the Interstate above the town that I'd stayed in on the way down, and wiggled out of my wet clothes.  I put on some dry things and walked across the street to a Shari's -- something I rarely do because I don't like chains unless I have to, but I was too tired and cold to ride into Pendleton itself.  A friend asked how it was and I said "Denny-esque", but the pie was good.  Places like that offer only a homogonized blandness that is only good when there is no other option.

One last sprint of 275 miles and I'll be back in Seattle.  The weather forecast looks good, but even if it doesn't, there will be a blue sky after it starts to rain.  I'll need to remember that.
Subscribe