So THATS Where This Road Goes...

After a week in Salt Lake, with a short side trip to Palm Springs over the weekend, its time to head back to Seattle.  Just when one gets settled in it seems it's time to leave.  I need to come back sometime soon and spend a week with some samples of my photography and more business cards and see if I can get my work into some of the galleries in Park City and Salt Lake. 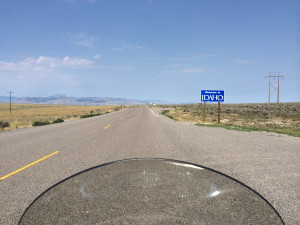 Mom was a bit teary-eyed as I packed up Angus and got ready to leave, which made me get the same way.  She's sad to see me go, and worries when I'm on the bike.   I had looked over the Harley Road Atlas, but like my trip down ten days ago, there doesn't seem to be any route I haven't taken, so I decided to just retrace my route down to Salt Lake.  It was the easiest thing to do and I wouldn't need to write out directions, and I had really enjoyed the route down.  It was a glorious morning, with clear blue skies and the temperature was perfect for just a t-shirt as I pulled out of Mom's and headed for I-80 a little after 9am.

I'd gotten past the rush hour and so traffic was light, despite or maybe because it was the start of a holiday weekend.  I headed North out of Salt Lake and up through Davis County, past Ogden and into Brigham City where I bailed off the freeway and headed West around the top of the Great Salt Lake.  I probably passed maybe two cars on the run up to Snowville.  West from Snowville it gets even more desolate as the road turns North again and crosses into Idaho.  In Burley I picked up old US-30 and rode it all the way to the end at Bliss where one is forced to get on I-84 with it's 80mph trucks.

At this point though I'm only 80 miles from Boise, my stop for the night.  After I got onto the freeway I had one of my internal arguments with myself trying to decide whether or not to stick it out on the freeway all the way to Boise, or to jump off just past Glenn's Ferry and take that same little back road I took down from Boise. Normally this would be a no-brainer -- take the back road.  ButI had intended to stay the night in Caldwell, which would give me a nice continuation on the highway that runs along the West side of the Snake River, and put me about 25 miles closer to Seattle.  However, as I was eating lunch in Twin Falls and booking my hotel on the Holiday Inn app on my phone, the hotel in Caldwell suddenly disappeared!  The little red dot vanished!  Right before my eyes the hotel fell off their app.  Seriously.   I refreshed the app and it was still gone.  I called the Holiday Inn reservation number and the nice girl in the call-center in India said that there was no hotel in Caldwell.  I said that can't be -- I was just booking it, I saw it riding down last week, and I stayed there last year!   Did it fill up?  She, like all good Indian Call Center People, stuck to her script and said "I'm sorry Mister Gary, but we have no hotel in Caldwell, Idaho."   I hung up and called information and asked and  they had no listing for a Holiday Inn Express in Caldwell either!   I don't know what is going on! I know I'm not insane!   Needless to say I had to book something else, and the only other Holiday Inn property I could get was in downtown Boise.   To get there I would have to backtrack on the freeway from Caldwell for about 25 miles and then head back again the next day.  This made no sense. 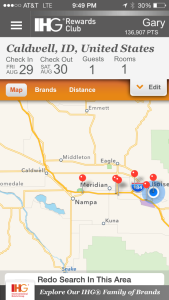 So there I sat, rushing along at 80 mph on the freeway debating in my head, "Do I stick it out and get to the hotel, and save 50 miles? Or do I take the more relaxing way but add an hour getting to Boise, and another 50 miles of driving?"   Truth be told I was tired and the freeway wasn't all that bad as traffic was light. And the ride was at this point almost getting to be a chore since I'd been on the bike for 8 hours and was headed home.  And so I argued with myself -- told myself how much I liked the back roads, and it was more relaxing and all -- "but you are tired and it's hot and you'd have to backtrack 25 miles" I thought.  This went on for some time in my head, but my heart won out and I exited for the back road along the Snake.

Then low and behold, as I exited off and rolled into the town of Hammet where I had to make a turn onto ID-78, I noticed a small sign that said "Mtn. Home 20 Miles" on the road I was on.   I thought to myself, well that gets me closer to Boise and on an old road, and maybe would cut down on the freeway driving to about 20 miles and I'd get into Boise and not backtrack.   So I said "what the hell" and kept going West on this un-numbered road. 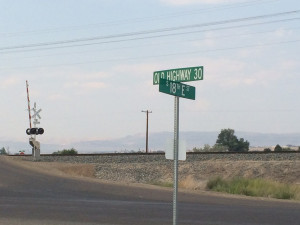 Well as luck would have it, this turned out to be "Old US-30" which was the main road before I-84!  Well who'd a thunk?   I didn't notice it until I passed one of the cross street signs and saw it on the cross buck, as it wasn't signed at all along the route.  And it followed the Union Pacific mainline too which means I might get to watch a train -- always a good thing.   So I was quite happy with myself as I headed up the road into the high desert of Idaho.  I was hoping there would be some ghosts along this stretch of old highway, but alas there wasn't anything worthy of stopping to shoot.  What old relics were left were converted to other uses and not abandoned.

Unfortunately I didn't see a train the entire way, as I rolled through Mountain Home and headed the remaining 20 miles into Boise.  Then, as is usual for the late afternoon in the West, on the horizon came a thunderstorm.  But as luck would have it, he stayed off to my left and I didn't even get wet, although I got to breathe in the smell of the rain wafting in on the wind as I enjoyed the last few miles into Boise. 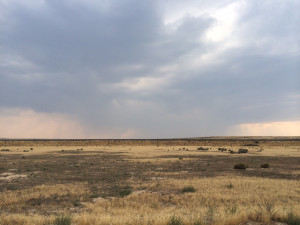 And I know I'm not crazy!   I'm going to see what happened to that Holiday Inn Express in Caldwell when I drive through on Saturday.  This is just too weird.
Subscribe