The Long And Lonely Road

It's no secret that I despise riding on freeways, and I relish finding a windy quiet back road, even if it takes much longer to get somewhere.  Back roads can also be lonely affairs -- with sparse traffic and small towns and ghosts of the road, and that makes me love them even more.  Freeways can go through the middle of nowhere as well, but its not the same.  In fact it becomes a boring ordeal on the freeway, when the same distance covered on a back road can be an enjoyable experience.  And for me, a big part of that enjoyment is the solitude.  Just me and Angus -- the road and the sky. 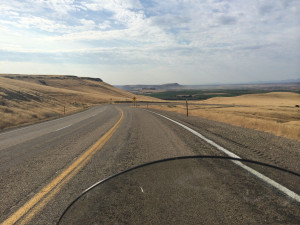 I had always assumed -- wrongly as it turns out -- that the only way South out of Boise was down I-84 through Mountain Home until one could pick up a remnant of old US-30 in Bliss, Idaho.  This is a particularly abysmal stretch of Interstate through the high desert sagebrush -- straight as an arrow, with nothing to watch but a cell tower in the distance and the trucks rushing by with the 80 mph speed limit.   But in scrutinizing the Harley Atlas, I found a different route that runs down the other side of the Snake River, West of Boise.   So I left my hotel in the suburb city of Meridain and rather than head East, I turned back West for ten miles before heading South on ID-45 and then East on ID-78, which runs along the Snake River and winds and meanders through lovely farm lands and small towns until it runs into I-84 at Glenn's Ferry.

At that point I had to jump onto the freeway for about 20 miles, rushing along with the trucks at 80mph, until I could exit off, at the appropriately named town of "Bliss" since it was heavenly being back on a winding two lane again -- this time the old US-30.  Before I-84 this was the main way across this part of the country, more or less built along the old Oregon Trail.  The old road winds along the Snake River and through towns with hot-spring resorts and small farms, and has little or no traffic.  Just me, the solitary biker riding along, passing farmers who wave from tractors or from irrigation gates and occasionally from horseback. Or watching the combines harvest the summer wheat, or the crop dusters diving and turning like Magpies in flight.  So few people live out here in this vast empty swath of the Intermountain West that one tends to wave at everyone for the sake of acknowledging that one isn't alone I suppose.  Where US-30 runs into I-84 again I turned South on ID-77 and ID-81 down through the near ghost towns of Albion and Malta before crossing into Utah and "home".
As a writer I pride myself on being able to describe something or tell a story -- but the lonely solitude along the forgotten back roads through a desolate landscape is something I'm unable to do.  Watching thunderstorms from miles away as they drift across valley's that appear empty except for the green of alfalfa, or the gold of wheat, or the blue-green of sagebrush, and here and there a farm building or home, and occasionally the ghost of one, as the solitary rider glides along at 60mph with the road all to himself. 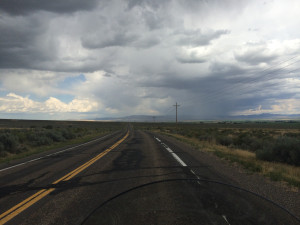 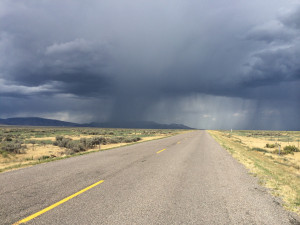 I was hoping to time it so that I'd ride right through these twin showers like a football kicked at a field goal, but alas it wasn't to be.  The shower was a nice refreshing cool, and while I got a bit wet, the sun dried me out in less than a few miles -- it didn't even get me wet enough to do a biker laundry.  The smell after a rain over the wheat fields and alfalfa and sage is another thing that it is impossible to describe all the while being as intoxicating as a fine Scotch Whisky.

People have lived here -- or tried to live here -- since the days of the early westward migrating pioneers, and their ghosts still haunt the landscape.  Its another reason I love these solitary lonely roads.  I can't imagine what it was like to live here -- 30-40-50 miles from the nearest "town", and a dozen miles from any neighbor.   Its a tough land too -- and now days it takes giant machines to till and harvest thousands of acres to turn a profit.  The lonely rancher or farmer just can't make it in this empty corner of the West. 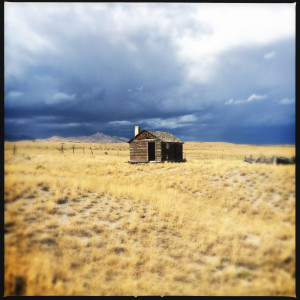 In Snowville, Utah I again rejoin I-84, but I first take a moment and call my Mother who's been worrying all day as she does whenever I'm on the road on the bike.  It's 4pm and I wanted to check in and tell her I'm still about two and a half hours out and ask about dinner.  She says she's going to make pork chops with baked potatos and fresh tomatoes from her garden, and that she'll wait to start cooking so it will be ready when I get home.  And as she's prone to do when she knows I'm coming and on the bike, bakes me cookies.

From Snowville it's another 20 miles on I-84 before I can hop off and take a back road through the sagebrush and along the Northern edge of the Great Salt Lake marshes, past the giant factory where they made the Space Shuttle and Apollo Rocket engines and fuel, and along the original grade of the first Transcontinental Railroad and the Golden Spike historic monument.  But all too soon this road runs into a freeway as well and I reluctantly turn up onto I-15 for the remaining 40 miles to home.

Soon I'm passing all the familiar landmarks;  Brigham City, Fruitvale, Smith and Edwards, the Ogden grain elevators, Hill Field, Lagoon, the Oil Refineries, the radio towers for stations I used to work for...  Then the freeway bends and there's the Union Pacific Yards, the Capitol, and downtown, and in the distance ringing the valley, MY mountains.   I turn East on I-80 and head up to the East Bench and look down over the valley, now filled to the brim with more than a million people.  I exit off and turn down hill towards Mom's place and pull into the driveway.   It's been a long lonely day -- 10 hours on the bike, and 430 miles.  But I'm home. And there's Mom and Ron waiting on the driveway.   I pull in, turn off Angus, and drop the kick stand.   Mom says "That took you a while --  you are the only person who can take the five hour drive from Boise and turn it into a 10 hour one -- next time take the Hummer please, so I don't worry."  I just smile.  It's good to be home, and I hear John Denver in my head "hey its good to be back home again, sometimes this old farm feels like a long lost friend..."  And as much as I love riding solitary on a long and lonesome highway, its also great to be back with the family for a time, and eating pork chops, baked potatos, sliced tomato, and Mom's chocolate chip cookies.
Subscribe