It was a near perfect day for a nice ride.  There's not much more I can say about it.   I left Pendleton a bit later than I planned but it was OK, I'm not really on a schedule.  Although this would come into play later as I had plans to meet my cousin for dinner in Boise and forgot that Boise is on Mountain Time and thus an hour earlier.  But it all worked out.  It was just about 70 degrees when I pulled out of Pendleton, with  "Bop" by Dan Seals on my i-Pod.  Nothing like a good upbeat fun song to get you rolling down the highway.  With the i-Pod on "shuffle" this sometimes results in less than optimum songs and one never knows what will come up, but today it was a good start. 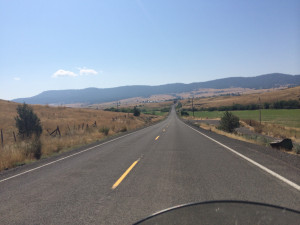 I headed south down US-395, towards the town of John Day in Central Oregon.   This is a very lightly traveled highway and this Monday was no different.  The entire 120 miles to John Day, I played hop-scotch with the same empty logging truck several times, and really had no other traffic headed either direction.  I'd stop to take pictures and he'd pass me, and then I'd pass him and we'd do it over and over again.   This is the third or fourth time I've done this route -- it's got to be one of the prettiest and nicest roads in Central Oregon, although significantly longer and with stopping to take pictures it took nearly 4 hours to go the 120 miles to John Day.  But then again I'm not on a schedule.  The first time I took it was in the pouring rain in 2007, and even then I thought it was pretty -- although I was cursing the entire way.

It's a lonely road though -- with nary a town and no gas station for 120 miles.  Just lots of ghosts, which of course I love and have to stop and take pictures of.  So this trip has turned out to be somewhat of a photo shoot as well.  There's a number of small near ghost towns along the highway as it dips and weaves through the Blue Mountains of Oregon.   Many of them probably as lonely and desolate as they were when the original settlers came this way along the old Oregon Trail, out here in the vast emptiness of the American West. 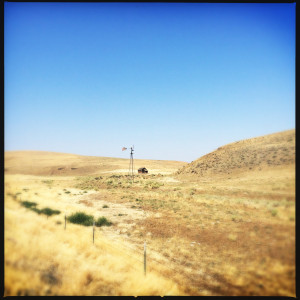 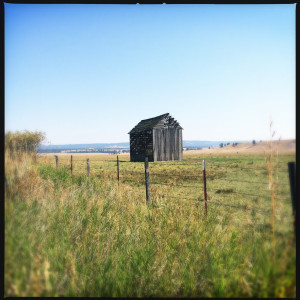 In the small town of Fox, Oregon I stopped to photograph this wonderful old church as well as a couple of abandoned farm buildings.  I pulled Angus to the shoulder and hopped off and a young man came ambling down the highway, stopping to remove the temporary road markers that had been laid down some time back when they had paved the road and before they striped it.  Much of this road had been recently paved and striped and was a joy to ride -- like skating on fresh ice after a zamboni goes over it.  We chatted a bit about the weather and his job -- all while standing in the middle of US-395, and the entire time not a single car came by.  He was walking back downhill to his car that he'd parked and would then do the same thing several more times down the highway.  By this time it had warmed up to about 90 and he was wishing it was still cool.  As usual, he asked where I was headed and we chatted a bit about his wanting to ride and hoping one day to do so.   Hopefully I can inspire his dream a bit more. 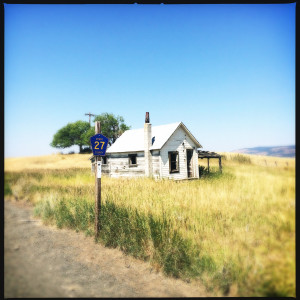 And although the temperature was in the low 90s, moving along on the bike it felt great, and it would get cooler as I'd climb higher -- this stretch of highway has some five or six summits that one goes over as you head South through the Blue Mountains.  Up and down and across long high mountain valleys plus the lack of traffic is really remarkable and it makes for very nice riding, and time to contemplate and just enjoy the music from the i-Pod as well as the music and rhythm of the bike and the road.   The road is very smooth -- freshly paved and worked and the light traffic means no damage.   But occasionally they do have to maintain it, and I did run into a couple of long construction zones. 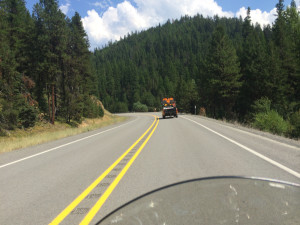 Out here in the West these long construction zones require a flagman and a pilot car, and when you ride up on one you wait for the pilot car to come fetch you and lead you back -- sometimes for miles.   This was no exception and just south of John Day where I turned West on US-20 I ran into one.  I was the only car on the road and got to the flagman and asked how long.  He said "just missed him, he'll be back in about 20 minutes".  I shut Angus off and got off to stretch my legs and have a drink while I chatted with him.  Why they couldn't have found a shady spot I don't know but there wasn't an ounce of shade within any walking distance, so we stood there in the now 95 degree heat and chatted a bit -- asking where I was headed: "Boise" " 'bout a 120 miles" "Yep"...   The entire time there was not a single other car.   Finally the pilot car arrived with three cars following, and he did a U turn and I waved at my flagman friend and followed the pilot car as his digital sign flashed "PILOT CAR" "FOLLOW ME" over and over and over for about 10 miles, while passing lots of road machines grading the shoulders and stuff.  At least with this system they can get a lot more work done and very little traffic to bother them.

I stopped in Vale, OR where we changed over into Mountain Time to call my cousin Julia to tell her I'd be an hour later than I thought since I forgot about the time change, and I'd call her when I got to Boise.  At Nyssa, Oregon the highway crossed over the Snake River and I was in Idaho, passing long fields of onions.  Apparently Idaho is also known for onions, and the slight hint of onion on the air was nice.  Add some frying potatos and onions and the fact that I'd not had lunch and I was feeling hungry, as I chased my shadow East into Idaho, in a desolate landscape with no signs of life except me in an almost Mad Max post apocalyptic universe. 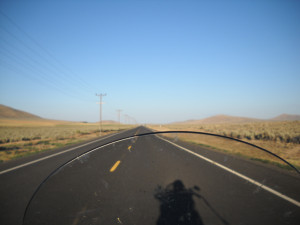 Civilization started to creep back into the field of vision as I got closer to the cities surrounding Boise, and as I roared through Parma, Idaho I happened on this relic.  The Motor Vu Drive In Theater.   And apparently its still in business, showing some 2014 releases and has not devolved into a site for a swap meet or been buldozed for houses.   Alas it had only a radio sound system for sound.  If it had the old speakerboxes I'd be tempted to ride over on Angus and sit back against my T-Bag and take in a show on this warm summer evening. 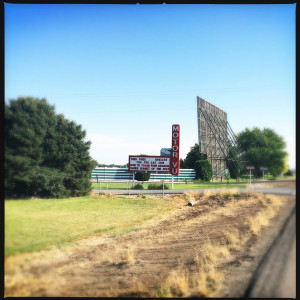 However, I'm exhausted from riding in the heat and a lovely dinner with my cousin and her daughter, so I'll pass on the nostalgic Motor Vu tonite and hit the hay.  Besides, it's an hour later than I thought it was anyway.
Subscribe