Been Down This Road Before

Two things prompted this trip.  1) I haven't been on a good long motorcycle trip other than the three day ride coming back from my winter hiatus in Palm Springs this past May and 2) My Mother's birthday and the fact that the family and friends in Salt Lake City have been begging me to come home this summer for a visit.   So I figured, why not combine both.   I can take a nice long ride down there and back, and spend a week with them too.

So Saturday day night I loaded up Angus to set out early on Sunday morning.  I had originally thought to leave Monday and take a day to get to Boise and see family there, and then another day to Salt Lake.  But that means a long very hard ride in one day.  And since I have scads of free time these days being semi-retired and all, I figured I'd take two days to get to Boise and leave on Sunday and have a much more relaxed ride.   Unfortunately, having lived in Seattle for 25 years and taken numerous trips to and from Salt Lake, there just isn't a road or a route between those two points I haven't taken.   In fact there's hardly a road leading anywhere out of Washington I haven't taken.   My biker buddy Bob Kramer once remarked upon seeing the large map in my garage with my highlighted roads I've taken, that it appears I've done every road in and out of Washington and the only thing left is a "dry river bed or two".  He's not far off. However, while the vast majority of the route this trip is one that is very familiar, I did manage to cobble together some stretches of back roads between a few towns that I have not taken, so this trip will be a bit of a new wander.   But leaving Seattle was via Interstate 90, at least as far as Cle Elum.   It was only 66 degrees and I debated with myself about putting on my jacket and was glad I did going up and over the pass.  The 90 is a pretty drive as far as a freeway goes, and Sunday morning traffic was sparse.  However its not a fun nice ride.  The road is in terrible shape, made even worse by the widening construction project on the East side of the pass.   A few years from now assuming they get it finished, it might be a nice road, but it's a white knuckle battle on the bike for me, and I was glad it was only 80 miles to Cle Elum and my first pit stop.

I needed gas, having left Seattle with less than a full tank, but I was also hoping that Owen's Meats would be open on Sunday.   I was very happy to see that it was and parked along the side.  Owen's is a traditional old fashioned butcher shop that a biker friend introduced me to a few years ago.  It's been there a zillion years, has long counters in a narrow building with sawdust on the floor, and the meat is so good that I know people who drive the 80 miles from Seattle with coolers to take home cuts.   What makes Owen's famous though is its sausage and jerky and peperoni.  I needed some road snacks and their peperoni sticks do just the trick and they don't need to be refrigerated. 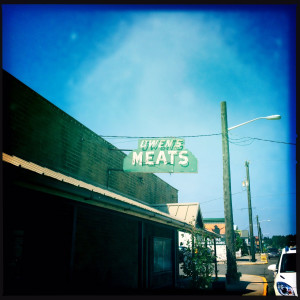 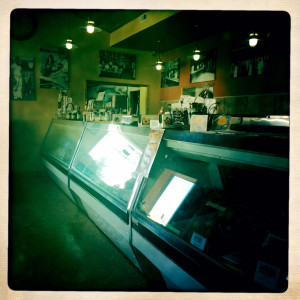 The boys manning the counter wanted to talk bikes, so I let them go outside and lust over Angus and we talked about road trips and such, and they stocked me up with enough peperoni to get me to Salt Lake and back.  And as the sign says "Owen's Meats -- You Can't Beat Our Meat".

From Cle Elum the rest of the way to Umatilla, Oregon I took familiar back roads -- gliding along the Yakima River and through the Yakima Canyon, and down into the "Palm Springs of Washington" -- Yakima.  My friend Danny from Palm Springs was up here a few weeks ago and we went to Spokane via Yakima and he about laughed himself sick at the sign proclaiming that -- and said "Hardly! -- its more like El Centro".  Anyone who's been in El Centro will instantly know why.

I stopped in Yakima for lunch at a Sonic Drive In -- my favorite chain place.  I wish to hell we had one in Seattle.  It's nice to sit outside on their picnic tables and enjoy a burger and tater tots and a lime aid.  And at least this time they actually brought me the diet lime aid I ordered.  Nine times out of ten they bring me a cherry lime aid when I order a diet lime aid.  I don't know why.  I enunciate quite well (I was in radio for years remember).  I'm not sure if its the crappy speakers you order through or maybe diet sounds like cherry in espanol, I'm not sure. (Another reason Yakima is akin to El Centro, but I digress.)

Southeast of Yakima the road winds through endless apple orchards until Prosser when it turns due south and climbs up to the plateau above the Columbia River and gradually drops down and you cross the mighty Columbia and into Oregon where we aren't allowed to pump our own gas.  Well bikers are because the attendants seem to be afraid of us, although they have to handle the credit card, pick up the hose, hand you the hose, and let you fill up the tank while they hover near by.   I was hoping to fill up on the Washington side but there were no gas stations and so I had no choice.

From Umatilla I headed east on US 730 for a few miles before heading south on Oregon 37.  This little fifty mile stretch was all new and a back-way into Pendleton, home of the famous rodeo and blanket.  I don't think I passed a single car the entire fifty miles, which wound along the Columbia for a ways before ducking into a small canyon with some lonely farm houses, a few grain elevators, and a nifty abandoned school house I had to stop and shoot a few pictures of for possible use in the gallery shows. 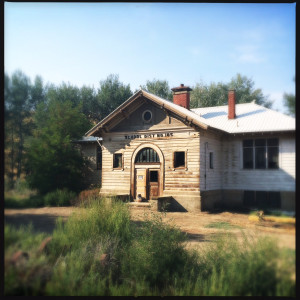 Sunday's are generally a very quiet time on the road, and little traveled ones are even more quiet.  Its rare to even see anyone sitting on a porch or working in the yard.  It's just me and the road and Angus rolling down the highway.

I rolled into Pendleton a little after 5pm and checked into my hotel.   It was good to get off the bike and wash of the grime.  It wasn't unbearably hot, but I was sweaty and dirty and a cold shower felt nice.   At her suggestion I rode into downtown Pendleton for dinner at "The Prodigal Son" brew pub, and had an outstanding Mac and Cheese dinner with a Peach Hard Cider and a Whiskey Hazlenut tort for desert.  Despite all the alcohol in the names, I was fine to ride back to the hotel at sunset, and it cooled down and the evening air was nice.  I even got to watch a long Union Pacific train rumble through town, which put a nice cap on the evening.  Life is good.
Subscribe