Good Lord where is this year going?  Already half way through June!  I'm headed back to Palm Springs later this week for my first big gallery show there at the Brian Marki Gallery, then off to NYC for a week, and back home by the end of the month.  Below is my June column from QT...

So we are almost half way through the year already, and I realize looking back that four of the last six months I’ve mentioned the efforts to raise vehicle license fees to get revenue for mass transit and for roads. I’m getting a little tired of it. I had hoped that once after the April special election to raise sales tax and vehicle tab fees had failed overwhelmingly that I wouldn’t be doing it. Alas I was wrong. The voters in King County defeated the measure, but the voters within the Seattle City limits did not – they passed it. So while the proposal was defeated overall, the Mayor and City Council of Seattle have decided to rerun the election this fall, only this time the $60 increase in license tabs will go 100% for transit, and only voters in Seattle will vote! Not a damn dime for road repair and maintenance! But the election won’t be until fall, so I have more time to gripe about it and would rather focus on what we all enjoy about summers in the Northwest – riding.

Unlike many of you, I got to ride all winter this year. I spent all but a few weeks away from Seattle for the first time in 25 years. As I write this I’m in Palm Springs, California where I have spent the biggest chunk of the winter working on a couple of book projects. But as the weather here starts heating up and we are flirting with temperatures around 110 here in the desert, its time to point the bike back home to Seattle, and I should be home by the first of June. I had my ride shipped down in early January right after I got here, and with rare exceptions has been my only form of transportation while living here. I have to admit it’s been an interesting experiment for me these last few months – having ONLY a motorcycle for transportation. I know there are a number of hearty souls who commute year-round and have only a motorcycle, but this is a first for me.

In the summer, especially in Seattle, I love taking my bike virtually everywhere. Note I said “virtually”. Not EVERYWHERE. There is a lot you take for granted when you have a choice of vehicles. Going to the grocery store for example. I ride a Dyna with saddle bags so this is a bit of a chore. Hell it would be a chore on a bagged out Ultra with a trunk! I became rather adept at bungee cording boxes to my passenger seat, and my leather saddle bags can hold a fair amount -- I could generally get a couple of days worth of food in them when I bought smaller containers. Plus we get real plastic bags here too – I’ve forgotten what they are like! Ice cream, especially in Palm Springs didn’t fare to well in traffic in saddle bags I found out. And tortilla chips were a bit broken and smaller by the time I got home. I found myself buying smaller and making more frequent trips. One does not make a Costco run on a bike! 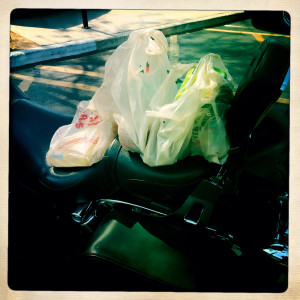 Getting takeout from restaurants and drive thru window is always a challenge, and you can’t really eat and drive like in a car. Dropping off dry cleaning is easy – picking up finished cleaning?  Not so.  I missed my coffee on my 18 mile trip each morning to work on the book. For me it also meant hitching rides from friends to events and movies and such. And rather than wear gym clothes to the gym and go home to change, I had to ride to the gym and change there.

Most folks who know me know that I don’t always (OK rarely) adhere to the “All the gear all the time” rule. I love riding in short sleeves and sleeveless – especially here in the desert. But one thing I do is always wear long pants and a helmet. Thus I have a wonderful biker tan on my arms and face, but the rest of my body, and especially my legs, are as white as the frozen corpse of George Mallory high on Mt. Everest. I swear that my friends in Palm Springs put on sunglasses when I show up for dinner wearing shorts, (after they pick me up.) I suppose I’ll fit right in back home in Seattle.

But looking back it has been a wonderful winter relying just on my motorcycle here in the desert. I got to ride every day. It only rained two days the entire time I was here. And I learned to adapt to the situation of living with just a motorcycle. So I really have to admire those folks who live 24/7 and 365 days a year with just a motorcycle. It takes a special kind of courage and grit to do that, especially in the soggy Northwest. I tip my helmet to you.

And I have a new appreciation as well for folks who have to rely on transit for everything from getting to the doctor to picking up groceries or dinner. Damn it, that brings us back to the whole Metro transit funding debacle that I didn’t want to talk about. It’s clear we have to fund transit – but how? I don’t think a flat $60 more per license plate applied ONLY to people in Seattle is the way to do it, especially with no road funding included. So what do we do? I’ll think about that on my ride home to Seattle and we’ll talk about it more this summer. That and Governor Inslee’s plan to add $1.17 in taxes to a gallon of gas. Yep. Lots to think about.