Two-thirds Of The Way Home

Yesterday would have been a glorious ride except for one thing.  It was cold.  Very cold.  Either that or I've become so acclimated to the desert that 50 degrees was cold.  Of course I knew it would be cooler up North, and I had brought along all the leather gear and a heated jacket liner just in case for this ride home, and had been tripping over them for five months in Palm Springs.   In the end I was darn glad I had them though.

It was bright and clear in Carson City when I woke up, although "cool" -- in the mid 60s.  I dressed in a long-sleeve t-shirt and headed up North through town and past the Nevada State Capitol.   Once a lobbyist always a lobbyist I guess -- as I had a strong urge to stop and go through the building, but I didn't.   I continued on US-395 which is also I-580 here so was Interstate up to Reno, where I stopped at the Harley-Davidson dealer for a t-shirt and to put on my heavy leather jacket.   It continued to get cooler as I got North of Reno, and lined up at the California "Fruit Inspection Station" at the border.  Resisting the chance to make politically incorrect jokes, I was waved through.  This process does baffle me as I could have a ton of "illegal" fruit in my saddle bag and could possibly contaminate the entire agricultural industry in California in some sort of fruity terrorist attack.  But I digress.

California is indeed a diverse state.   Far from the stereotypical SoCal/Orange County freeway congestion and endless tract houses, this section of the Golden State looks like most of the rest of the West.   Lots of sagebrush, endless vistas, range land and ranches, and small towns barely clinging to life.   About halfway between the state line and Susanville I came across this "Shoe Tree" in the middle of nowhere.  Alas I had nothing to contribute to it. 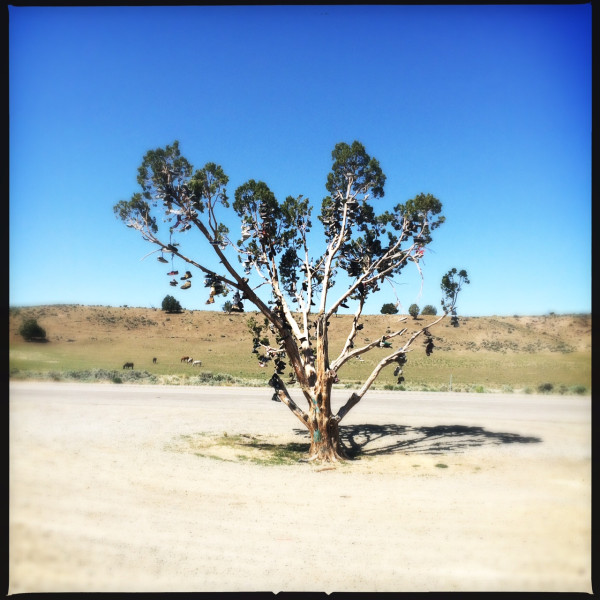 Further north past Susanville it really thinned out and there was not much in the way of towns or signs of life, and you could easily forget you were in California at all.  Certainly not by the temperature which had dropped to the low 50s and high 40s, and caused me to get out the heated jacket liner.   With the windchill it was very cold and I was glad to have it, even tough the sun was bright in the sky.  Parallel to US-395 was a wonderful abandoned railway line -- the old Southern Pacific Modoc line that has been abandoned since 2006 and torn up.  But there were still signs, and indications of its existence -- just missing tracks all along the way.   In some places there were still tracks with sage brush growing between the rails -- reminding me of the old Utah Railway tracks my friend Dave and I explored a year ago this time. 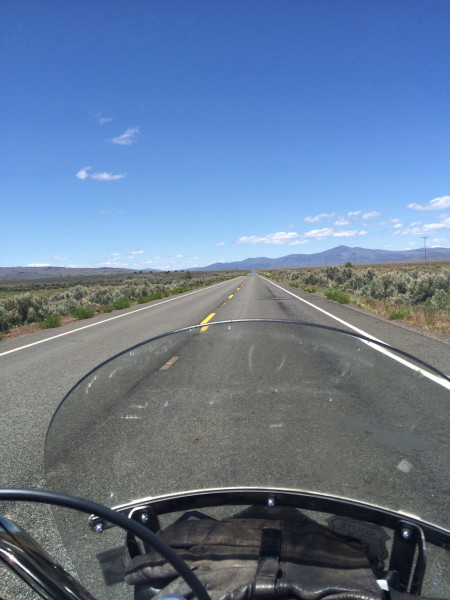 In Alturas I had the option of heading to Klamath Falls or up a long desolate stretch of highway that would have taxed my fuel tank capacity, so I opted to go through Klamath Falls and head North to Bend for the night.   The temperatures got cooler as the sun set and by the time I made it to Bend I was chilled through and shivering.  I was grateful to get off the bike and into the hotel's hot tub again.   I've ridden the stretch of US-95 from Klamath to Bend several times -- and it actually has a 90 mile tangent without a curve.  Normally it's pretty, but with the wind and cold temps and the straight flat running, it was one of those rare "endurance" tests on the bike that make even someone with as many miles as I have under my belt question what the hell he's doing out here.

So another 490 mile day is done.   If the weather holds I should be back home in Seattle by late Thursday.  But if its cold and wet, I'll be tempted to turn back south to Palm Springs for sure.
Subscribe