It's kinda hard to believe that I've spent almost five months here in Palm Springs, and it's already May.   I'll be here through Memorial Day before heading home to Seattle.   Yes, Seattle is still "home" for now -- but I'm giving serious thought to (gulp, I can't believe I'm saying this) becoming a "Snowbird"!   It would be nice to do a five months in the desert stretch, and a seven months in the Northwest stretch.   I've been staying the past month in a wonderful little "Mid Century Modern" condo in South Palm Springs -- built in the 1950s and renovated with that 1950s look -- complete with turquoise cabinets,"Fiestaware" plates, pink flamingo TV trays,  and retro ceiling fans.  All it needs June Cleaver to vacuum it wearing pearls and heels.  I kinda like it... 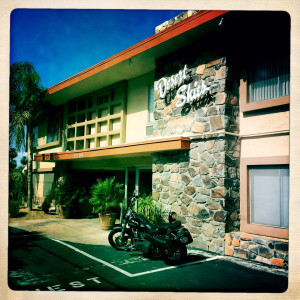 But since it's May and that means Mother's day.  I've never really written a Mother's day column -- my mother really dislikes the fact that I like to ride.  But I decided to give it a shot.   My publisher said it was one of the best things I've written and made him cry (although I'm not supposed to tell anyone that as he said he'd kill me if I ever did). 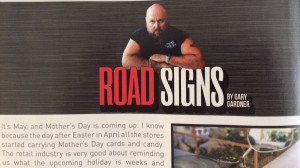 It’s May, and Mother’s Day is coming up. I know because the day after Easter in April all the stores started carrying Mother’s Day cards and candy. The retail industry is very good about reminding us what the upcoming holiday is weeks and sometimes months in advance. I love my Mom and I always send her flowers and a card and give her a call even though she hates me. No, she really doesn’t hate me -- hate is probably too strong of a word. Lets just say she highly dislikes several things about me or that I really enjoy.

She is very politically conservative – I am not. She is deeply religious – I am not. She really disliked what I did for a living and would introduce me at parties and such by saying, “this is my son Gary, he’s a lobbyist, he’s part of the problem.” I love Scotch and a fine cigar. She really doesn’t like that at all. And she truly hates the fact that I love to ride motorcycles.

She has good reason to hate the motorcycle riding. Her brother was almost killed and became severely handicapped after he was in a terrible motorcycle accident about the time I was born.  A car turned left in front of him and he plowed into it at high speed. His promising career as an engineer was cut short due to brain damage that he suffers from to this day. My Mom has never gotten over that. Growing up we were constantly reminded of what happened to our uncle, and warned about it.

To this day, I know she cringes and sends up a prayer when I’m out on the bike. It still makes her very nervous. I was visiting her in Salt Lake City some time back and had to take the bike in to the Harley dealer for service and needed her to follow me down. She did, but I could see the panic in her eyes in my rear-view mirror every time another car would come within inches of me and my ride.

I also know deep in my heart, though I can’t prove it, my Mom has the ability to conjure up a storm when she knows I’m going riding just to keep me from going out. So I stopped telling her in advance. She has powers that way. Maybe that’s why Seattle is so rainy. Her powers even reach across the ocean.  I purposely didn’t tell her I was renting a motorcycle on a trip to Scotland, yet somehow every day I went to ride a storm would appear out of nowhere. Mom knows. 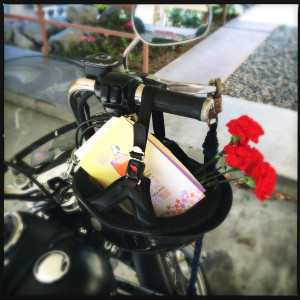 I guess I’m lucky that she allowed my Father to purchase that old Yamaha that I learned to ride on back when I was twelve or so – exploring the back roads of the National Forests of Utah and Wyoming. It’s what gave me that irresistible urge to hit the road, fists in the wind, and see what’s around the bend ahead. For that I’m grateful.  Its one of the many things I love about my Mom – that she put her deep seated fears on hold to allow me to sit behind the handlebars and head off. I imagine it must have been rather hard for her to see me ride down some dirt road, no helmet, too young to drive a car, and wonder if and when I’d get back and if I’d be OK. But that’s what Mom’s do. It’s what makes them special.

So she grudgingly tolerates my love for riding. I think she understands it, but I know she doesn’t like it. When I buy a new bike, or get lost in thought wishing I was on the road, she’ll give me one of those patented “Mom” kind of looks and say “Oh Gary”, shake her head and walk away.

And I know it’s not easy for her having a son who’s an agnostic, liberal-ish, Scotch drinking, cigar smoking biker who was also a lobbyist. But I know she loves me, and I suspect her prayers are something that’s kept me safe over the years. For Mother’s day I could offer to NOT go riding on that day as a present to her. But she knows that I’m at my happiest when I’m out on the road in the sunshine, and like all Moms around the world do, all she wants is for her kids to be happy. If I did make that offer that she’d tell me to go out and ride – just be careful and make sure I had my helmet on. She’d cringe, probably say a silent prayer, and then go bake me some chocolate chip cookies. That’s why she’s a Mom. And that’s what Moms do.   Happy Mother’s day Mom – to my Mom, and to all the Mothers who love to ride, and more important, love those of us who do.