The initial goal for this trip to Palm Springs was to spend as much time as I could interviewing Madelon and Mildred so that I could tell the world the story of their wonderful and amazing lives.   I wanted to talk with them about their early lives growing up, and how they met, and their lives together, culminating with their marriage last fall once marriage equality was affirmed.   I never expected to be writing the final chapter of the book first however.   But that is what I've been doing.

Last night Mildred passed away.  What started as a cough just before I arrived in January developed into pneumonia, then she slipped in the bathroom and hit her head and was rushed to the hospital.  She recovered some there and went to a transitional nursing facility for a week, and then to the skilled nursing facility at their home.   The day after she got there she suffered another stroke and was rushed back to the hospital where an MRI confirmed it and that there was nothing that could be done.   She never really recovered from that, and has been slowly fading and last night her light went out.

We knew this day was coming -- in fact Madelon had asked me last week to write her obituary.   Mildred had strict "Do Not Resuscitate" orders, and we knew she wouldn't want to suffer.  She was one of the strongest women I've ever known, and she was always a fighter. It was a long slow week and a half, and tough to watch and endure.  I don't know how Madelon did it.  Writing her obituary was difficult to do, and not what I had envisioned at all for this trip.   But it had to be done.  We found a nice picture that was taken when she and Madelon were married last year to use, and she insisted that I be listed as their "nephew", to which I'm deeply honored and moved.

I was fortunate to have had a few good conversations with her this trip before the stroke took her ability to communicate.  We started with her early history in Oregon, and she related being teased for being a "tom-boy", and how she didn't like her Mother and was always running away.  When I asked her about her friends and what it was like, she hesitated and said "you are taking me down a road I don't want to go."  So I dropped it.  Even Madelon knows little of her early history.  I'm reminded of the elderly "Rose" in the movie Titanic, who says that a "women's secrets run deep."   I suspect we will never know some of hers now.

She really disliked staying at the rehab center after the hospital, so Madelon and I arranged to have her moved to the nursing facility at the Carlotta.  That day was the last conversation I had with her.  I rode up on my Harley and she took great delight in that and telling the orderlies that I wasn't as mean as I looked.  My bike was parked next to the entry and she pointed it out.   She was so ready to leave that facility that if Madelon and I hadn't arranged the move she would likely have rolled herself right down Frank Sinatra Drive back home.   She was smiling and full of fight and ready to go, and she always got her way.  I really thought she would recover, but it was the last time we had a chance to really speak.   The next day she had another stroke and was taken back to the hospital and then sent back to the Carlotta for end of life care.   She never really spoke more than a few words after that.

So now my job becomes a bit harder, as Madelon and I work alone to tell the story of these two remarkable women, and the wonderful life they have lived.  But their story will be told.   I know it is what she would have wanted. 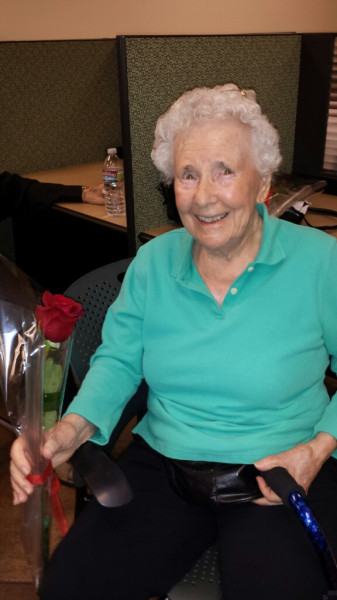 "Mildred Ann Snyder passed away peacefully at her home at The Fountains at The Carlotta in Palm Desert, California on February 26, 2014 at the age of 94. She is survived by her long time partner of 45 years, Madelon George; their self-adopted nephew Gary Gardner of Seattle Washington; as well her nephew Bruce, and niece Lisa.

Mildred was born on November 29,1919 in Sherwood, Oregon, the daughter of John Snyder and Virginia Jones Snyder. She studied at the University of Oregon, and graduated from the University of California at Berkley, where she also attended Graduate School. She studied bio statistics, and epidemiology and ultimately became a renowned epidemiologist. She worked as a consultant for several Pan American health organizations and spent time in Central and South America. She was well known for her ability to teach research techniques. She spent most of her career years in the San Francisco area.

It was in San Francisco where she met Madelon George with whom she began a 45-year relationship. Once the Supreme Court recognized the inequity in treatment of same-sex couples and affirmed marriage equality, something Mildred never thought she’d see in her lifetime, they celebrated their long relationship with an official marriage in Indio, California in 2013.

In the early 1980s when both Mildred and Madelon decided they’d had enough of their careers in health care, they sold their home in San Francisco and left to become the part owner and managing general partner of a mobile home park in Eugene, Oregon. Later they lived for many years on the Oregon Coast, and in Seattle. They enjoyed traveling the country in their RVs; making and meeting countless friends along the way. They have lived full time in the Coachella Valley since 2009.

Mildred’s tough, yet gentle and loving spirit is what her friends and loved ones will most remember and miss. She could always be counted on to fight for what she wanted and for what was right, and to be a calming influence with friends who were upset and needed someone to listen. She loved reading the New York Times every morning, working in her garden, and having a glass of whiskey at night while chatting with her loved ones and friends, all of whom will miss her sharp tongue, keen wit, and amazing intellect.

There will be a celebration of life at a later date.   In lieu of flowers, friends are asked to give a gift of remembrance to Lambda Legal, the organization that led the fight for marriage equality."