Anne Murray had a hit song back in the 1980s when I was a DJ for a huge country radio station in Phoenix -- KNIX -- called "Someone's Always Saying Goodbye".   Seems that's the truth.   Someone's always saying goodbye to someone, or in some cases, something.   I've been doing that a lot these last few months it seems.   Its funny what we get attached to and get somewhat melancholy when we have to let go of it.

Tonight, of all things, it was my former husband Tony's house in Seattle.  I didn't think I was terribly attached to it, especially since he's been in Tampa now for three years.  He bought it when we separated.  It was a rather complicated transaction, involving me buying "my" condo in Olympia that we had originally bought under his name (for tax reasons), from him which gave him the funds to buy his townhouse as part of our separation.   That little townhouse suited him perfectly as a single man, and he made quite a nice home out of it.   And through it all I was welcomed there, and I had a key so I could go in when I needed to -- just like he kept a key to the house we shared when we were together.

When he moved to Tampa for a fantastic career opportunity, the real estate market was in the dumps and so rather than sell it at a big loss, he decided to rent it out.   It fell on me to be his property/rental manager and take care of the property and deal with the renters.   We were fortunate to have great tenants for those three years, but when the last tenant decided to move at the end of their lease, he decided he wanted to sell it.

He engaged a realtor that he had sung with in the Seattle Mens Chorus and I spent some time getting it ready to show -- patching and painting and cleaning.   After a few months it sold at a great price and he closes in a few days.   I had to go over today and drop off my keys in the house, so I took a moment to wander about one last time. 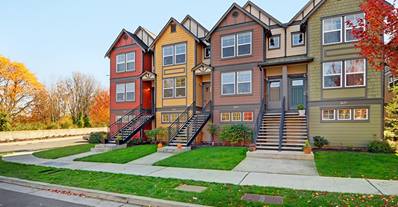 His development is a bunch of San Francisco style townhomes -- Tony's is the yellow one above.   There is nothing quite so sad as looking about an empty home one last time.   It smells clean, but you can still smell the previous owner in a way.   Footsteps echo, and you remember what painting hung where and where the furniture all sat.   You recall the dinner parties and movies, and where our old dog Lucy used to curl up in the sun.

Its not even my house, but yet I got a little melancholy walking through it one last time.  It's funny how you attach your heart to some things.   It was a good little place for him.  I guess I always hoped he'd move back one day.   It's gonna be harder to say goodbye to my little Olympia condo next month when it sells if this pending sale goes through, and heaven help me if I ever have to sell my main house.   I think I'll be a basketcase.

I know folks who have sold and lived in dozens of houses over the years.  Not me.   My friend Garland never lived more than three years in the same house (as an Air Force brat they moved every couple of years).   In the almost 24 years I've lived in Washington I've lived in two -- and this one for 17 of them.   Growing up we lived in two -- but I don't remember the first one at all.   I'm a nester I suppose.   And it's hard to leave a nest sometimes -- even when it isn't one of your own.
Subscribe