I just finished writing my February column and sending it to my publisher, and so it's time to post my January one from the current issue.   I took December off after writing a monthly column for four years straight.   First time I've done that.   Doesn't seem that long.

OK, I just have to ask – “Where the hell did the year go?”   I mean here we are in 2014 already for cryin’ out loud!  It seems like just yesterday it was spring.   It’s dark early, the sun comes up late, and the winter gray and rain have returned to the Pacific Northwest.   The bikes are in the garage attached to battery tenders, waiting for the occasional sunny and dry day to be able to escape for a quick putt somewhere.   It’s depressing and it makes me grumpy – it’s a sad time of year!   We get sad here in the Northwest – many of us suffer from SAD – Seasonal Affected Disorder, and why we all buy those 1000mg Vitamin D tabs from Costco to keep us somewhat happy.   I had a buddy who’s doctor gave him a prescription for ultra high doses of Vitamin D that he had to get from a pharmacy.  He called them his “happy pills.”
I think I’m suffering from SAD though not just because of the weather.   I’m suffering from SAD because of the politics around here.   Between the federal government shutdown and Health Care Act rollout on the national scene, to the Boeing/Union fight here, and the recent Seattle local elections its all getting too much.   This crazy city  elected an avowed Socialist to the city council who’s ultimate platform calls for the nationalization of Amazon (the major economic engine driving things in Seattle these days), and the ownership of Boeing by the workers and converting it to building mass transit vehicles.
At the same time, King County METRO transit is running out of money and the solution King County and Seattle officials have is to institute a $100 per vehicle tax to fund transit.   So, lets see, with three motorcycles and one truck that comes to an additional $400 for yours truly.   Really guys?   A car-tab tax per vehicle?  $400 a year more for me to drive on rotten roads that beat the crap out of my bikes?  And you wonder why Seattle is such an expensive place to live.   And to top it all off, there’s a legislative session coming up later this month, and the major transportation package proposal has an almost .12 cent increase in the gas tax.  Just when gas was starting to inch down to around $3 and change in a few places here.
It all makes me wanna pull the plug on this place sometimes.  Especially as I contemplate all this after floating around a pool in Palm Springs for a week.   I’m only 52, and I’m not quite ready yet to “retire” to the Palm Springs life.  But damn if it isn’t tempting!   I mean, I can ride around all year in the sun, and navigate my way around the Valley on roads like “Bob Hope”, “Dinah Shore”, “Fred Waring”, “Gerald Ford”, and “Gene Autry”.   I could ignore the politics back home except when the tax bill came, and I could explore other more emotionally satisfying options than dealing with elected officials in a dark, wet gloomy state who’s politics are off the chart sometimes.   Hell, I can even go to Wal Mart and park in a space right by the door dedicated to motorcycles or golf carts!   What kind of life would that be?! 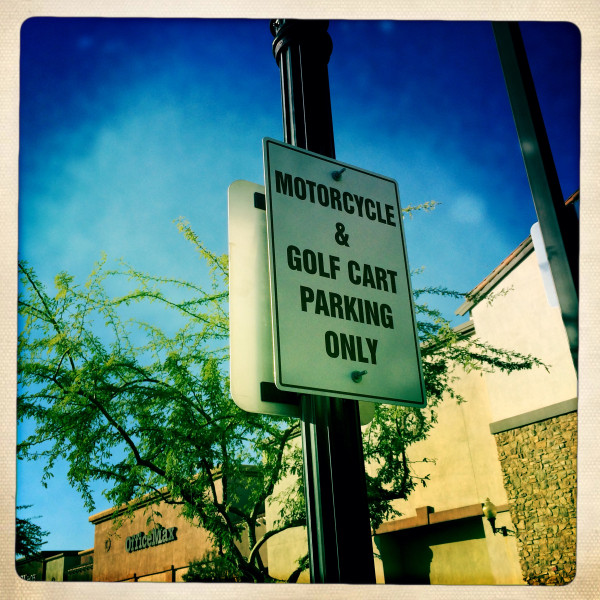 It’s a legitimate question that I ask myself fairly often.   How long do you put up with stuff before you give up and change directions?  How long do you let yourself get nickeled and dimed to death in taxes that don’t make any sense?   As riders shouldn’t we and our riding advocacy groups be upset that we may sucker punched into an additional .12 cents at the pump and an additional $100 a year per vehicle for transit when we ride on roads that are worse than third world countries?  Can that pleaseˆbe part of the Black Thursday lobby day in Olympia agenda?
I probably sound like a broken record on this subject, but it baffles me, and it increases my SAD when I see that the priorities of our riding advocacy groups spend time and energy on things like helmet laws and the like, and not on the day-to-day things that affect riders in a serious and meaningful way – like how much we pay in gas taxes and license plate renewals and what benefit do we get from it.   I actually suggested to a member of the House Transportation Committee my problem with paying an additional $100 per bike (some of which only get ridden a few times a year) in addition to my car, and suggested that maybe the $100 be per household and not per vehicle, and her response to me was “it won’t raise enough money and be glad you can afford so many bikes, some people can’t afford a car.”   I just shook my head and realized it was futile talking to her.
But that my friends is what we are up against and that will affect us as riders far more than any other legislation.   And if our advocacy groups don’t step up and start making some noise, I’m going to doubt it will get any better.   It makes me sad indeed, as I ponder the sun and reserved spots for motorcycles and golf carts.
Gary can be reached at roadsigns@comcast.net and you can read his blog at http://grgardner.livejournal.com or http://www.grgardner.com
Subscribe