I've always been irritated by redundancies and people not thinking things through when making directional signs etc.   One of my favorites is posted outside of many Seattle Housing Authority low income housing developments - i.e. "projects", which say "Illegal Activity Prohibited In This Area".   Ummm OK, so is illegal activity allowed somewhere else?   Or "ATM Machine Inside".   ATM stands for "Automated Teller Machine" so an "ATM Machine" is an "Automated Teller Machine Machine" or a machine that makes ATMs.   And we've all seen road signs that say "Motorcycles Use Extreme Caution".   I assume that plain old regular caution isn't enough?   What exactly is extreme caution?   However, given the little accident I was in this summer and several near misses, I decided that the entire state of Washington should have this warning in my QT column for October....

Most if not all riders are “cautious”.  We have to be to stay alive.  Which is why I always kinda wonder at the warning signs along the road near something going on, usually road construction, that says “Motorcycles Use Extreme Caution”.  As if “regular” caution wasn’t enough?   What exactly is extreme caution anyway?   Anymore these days I’m going to have to say we should always be using extreme caution when we ride.

But after being rear-ended on my bike while waiting for a left turn light in Yakima by a careless pizza delivery boy last month, (luckily I wasn’t hurt and the bike only had minimal damage, thank you) as well as having three near misses with idiots turning left in front of me in the past month alone (one just an hour before I sat down to write this in fact), I’m convinced that it rings true in Washington.   We have the worst drivers in the world here in the Northwest.

But I guess we don’t actually have the worst.  Officially we are the 34th worst out of 194 places ranked.  The other Washington – as in Washington DC – has the bragging rights for the worst drivers in the nation according to Allstate Insurance’s annual “America’s Best Drivers” report.  But hey, Seattle beat out Portland!  Apparently Oregon drivers are even worse than Washingtonians.   Go figure.  But it doesn’t explain why we are so bad – or what we could possibly even do to fix it. We in Washington tend to be 28.8 percent more likely than the national average to get in an accident. 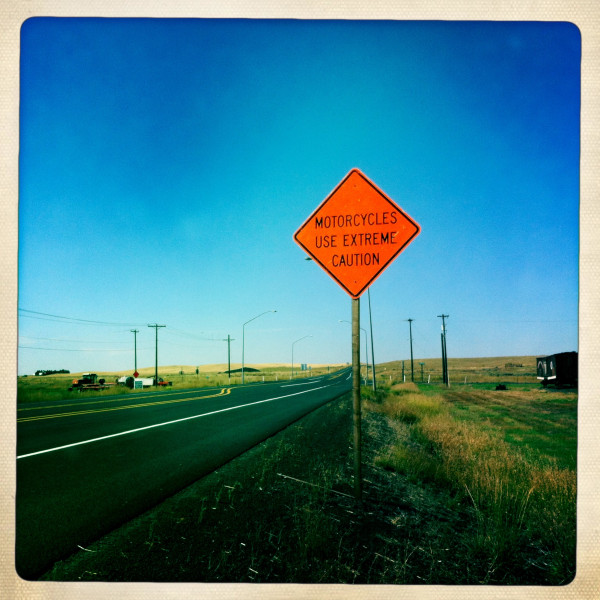 How scary is that?   Well if that doesn’t make you use even more extreme caution as the sign says, this will.  A recent University of Washington study shows that half of distracted drivers are texting.  Half!  What the hell?!?  Didn’t we make this illegal a few years ago?   Doesn’t anyone pay attention to these things?   I guess not.

I’m at a loss to explain why drivers here are so bad.   Especially given the “nanny” tendency that most Washingtonians have – always willing to tell others what they should do and that they should obey the letter of the law.  I don’t think additional new “laws” will help either.  It hasn’t with making texting illegal – people are just ignoring it.   According to that UW study, of the drivers seen using electronic devices, 45 percent were seen texting!   Another 21 percent were talking on the phone without hand-free devices, i.e. hold the phone to their ear, in violation of the law.  Already The Olympian newspaper is calling for a total ban on hand-held devices being used in cars.  An outright ban.  Well that’s the Olympian for you – more laws are better.  But that’s the kind of reaction we can expect if something isn’t done to change behavior.

It’s been proven that texting and talking are as dangerous as drunk driving.  The state patrol is always doing emphasis patrols on drunk driving – why not with texting and driving?   Do we need a group such as “Mothers Against Drunk Driving”  (MADD) to form up after a set of tragedies?   Since these I want to take a baseball bat to these numbskull drivers, maybe “BATT – Bikers Against Texting and Talking”?   However, “Mothers” have a more wholesome image and reputation and will get wider media play, so maybe “MATT” would be better.  What will it take to get this on the radar other than a few news stories – maybe a biker or two getting splattered like a bug on someone’s windshield?   I hope not.

I have an idea.  How about our motorcycle advocacy groups taking this on -- making it a centerpiece of a multi-year legislative campaign.  Advocating for additional emphasis patrol funding to go after all impaired drivers – drunk, texting, talking, or just plain stupid ones!   This would have a measurable effect on all of our safety – more so than repealing a helmet law, or allowing free left turns.  I’m serious about this.

Yes it is our responsibility as riders to pay attention, but it doesn’t do us any good if we are the only ones doing so.   And our rider advocacy groups do work for us – they are supposed to anyway.   Shouldn’t we all be up in arms about this?   How safe to you feel these days out on the road, and after this glorious summer, how many near misses did you have?   I gather to say more than you wanted.

If we don’t somehow change this behavior – and enforcing the law is probably the only way that will happen, someone is going to pay a heavy price.  I hope its not me – I hope it’s not you.   But it will be someone, and if we don’t do something, we should probably just change those signs at the border to say “Welcome To Washington – Motorcycles Use Extreme Caution”.