The change from Summer to Fall is usually very dramatic and sudden, unlike the transition from Fall to Winter -- or Winter to Spring and Summer.   Fall kinda just jumps out suddenly as the leaves change and the temperatures cool and the Christmas decorations go up at Costco.  (That's how you really know its fall -- the stores start selling Christmas stuff).

The UPS man brought a box the other day -- something I'd been expecting, but when I opened it up the combination of what was in it reinforced that seasons change and some roads do end.  My ex-husband Tony and I were married up in Whistler, BC back in July of 2003.   And although we've been "divorced" since 2008, and he's lived in Florida since 2010, we have still been "technically" and legally married.  A legal divorce was something we really couldn't take care of until this year when Washington recognized same-sex marriage and thus one of us lived in a place where it was recognized and thus could file for divorce.   Not that it's a big deal, it's just something we've needed to take care of.

I did some research and found that we could file for divorce in any county in Washington, and if I filed in Lincoln County, we wouldn't need to appear in person before a judge.  We'd just file a couple of rounds of paperwork and the judge would sign them and that would be that.   I had the paperwork drawn up for an uncontested divorce and sent them to Tony for his signature and have him return them to me so I could file them.   He returned the first round of paperwork -- the formal petition for dissolution of marriage -- with his signature in that UPS box I got the other day.

And also included in the box, Tony sent a small plaster footprint made from our dog Lucy who passed away a few weeks back after suffering from a lesion on her brain and other old-age issues.   We got Lucy on our anniversary back in 1998.    Lucy has been with Tony in Florida since he moved there.

So there in that box, on my dining room table, were two more signs that a chapter in my life has or is ending.   Signed divorce papers, and the last tangible from our dog Lucy -- the last dog I've had and will have for some time I think. 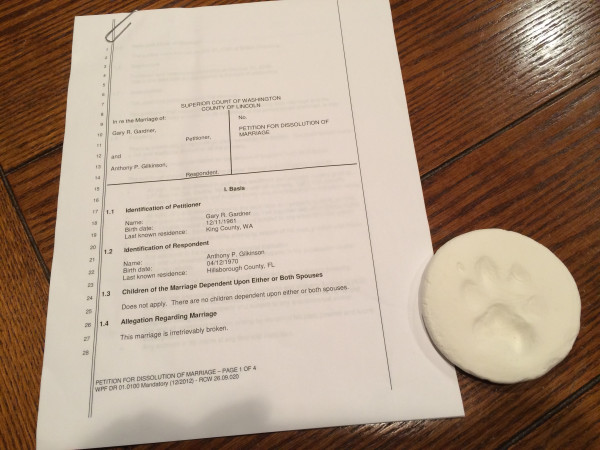 Now neither of these make me overtly sad or sentimental, don't get me wrong.  I've long ago come to terms with both the ending my relationship with Tony (and by that I mean our marriage -- we remain, and always will be great friends), and with the loss of Lucy, both moving to Florida and her passing.  But there in that UPS box were two very tangible elements -- concrete pieces of evidence -- that this part of my life was ending, and that this chapter was coming to an end.  Just like Summer is changing into Fall.
Subscribe