It's a well known fact that I love burgers and burger joints -- which is the subject of my September column in Quick Throttle.  Ironically this column has generated more emails than any other column in four years!   I can write about the absurdity of trying to repeal helmet laws, or mocking electric vehicles, and Seattle's ultra P/C crowd and nothing.   But write about washing my bike with motel towels or burger joints and I get a crap load of email.  Go figure.

On another note however, one of the places listed in this column, and where the picture illustrating it was taken (the shot of that scrumptious burger and hand-cut fries that just looking at it makes me hungry), the venerable Ben Moore's in Olympia has closed!  I'm heart broken!   It was my hangout when the Legislature was in session and where I went for my comfort food when I was depressed -- which in Olympia tends to be all the time.   I don't know what I'll do now.

As I write this month’s column I’m recovering from oral surgery.  Way back when I was a poor college student I could only afford to go to a lousy but cheap dentist who graduated from some third world dental college who did a crappy job fixing two back molars.   For the last 25 years my current dentist has been trying to undo his handiwork and save those teeth.  We’ve finally given up and decided to have them yanked out, and some bone grafted in and eventually implant some new teeth.  I’m now subsisting on smoothies and protein shakes that friends are kind enough to bring me while I rest the left side of my face on an ice pack laying on my couch watching bad TV.

Meanwhile I’m both grumpy and hungry for chewable food.  Not that I need chewable food mind you – hell I might even lose a little weight (though I suspect I’m the only guy who could get stranded on a desert island, starve to death, and weigh more than when he got there).   The point of all this food talk however is that my Facebook biker buddy Clint posted that he was getting some food at a Sonic Drive Inn.  It thought about throwing a brick at Clint, but hey it’s not his fault.  Now I love me some Sonic and I wish to hell there was one here in Seattle, or even in Western Washington.   Apparently there is one in Ferndale where he’d ridden to, which albeit is a nice ride from Seattle, it’s not exactly convenient.  But then again, who needs an excuse to go for a ride to get a burger, certainly not me.

Lord knows we bikers love to eat.   I’ve often heard the Harley motto of Live To Ride, Ride to Live modified to Live to Ride, Ride to Eat.   So as I’m cursing Clint out in my head, I’m also secretly plotting a ride up to Ferndale for some Sonic as soon as I’m feeling well and able to chew.   But the comments after he posted that on Facebook started a debate amongst his online friends about which burger place was better.  Someone said “remember nothing beats a Whataburger” (again, another missing chain here in Western WA).   To which I had to reply, “In N Out is better than Whataburger, but it’s moot since here in Western WA there is nary a Sonic or Whataburger or an In N Out to be found.”   What’s more there isn’t a Steak ‘N Shake either, or a White Castle. 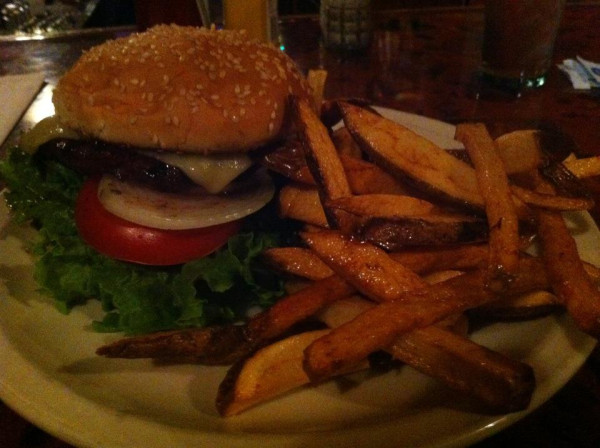 Burger joints are my thing I have to confess.  You might as well call me “Wimpy” after the Popeye character who would “gladly pay you tomorrow for a hamburger today”.   It’s a “comfort food” for me too, and feeling sick as I do now, I’m craving some comfort food.  I’m so tired of fruit smoothies.  It looks like Carmen Miranda’s hat landed in my blender and on my countertop.

There’s nothing more filling or satisfying to me than a great burger after a ride on a scoot, be it a few miles from my house down to Alki Beach, or after a long day of riding on a major cross country trip.   And although all the places I mentioned above are “fast food”, and pretty good, nothing beats a good burger at a small traditional drive in.  I used to have a hand signal that folks riding with me knew.  When someone would signal time for a food break, I’d make a swirl motion above my helmet, signifying to look for an old fashioned drive in with a giant swirly vanilla soft-serve ice cream cone on top.  That’s one of the sure signs of a great burger place.

Yes, this is a totally subjective list, and I’m sure it may start a debate just like my buddy Clint had on his Facebook page.   You may or may not agree with me with some or all of my list.  It’s not important.  What’s important is that you head out and enjoy one for me (for me I said, not on me), since unless I can run one through my juice machine, I’m not having one for a while.