Sometime in the early 2000s, my former husband Tony and I found ourselves at the old Tractor Tavern in Ballard listening to some unknown, but very good, singer songwriter open for one of my favorite Canadian folk singers, Garnet Rogers.   Her name was Karen Armstrong, and aside from one song, I don't really remember much of her performance.  That one song though hit me, and I love it to this day.   I bought her CD just for that song alone.  That song is "Leaving Lincoln County", and it's been running through my mind for much of the last few days as I've wandered about Central and Eastern Washington on this working photo shoot ride. 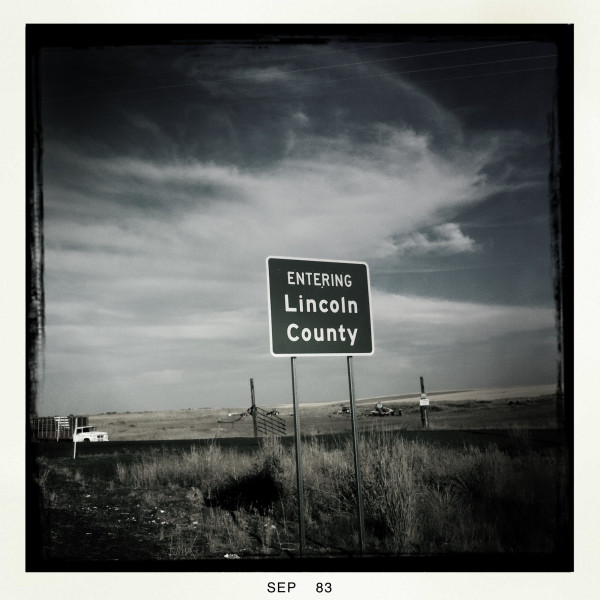 The song's lyrics speak of finding ones self as one travels, and the things one discovers while pondering the world moving about from place to place, and much of it, like the title says, takes place here in Lincoln County, WA.   As I was heading East on US-2 on Thursday, out of the corner of my eye I spotted a small abandoned cluster of buildings off the road in what turned out to be the near ghost town of Govan, which also happens to be in Lincoln County.   There, in the middle of a wheat field was a wonderful old derelict school house.  Unfortunately, the lighting was wrong -- the sun was in the West, and so it was backlit, and I needed East light.  And there was already another photo crew there shooting some professional pictures too.  I guess I'm not the only one who likes places like this -- but they were clearly posing models on it for something esle.   I made a note to hit it on the way back West on Friday.   In Spokane that night I was plotting my trip back and I noticed however,  a key place in the song -- Keller's ferry, and it was a few miles North of Wilbur which is just East of Govan.   Long story short,  I started tracing another route, incorporating the ferry across Lake Roosevelt and back down past Grand Coulee Dam -- both places I'd never been.

The song goes like this:  I am leaving Lincoln County, on the shore of Lake Roosevelt.  I wait for Keller's Ferry, to ferry me across.  Now this is no MTV video (and MTV doesn't even show videos anymore, but I digress), but here is a mini slide show instead.  I wish I could embed the audio to the song too but I can't. 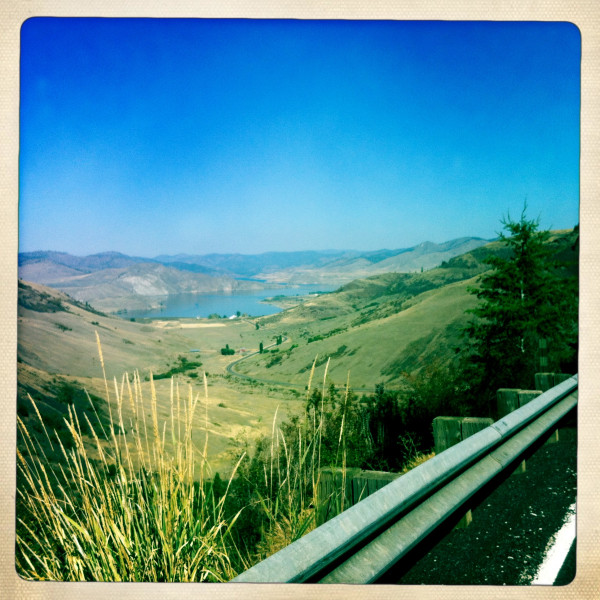 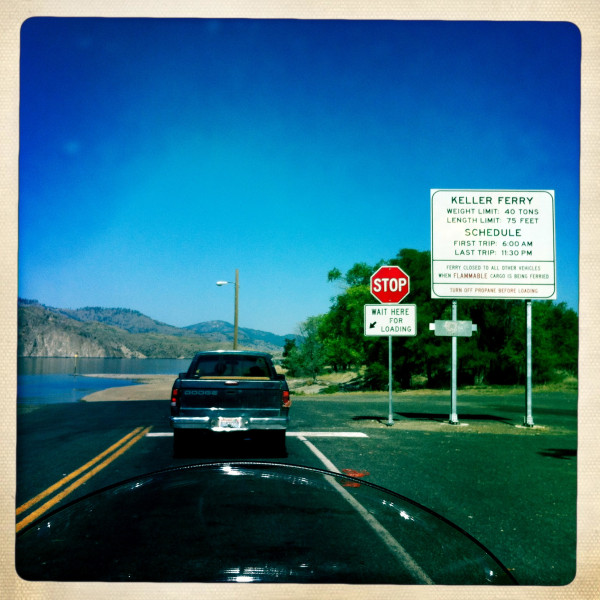 The picture on the left is the road leaving Lincoln County, winding down towards the shore of Lake Roosevelt, and ending at the stop sign for Keller's Ferry, while the "road" goes down like a boat ramp into the water, where the ferry docks and you drive up onto it.  The road once it leaves US-2 winds and drops from the prairie down to the lake like a long thin pasta noodle.  The ferry is not scheduled -- it just goes back and forth whenever there is a car waiting.   In my case, I had three cars and myself.   The road goes up into the Confederated Colville Tribes reservation towards the small settlement of Keller, and then on into Ferry County and it's county seat of Republic,  and then further North.  It's very sparsely populated.

The song goes on:  There is no one around for miles, it's just me and this old ferry man.  White clouds in the sky, casing shadows on the lake.  Against the rail beneath my parasol, staring at the distance as if one more time I could see your beautiful face.   And the Ferry is called Martha, the name of my mother..." 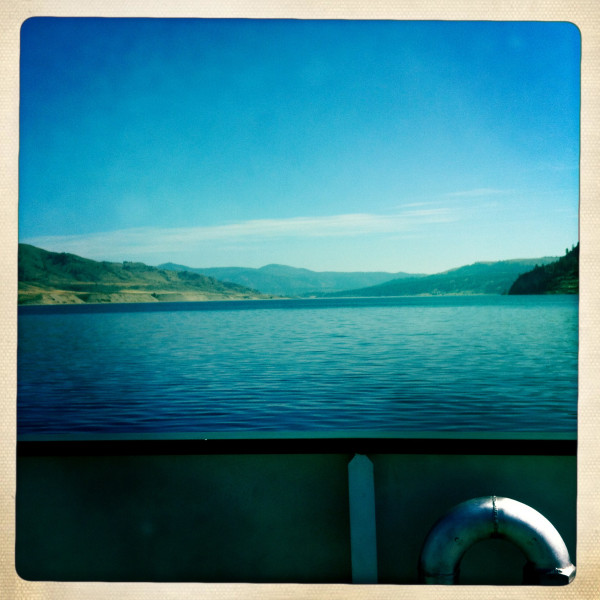 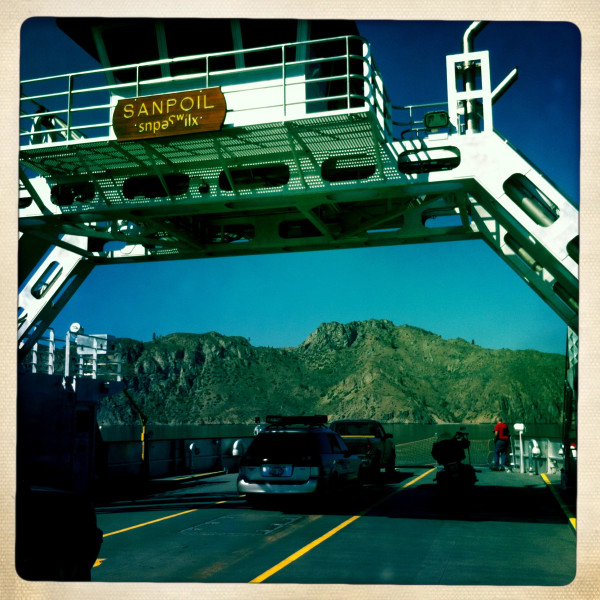 Well the ferry is no longer called "Martha".   The "Martha" was retired two years ago, and the state, in it's usual political correct fashion, named the new boat after something Native American, and it's called the Sanpoil in English, which is something unpronounceable in the Colville tribal language.   And I was not standing with a parasol, but I did have on a biker bandana.  But in any case, I could hear the song in my head the entire time.   And this section of Washington is absolutely beautiful.  It was nice to be riding down roads I had never ridden, and had really no idea what was up ahead.  It was warm, and the air smelled of pinon pines,  I doubt I passed three cars in an hour as I looped up through the mountains around Lake Roosevelt, across the Colville Reservation and back down to the giant Grand Coulee Dam.

In the small village of Nespelem, which is truly in the middle of nowhere and a town that time and people seem to have forgotten, I found a nearly intact 1950s vintage Texaco station -- abandoned, boarded up, but still shiny white with its original tile exterior, and pair of porcelain Texaco signs, surrounded by a bevy of broken down (albeit modern) cars scattered about.   This is something I would have never found had I not decided to follow the lyrics of a song that I've come to love.   Sometimes you gotta go with the gut. 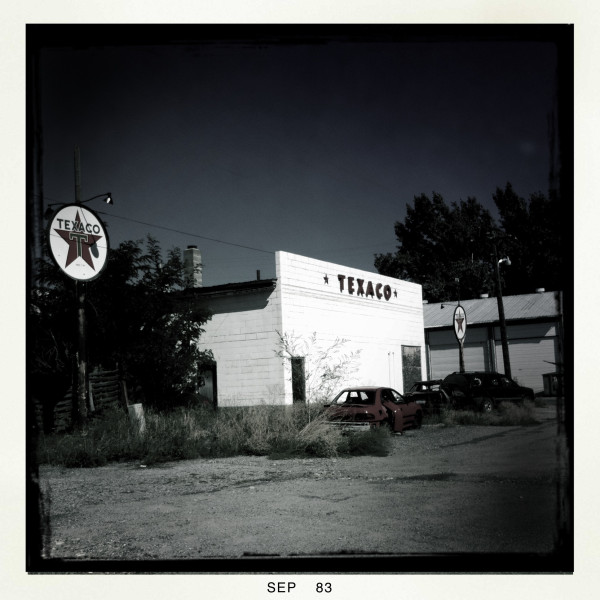 So has this "business" trip been a success?   I would say so.  Hell, anytime I get to spend a few days wandering on the bike is a "success".  I shot several hundred pictures, and I should be able to get some good images for the portfolio from them.   And that abandoned school house back in Govan -- the one that got me wandering all over and following the lyrics of Karen's song?   It turned out to be an amazing find.   I posted one picture on Facebook and it's gotten more "wows" than any other picture from this trip, and several friends listing it as their "favorite" of any I've taken.   I'll have to do some research to find the back story.  It's the second lonely school house out in a wheat field I've found on this trip and taken pictures of, but by far the most extravagant.   The only other things in Govan are three grain elevators along an old barely used rail line, and two or three run down houses.  It's about a half mile off of US-2 about 5 miles West of Wilbur, and doesn't show up on either my official Washington DOT highway map, or my Harley-Davidson road Atlas.   The only reason I found it was I saw something else down by the grain elevators and a gravel road leading down to it so I headed down it.   And this is what I found: 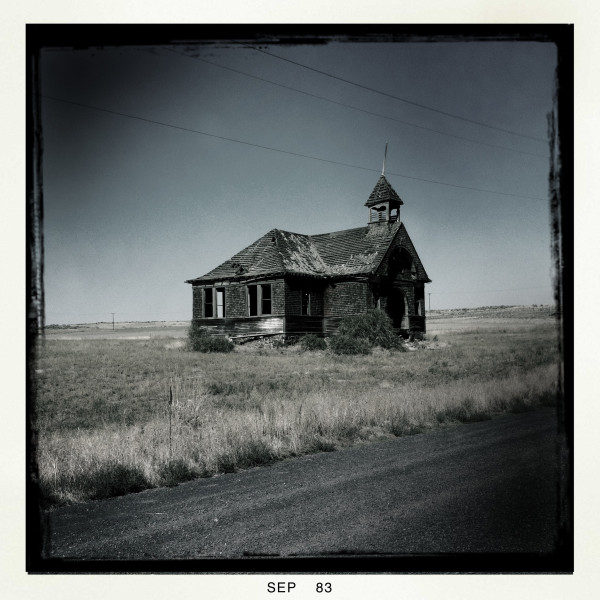 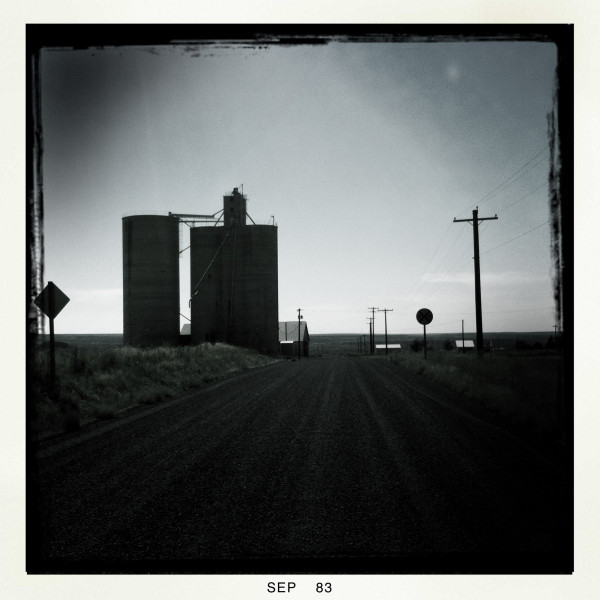 That's all there is to Govan these days.   That and the wind, and every now and then a grain truck to the elevator, and even more rarely, a rail car or two on the tracks to be loaded and hauled to the Port of Seattle to be loaded on a ship.   This part of Washington is full of ghosts it seems -- almost more than people.   US-2 winds its way through the wheat fields and is the Northernmost transcontinental highway in the US Highway system.  I-90 is many miles to the South.  Much of the route parallels the old Great Northern Railway -- the first transcontinental railroad built without any Government land grants, by the legendary railroad builder James J Hill.  In many ways he was the model for Ayn Rand's "Nathaniel Taggart" who built the Taggart Transcontinental Railroad in her novel Atlas Shrugged.  The Great Northern Railway was merged into the Burlington Northern in 1968, and the BN merged with the Santa Fe to form BNSF 17 years ago in 1996.   Rocky the Mountain Goat was the corporate symbol of the old Great Northern.  He's been gone now for 45 years -- but his ghost is still on a few overpasses out here along US-2, keeping company with the old gas stations, the abandoned school houses, barns, and homesteads out in the endless prairies underneath the blue of the fall skies. 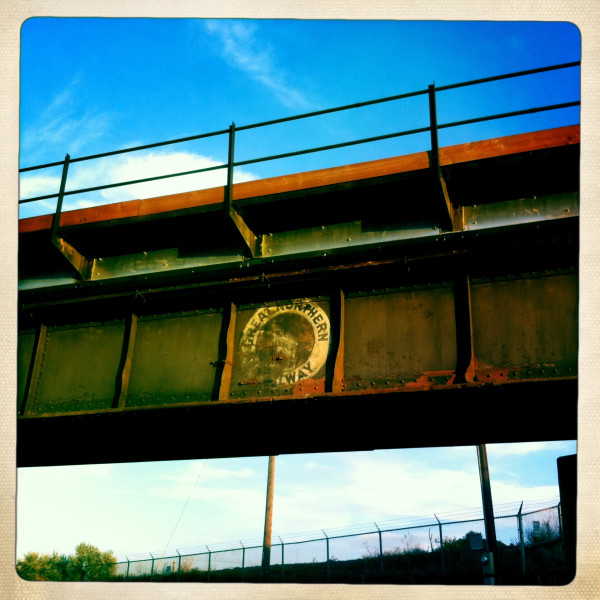