Objects in the Mirror Are Closer Than They Appear

Ever notice that at the bottom of many car side mirrors it says "Objects in the mirror are closer than they appear."   I never paid it much mind, but it jumped out at me while looking in a photo album today as I was searching for pictures of my old dog Lucy.   The picture below was taken of Lucy on the day that my former husband Tony and I picked her up from the Humane Society and we were taking her home.  You can clearly read the "Objects are.." and I realized that it is indeed true.   For the last three years Lucy has lived with Tony in Tampa, Florida.  And even though she's been in Florida, she's been closer than she appears. 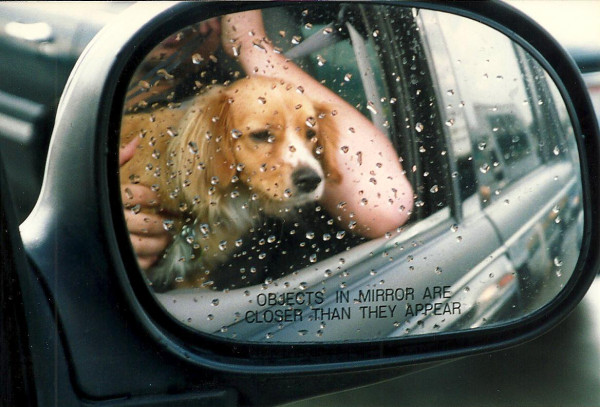 She's been in my heart and on my mind, and I see her smiling face several times a day in a wonderful portrait of her at my front door, and I often felt her presence in the house -- especially when the squirrels would be gathering nuts in the hazelnut tree off the back deck, or walk along the fence between our yard and the neighbors.  That used to drive her nuts.  While we shared custody after he and I separated, when he moved to Florida for his career, we felt it was best that he take her since my condo in Olympia doesn't allow dogs at all and I have to live there during the legislative session.   So she retired to Florida like so many old ladies do.   I wrote about it back when she moved:  http://grgardner.livejournal.com/2011/05/25/

She's been in very poor health for some time now, and Tony has kept me updated on her condition.  She's been suffering from essentially a doggie form of Alzheimer's caused by a lesion on her brain.  We were never sure of her age, but we estimated it as about 14.

Today Tony and his partner Larry had to end her suffering.   He called to tell me as they were sitting in the vet's waiting room.  I'm glad that Tony had Larry there to help him.   We cried together remembering her life and what a joy she was.   As the vet was administering the shot Tony told her to go and find our other dogs we had with her and who have also passed, Abbey and Zachary -- and to run and play with them like she did in her younger days.

This is the last picture I took of Lucy -- on the bed in Tony's guest room in the fall of 2012 when I was visiting.   She was deaf, and couldn't hear much, but she remembered me and was the happy and chipper little girl she always was.  That's how I will remember her, and I'll hope she's found Abbey and Zachary and they are running in the meadow on the other side of the legendary rainbow bridge tonite.   And she will always be with me, even though she's far away -- as "Objects in the Mirror Are Closer Than They Appear." 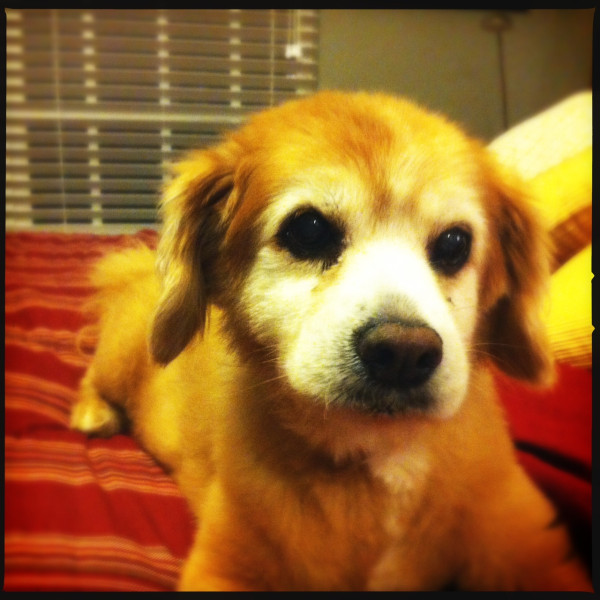