Just Me and Angus

This trip it's just Angus and me.  I haven't done a solo road trip this year at all given the length of the legislative session and other things, and so this short four day one might be about all I'll get.  I'm going to Banff with three other biker friends over Labor Day, and while it's a lot of fun, I do cherish my solo trips.  I generally only have a rough plan -- in this case it was to ride that section of US-97 on a photo shoot yesterday.  After that it was whatever I felt like.   I go where I want when I want.  I get up when I want, leave when I want.  I eat what I want when I want.  I stop and poke around at things that interest me and take lots of pictures of things that I want to shoot.   And Angus doesn't mind, he does exactly what I tell him to do. People ask if I'm lonely out on the road by myself.   Not at all.  I've got Angus, and we talk.  And we meet a lot of people along the way.  Just like the family of locals that welcomed me to the Cafe in Grass Valley yesterday, and the people who admire Angus on the street or at gas stations and say what a great looking bike he is and how jealous they are.   This morning in the hotel portico in Bend I spent a good 10 minutes loading up the bag and chatting with a guy who loved the bike and wanted to know all about it, and who wished me well on my journey.  People love the black denim paint on Angus, and the custom license plate C2CB2B for Coast to Coast, Border to Border.   I have my music on my iPod too, and the joy of riding down a road in the sunshine.  No, I'm not lonely at all.  I got up this morning in Bend, it was sunny and warm already and the view out my hotel room towards Mt. Bachelor was great.  I did my usual - went downstairs to the breakfast room and took my Harley Road Atlas to figure out where I wanted to go while I ate.   I had a friend in La Grande, OR -- a town much further East than where I was and who had invited me to swing by.  I started looking at a route that wandered all over East-central Oregon to get there when I got a text from him saying that he'd had a death in the family and had to go to Boise.  So heading that way to see him was out.   I decided then to head West.  I've never ridden West from Bend and it looked like a nice ride.  As they say, young riders pick a destination and go -- old riders pick a direction.  I guess I'm an old rider.

So off Angus and I went -- the sun shining on my back as we headed West down US-20.   I leaned back against the T-bag on the passenger seat and put my feet up on the travel pegs, cranked up the i-Pod and just soaked it all in.   Being on the dry side of the state it was warm and a bit dusty and smoky from wild fires, and the trees are pinion pines and the dirt a reddish brown.  It smelled wonderful.   US-20 is more or less straight as an arrow West of Bend towards Sisters and up into the Cascades, and there was a fair amount of weekend traffic as far as the town of Sisters.  After that I had the road pretty much to myself as it climbed higher and higher, and got greener and greener. 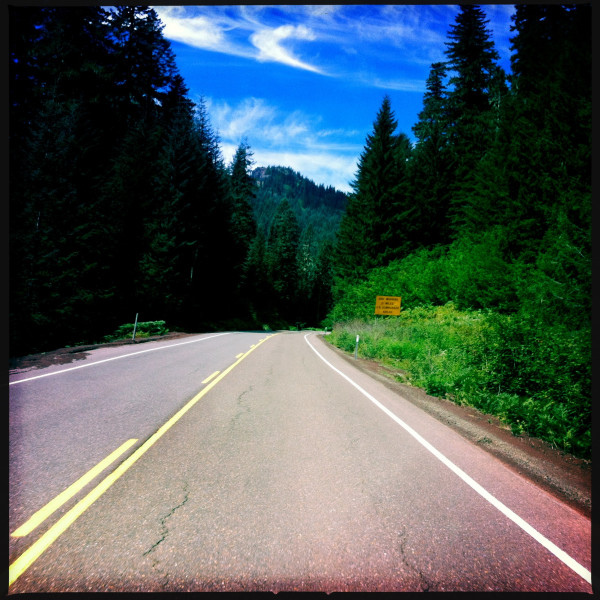 I was very surprised at the sparse traffic on the highway.  It was rare that I saw someone coming towards me and I didn't catch up with anyone going my way and no one caught up with me.   Having the road to yourself is both scary and wonderful at the same time.  Scary in that you wonder if the apocalypse has happened and you are the only one left, and wondering if something happens who will rescue you.   Wonderful in that you have the road to yourself and no one to distract you, delay you from turning into view points or making U turns when you see something cool and go past it!

The road down the other side into the Willamette Valley is steep and very curvy and a blast to ride.  Apparently according to a sign at a view point,  this route was the one used for the first transcontinental automobile trip in 1905.  New York to Portland in 44 days over this very pass.  It must have been something going over on an old wagon road.  Now that's a road adventure.

Oregon's Willamette Valley was where the pioneers on the old Oregon trail were headed in the 1840s.  It's a long fertile valley that is very pretty and populated with towns all along the way.  I rode US-20 as it came down out of the Cascades and crossed the valley as it headed towards the Pacific.   We went over the awful I-5 that cuts like a knife through the landscape and kept going west until I got to the town of Corvallis where I stopped for lunch along the river and then turned north on OR-99W, which is the old highway that runs along with the railroad up the West side of the Willamette Valley.

Just West of Salem is the small town of Monmouth, home of Western Oregon University.  It's small campus in this old town looks almost like an East Coast liberal arts college.   My Mother's uncle Leonard Rice was the President for many years before he passed away in the mid 1980s.  Leonard was a writer like me, and having read many of his wonderful letters and his book which is about the old highway that ran through his small town, I realized I must have some of his genes in me.   His stories and letters are like mine, in the same conversational voice and rich in details that are wonderful to read. And he has romanticized the highway that ran through his boyhood home of Clifton, Idaho like I've come to love US-89 the highway that ran through Salt Lake when I was growing up.   Just before he died the University named their Performing Arts center after him, and so I swung through the campus to see it. 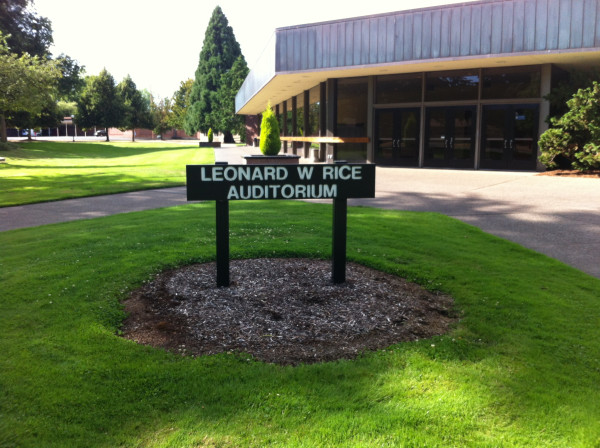 I wish I'd had a chance to get to know Leonard and to share my writing with him and to engage in story telling.  I'm sure I'd be a much better writer if I had had that opportunity growing up.  But I only recall meeting him once in my life before he passed, and long before I took up the pen (or the keyboard).

It was getting late so I set my sights on a hotel room outside Portland and headed back up 99-W.   This route certainly beat slogging up I-5 on the other side of the valley, as it wound through endless farm fields.   Apparently the hay fields and other crops are giving way to vineyards and wineries.   Judging from the signs along the way I could very well have been driving through the Sonoma Valley in California or in Southern France.   Indeed it kinda felt like driving in the English or Scottish countryside too with it's rolling hills and small towns.   It seems that everyone is in the wine business these days.  If you grow some grapes and have an old barn or build a new building and paint it to look old, devise a cleaver name like "Tuxedo Frog" (I'm not kidding), or add "Cellars" to your family name, you have a "winery".    But every now and then there's signs of a traditional farm, and even a relic or two, looking out of place sometimes amongst the grapes. 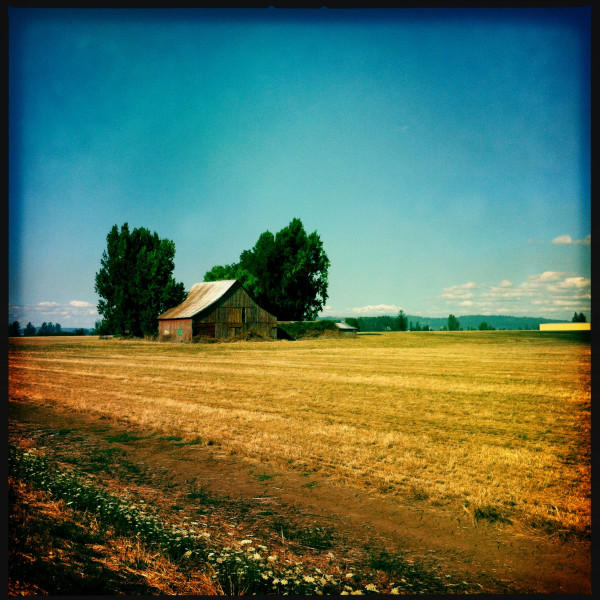 The road finally merged with I-5 just about at the Portland city limits and I took the freeway through the city to my hotel which is on an island in the Columbia River just yards away from Washington.  All in all it was a 280 mile day -- just me and Angus, out in the sunshine, riding roads we've never been on.   Yes I was by myself.   But no, I wasn't lonely at all.  I had the whole world framed between my fists.
Subscribe