Or to put it another way, (read it out loud now) Bend, over night.  For some reason I find this rather funny.   Go figure.  At any rate, I woke up in Yakima to rain.  It followed me over from Seattle I guess.   I slept like a rock all night, and woke up feeling fine and with a nice normal BP after everything that happened yesterday.   The reason I headed this way, as well as spend the night in Yakima in the first place was to ride down US-97 into Oregon in order to shoot a few abandoned places I recall seeing on my last trip down this way on the bike in 2009.  This was before I started doing the Ghost of the Road project, and I had wanted to revisit this route and perhaps take some more pictures. 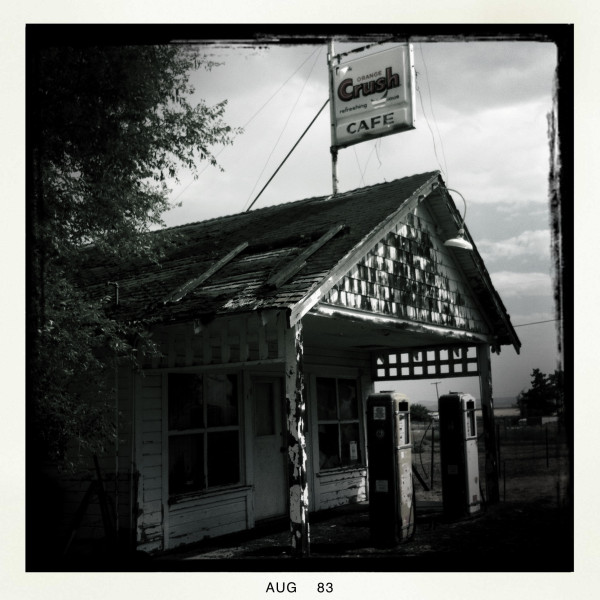 The Harley dealer in Yakima did not have the correct lens for my broken tail light, but they had one that would work and so it's a temporary measure until I can get the right one.  I'll check the Bend HD dealer in the morning, and if not, order it when I get home to Seattle.  The rain finally let up around 11 and I hit the road, heading south on US-97.   In addition to the Ghosts photo series, I've started a new one (at the suggestion of my friend Chris

ironchefpinoy).  It's another fascination of mine -- old neon signs.   Riding out on the old main drag of Yakima and any town for that matter, one tends to find some great examples (often they are dark and the business gone too).   Neon signs are tough to shoot, so I'm still experimenting with the right digital film/lens combo and not having much luck.   Anyway I pulled off to shoot one and while I was doing so a guy rolls up in a golf cart to ask what I'm doing.  He's a car salesman and his car lot straddles both sides of the highway.   We get to talking as people are wont to do with bikers and talked about his desire to buy one and growing up riding and such.   Another ten minutes goes by before I'm back on the road, but I didn't mind.  Today was a nice day to just amble.  I had plenty of time.  The temperature was just perfect, and the high cloud cover kept it from getting hot.  I spent the day riding in a t-shirt.

Dropping down towards the Columbia River, the road goes through an area that just two weeks ago was closed because of a large forest fire.  Both sides of the highway are burned black and it smells like an old campfire for quite a distance.   After crossing the river into Oregon, the road climbs back up to the high plateau that is covered with wheat farms and for all intents and purposes could stand in for Kansas.  It's flat and one can see for miles.   The wheat had just been cut, and it had rained recently -- indeed it was raining in the distance, and one could watch the storm far away and smell it on the wind.   I can't begin to describe the smell -- fresh cut grass, sage, rain, all mingled.   It's something one misses in the car for sure, but that is forced up your nostrils on a bike and encourages one to breathe it in deeply. 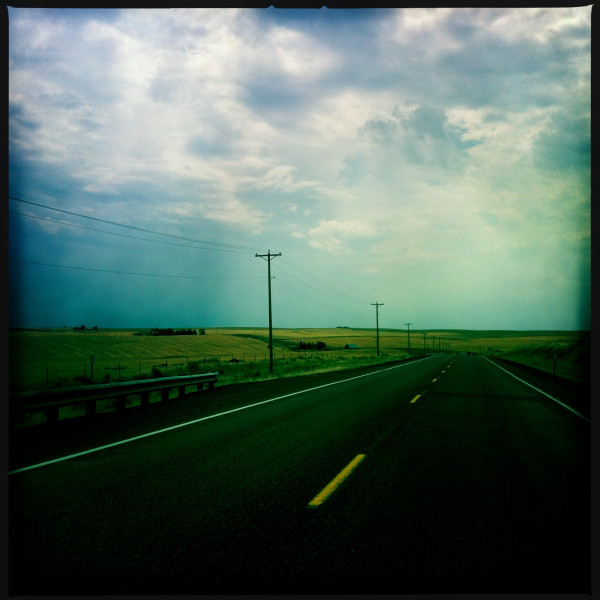 There's very little traffic on this part of US-97, and no towns to speak of -- just a few small hamlets, and no gas stations (there's even a warning just after crossing the river that there's no gas for 90 miles).  The towns, if you can call them that, are just a few buildings lining both sides of the highway, most are closed, and maybe a post office and a house or two, and a grain elevator.  That's about it.  Around 2pm I was getting a bit hungry and I rolled into Grass Valley, OR.   I went past a small little cafe that was essentially a lunch counter with a couple of locals in it, and realizing I'd likely not pass anything else for a while, and it looked good, so I did a U turn and went back.

I was welcomed inside just like I had come home after a long visit.  These folks didn't know me from Adam, but I was welcomed and told "sit anywhere that someone isn't sitting."   I was handed a menu, but the sign saying that today's soup was vegetable caught my eye so I had a bowl with a slice of peach pie.  They were discussing some town gossip and then asked me where I was and where I was going, and what did I think of the new Indian motorcycles, and on and on.   They all were farmers and their wives -- in their 60s or older, and reminded me of my late Uncle Ted and Aunt Helen in Idaho.  That's one thing about a small town -- everyone knows everyone and they love to talk to strangers riding through.  I could have been in an episode of Andy Griffith. 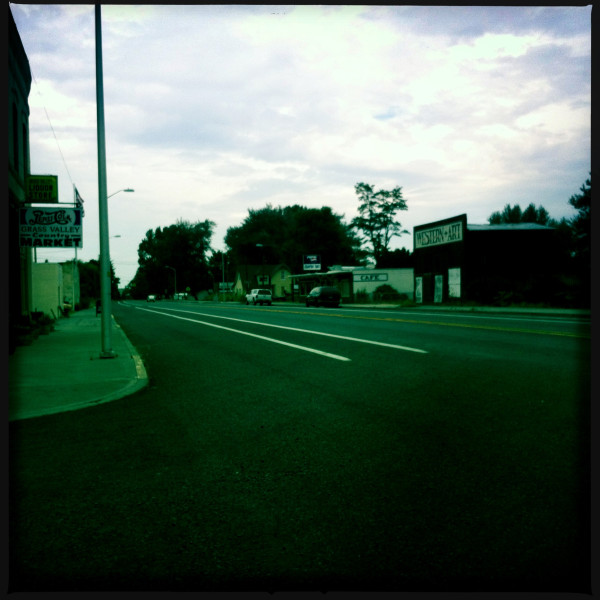 I saddled back up and headed down the road, my i-Pod playing some nice tunes, the highway more or less to myself, a full tummy and warm weather, rain fresh air, and a view for miles.  This is why I ride.  This is why I wander and see what's around the next bend.   And what was around the next bend is what I was after.   I remembered this old gas station from my last visit, and sure enough it was still there.   I pulled off and the sun broke through the clouds, but the storm was in the distance and the lighting was just perfect. 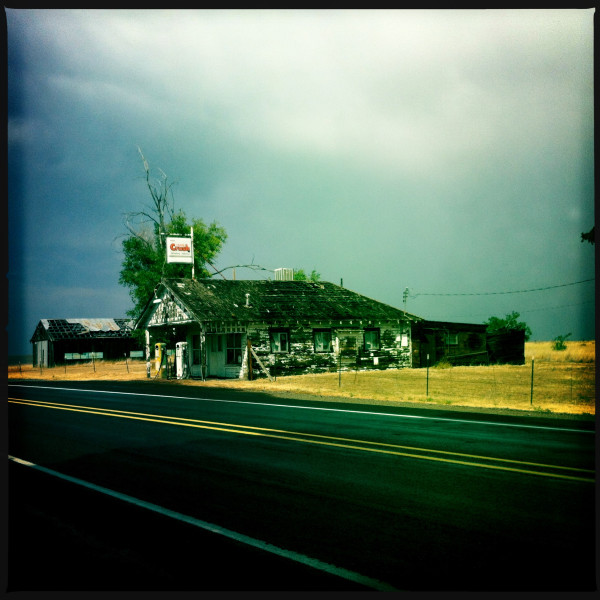 I'd love to know the story behind this place.  The dot on the map says "Kent".   The Orange Crush sign on the roof is plastic and was lit with florescent tubes so it dates from the 70s, but the pumps are 1950s vintage.   Who knows how long it's been abandoned.   It sits all alone along the side of the highway -- the rest of Kent, Oregon sits behind it a block or two off of US 97, and is in almost as abandoned a state as this station.   I wandered all over town for about an hour taking some photos that I hope I can use in the Ghost's of the Road book.  The only person I saw was a lady driving a huge grain truck that made a delivery to the little local elevator. 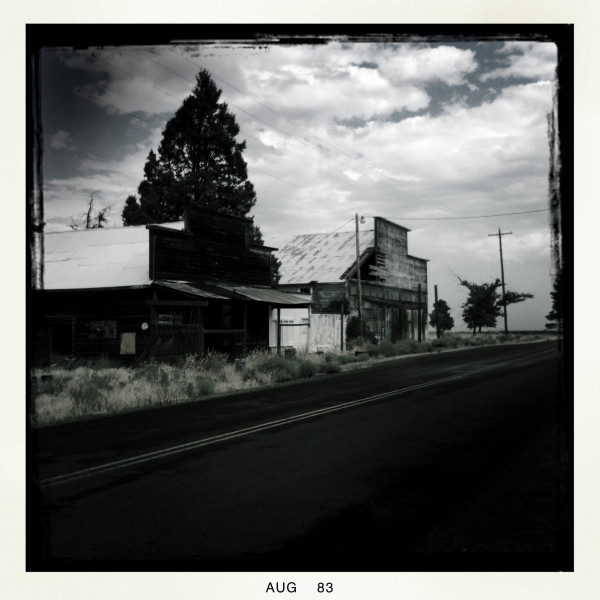 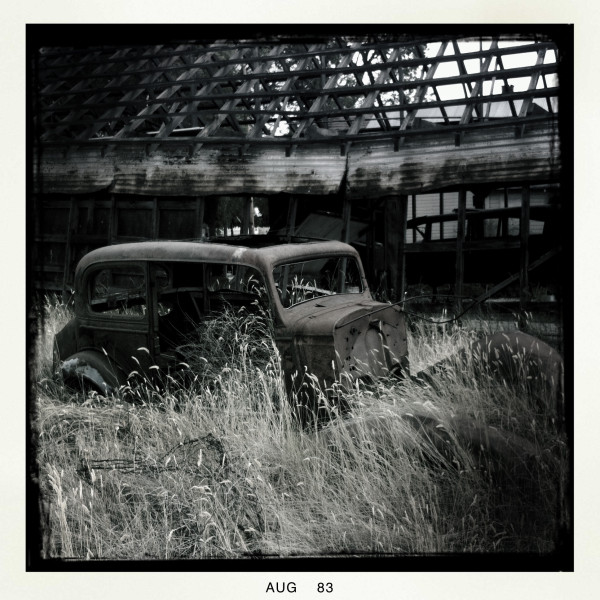 I was still 80 miles outside of Bend, and got back on Angus and fired him up.   The wind picked up and the smell of the rain was almost intoxicating.   The high plains of Central Oregon are vast and empty, and even though US-97 is the main road, its so lightly trafficked that one can hear the trucks from quite a distance.   The wheat and the smell of the rain and the empty buildings with the trucks in the distance made me think of John Denver's song "Back Home Again"... "there's a storm across the valley, clouds are rolling in.  The afternoon is heavy on your shoulders.  There's a truck out on the four lane, a mile or more away.  The whining of his wheels just makes it colder." 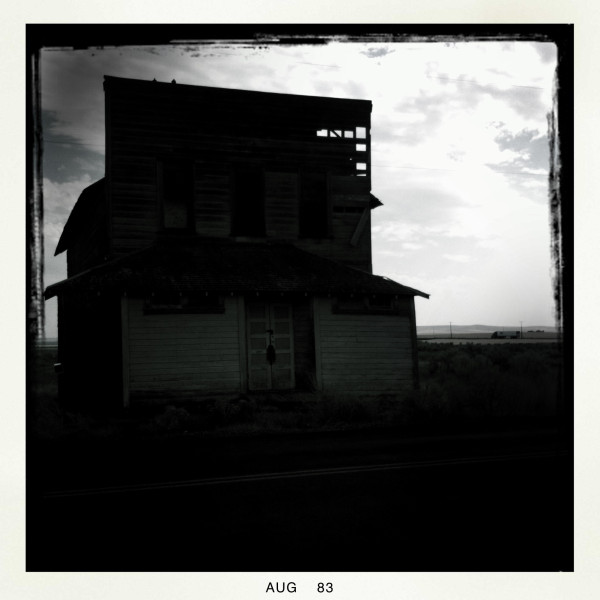