It's been a great July -- no rain and comfortable temperatures.  Angus, my big bike, is in the shop with some issues on the charging system and the fact the dealer can't get the right part, so I'm down to the other two solo-seat bikes which aren't great for long rides.  Nonetheless, I've been out a bit on some short putts and enjoying the weather a lot.

My column in the July issue focused on some family history.  My editor really liked it and said it was "way out of my norm" (I suppose my "norm" being that of a grumpy curmudgeon, I don't know), and that "makes it perfect", plus he said "its a good story."   I pretty much have free reign to write about anything I want which is good -- but after almost four years, its a challenge to come up with 900 words every month.

I wonder sometimes about genetics.   It’s the stuff in our genes that makes us who we are in many respects – that’s most likely why I’m bald and built like a fireplug.  It’s in my genes.  And I suspect that it’s partially genetics that influences our personality too – which is maybe what got us into riding in the first place.   Last weekend I was waiting for a friend who’s an instructor for Evergreen Safety to finish up his class, and I was watching a father about my age who was taking the class along with his roughly 20 something son.   I spoke to them after and learned it was a Father’s day present from the son to his Dad.  How cool is that!  I flashed back to my own father teaching me to ride way back when on an old Yamaha 100 dirt bike in the national forests of Utah and Wyoming.

It was an old yellow-gold late 1960s Yamaha 100 dirt bike.   I was maybe 11 or 12 years old.   We’d go fishing up along the Henry’s Fork river that runs from Utah into Wyoming, often going with family friends who had scores of dirt bikes and mini bikes for us kids to ride around the campgrounds and forest service roads.  I’d ride behind Dad holding on to our fishing poles, and eventually he taught me to ride with him sitting behind me.   After I got the hang of it we even rode 40 miles into the town of Green River, Wyoming for some “supplies” (most likely a case of beer).   Wyoming cops back then were probably a bit more lenient – allowing 12 year-olds to drive dirt bikes down paved roads with their Dad’s on back holding a case of beer.

I would be willing to bet that it was from our father’s that nearly all of us got the “bug” to ride.   It doesn’t matter if you are male or female, my hunch is that for many of us our first rides were behind Dad (and in a few cases Mom), holding on as they roared out of the driveway on a bike.   From that moment on, we were hooked.   Whether that led to learning to ride ourselves, or just being content with riding behind someone, that first spark most likely came from Dad.

I never got a chance to ask my Father before he passed away in 2007 where he learned to ride, or where that spark came for him.  I do know that my Grandfather, his Dad, didn’t ride.   But over on my Mother’s side of the family, my Great-Grandfather rode.

I was cleaning out some files in the office a while back when I came across an old picture and a note from my maternal Grandmother.  She had just turned 95 when she sent it.  She had found somewhere in her papers and photos an old photograph of her mother shortly after she had married her father (my Great-Grandmother and Grandfather).   It probably explains a lot.   I know I've loved riding since riding behind my Dad when I was a kid. 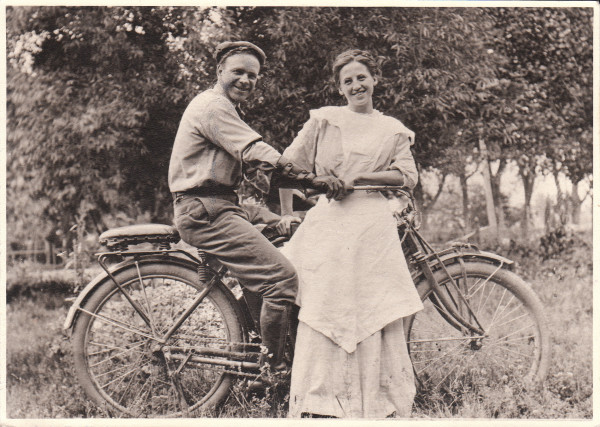 This is my Great Grandfather and Great Grandmother, Quince and Myra Rice.  According to my Grandmother, this photo was taken in about 1911 in Farmington, Utah.  Grandma didn’t remember the motorcycle at all, so it must have been long gone by the time she was old enough to remember such things.   According to my Great Grandmother’s letters, he used it to motor about Davis County Utah reading meters for the utility company.   Grandma she said she even thought the bike might have been a Harley, but she doesn't know.  I asked her why she thought that and she told me that when she was younger she remembered her youngest brother Larry coming home on his motorcycle to visit.  The motorcycle had stalled in the yard and Great-Grandmother (the same one in this picture) came out onto the front porch at their home in Clifton, Idaho and yelled at him to "Get a Harley!"  Apparently from what Grandma says, that was a common thing to say to your friends if their motorcycle broke down and had trouble back in those days.  So I guess even back a hundred years ago there were two kinds of riders I suppose -- those who rode a Harley and those who wished they did.  I imagine this is where I got it from as well.  Its a nice sunny weekend now -- I think I'll head out and ride a bit, and silently thank my Great Grandmother and Grandfather for somehow giving me this desire to hit the road on two wheels nearly 100 years later, and to my Father for teaching me to ride on that old dirt bike along the dirt roads of the Uinta National Forrest.   It’s in the genes.