The Man Who Never Returned

This post really has nothing to do about anything I normally write about, except maybe to illustrate how things get stuck in my head and I can't let go of them until I figure it out.  My friend Dave says I obsess over things.  I prefer to say I thoroughly investigate them.  It also probably won't mean anything unless you know of and have heard the song I'm talking about.

One of the first songs I ever learned on the guitar way back when I was 11 years old was "MTA" -- made famous by the Kingston Trio.   It tells the tale of a man named Charlie, who, on a "tragic and fateful day, put ten cents in his pocket, kissed his wife and family, and went to ride on the MTA".   The MTA being the Massachusetts  Bay Transportation Authority subway system in Boston.  It's a funny, simple upbeat song -- I always remember liking it as a kid listening to my parent's Kingston Trio albums, and I even did it as the only guitar player in my elementary school's ukulele club.

The funny part of the song comes when, apparently, his ten cents wasn't enough as he also had to pay "one more nickle" as an exit fare, which he didn't have, and Charlie couldn't get off the train.   So now he "rides forever 'neath the streets of Boston", and every day his wife goes down to the Scollay Square Station (at quarter past two), and "through the open window she hands Charlie a sandwich as the train comes rumbling through."    Why she never gives Charlie the nickle he needs to get off the train we'll never know, but then there wouldn't be a song would there?

Meanwhile I'm in Boston this past week and I take a ride on the MTA, which now, like most transit systems, uses stored value cards that you buy from a vending machine rather than cash fares.  Much to my surprise and delight, the fare card in Boston is called a "Charlie Ticket" and it has a painting of a man holding a sandwich in the window of the train. 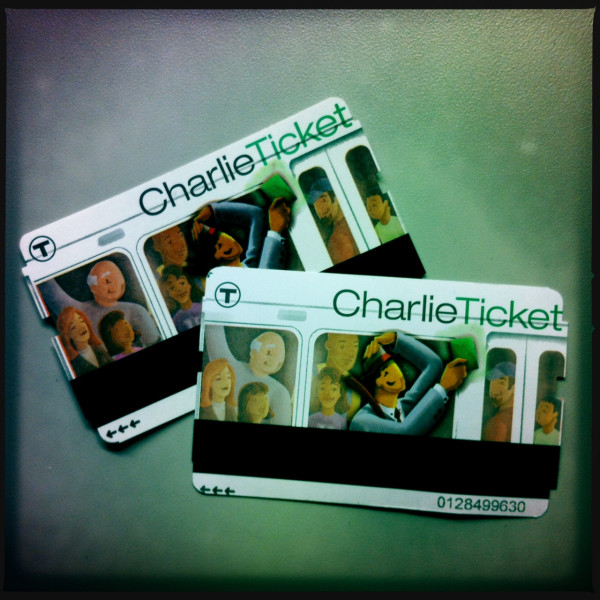 Gotta love a normally humorless transit agency embracing a silly 1960s folk song about a guy who rides forever on the subway because he can't pay his exit fare.  I thought a picture of me eating a sandwich in the Scollay Square station would be cute.   But on the current map there is no Scollay Square station, nor one of the other points listed in the song, Jamaica Plain.    Kendall Square Station where Charlie gets on the train in the song is still there, now called Kendall/MIT.  This got me to wondering (some would say obsessing) until I cleared it all up.   This is where the glories of the Internet come in.  A few quick keystrokes got me the answers.

Apparently the song was written in 1949 as a mayoral campaign race for a progressive/socialist candidate who had a platform plank to vote down a fare increase on the subway system.   There is a verse in the song that says "Fight the fare increase, vote for George O'Brien, get poor Charlie off the MTA."   The candidate actually was named Walter O'Brien and he lost, but the song made its way around folk song circles and was recorded by the Kingston Trio in 1959 who changed "Walt" to "George".   The MTA in 1949 was also much different than it is today.   "Scollay Square" is now called "Government Center", and while there is a neighborhood called Jamaica Plain, there is no stop.  The neighborhood of Jamaica Plain is on the Green Line as is Government Center, but Kendall Square is on the Red Line.   So when the song says he "Changed for Jamaica Plain", he must have done that at Park Street, where he caught a Green Line train.   He could have caught an Orange Line train out to Jamaica Plain, but that wouldn't work as it doesn't go through Government Center (or Scollay Square).  So when he got to Jamaica Plain on the Green Line he couldn't get off since he didn't have his nickle exit fare, and so they kept him on the train, which eventually went back along the Green Line and through Scollay Square -- where his wife gives him the sandwich every day, and so Charlie rides back and forth forever along the Green Line...the man who never returned. 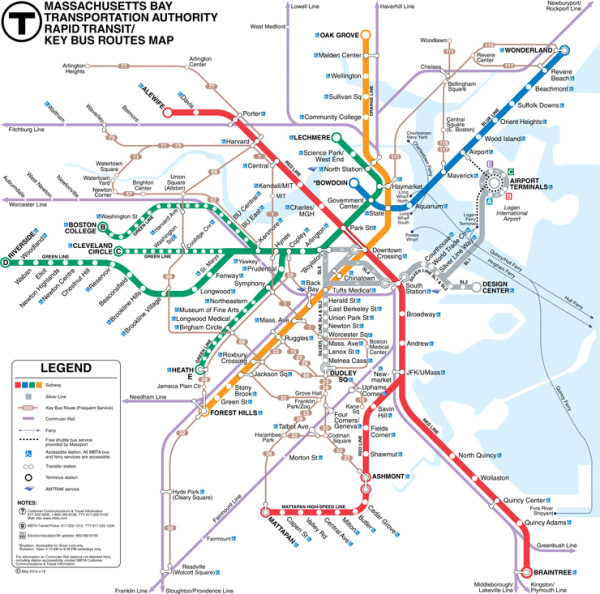 Let me tell you the story
Of a man named Charlie
On a tragic and fateful day
He put ten cents in his pocket,
Kissed his wife and family
Went to ride on the MTA

Charlie handed in his dime
At the Kendall Square Station
And he changed for Jamaica Plain
When he got there the conductor told him,
"One more nickel."
Charlie could not get off that train.

Chorus: Did he ever return, No he never returned
And his fate is still unlearn'd
He may ride forever 'neath the streets of Boston
He's the man who never returned.

Now all night long
Charlie rides through the station
Saying, "What will become of me?
How can I afford to see
My sister in Chelsea
Or my cousin in Roxbury?"
(Chorus)
Charlie's wife goes down
To the Scollay Square station
Every day at quarter past two
And through the open window
She hands Charlie a sandwich
As the train comes rumblin' through.

Now you citizens of Boston,
Don't you think it's a scandal
That the people have to pay and pay
Vote for Walter A. O'Brien
Fight the fare increase!
Get poor Charlie off the MTA.
(Chorus)
Subscribe