Slots and Las Vegas and Paying it Forward

No, it's not what you think, although I did play a few (well several hundred) spins on the Wizard of Oz machine this past week, and paid it forward into the Station Casino's pockets.   No, this is about a sandstone formation called a "Slot Canyon", and the adventure my friend Garland

garlandj and I had in his quest to see one up close.

Gar, having just celebrated his 31st birthday and his graduation from the University of Washington with his Master's in Social Work, and I, decided to do our annual June trip this year to Las Vegas and the Red Rock casino/resort/spa -- a favorite of mine, and since 2007,  the only place I'll stay in Las Vegas -- its a wonderful property.  Gar has always wanted to see a slot canyon as well, and since we were in reasonable proximity to some in Southern Utah, we decided to take a day and head up to Zion National Park to check one out.

For those of you who don't know, a slot canyon is formed in very soft sandstone when very fast water rushes over it.  They are excruciatingly narrow and very very pretty, and also very photogenic.  They are amazing formations and only found in UT and AZ in the sandstone canyons.   Below is a picture I took in Red Canyon, the second one we visited so you get an idea of what it's like. 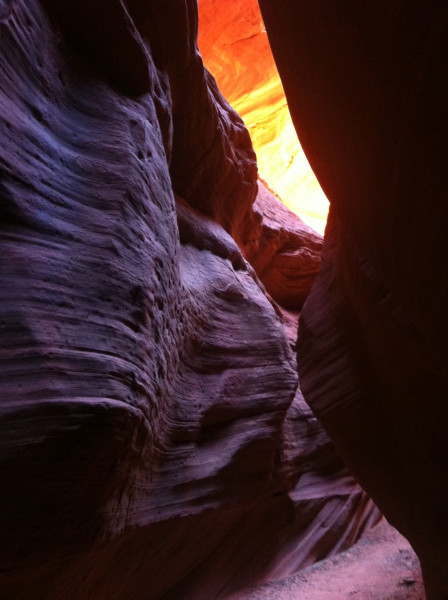 We did a little research on the Internet before heading up to Zion's -- about a 2 hour drive from Las Vegas.   According to one web page:  "Everyone visiting Zion should be able to go down the paved Riverside Walk which is wheelchair and stroller accessible for a peek at the magnificent and most well-known slot canyon in the world, the Zion Narrows and most can go at least a little way into the Narrows."   Since this sounded like the easiest and most direct way, and was so highly rated, we figured this would be the logical place to go.

We drove up to Zion, and on a Thursday morning, found it packed and got one of the last parking spaces in the visitor center lot.   Zion is closed to private vehicles and one has to take a National Park Service tram into the canyon.   We loaded in for the 40 minute drive up the canyon to the Narrows, and enjoyed the stunning beauty that is Zion Canyon.   At the end of the road we got out, along with a few hundred other folks it seemed and started up the "paved walk" and into the Narrows.   Once the paved walk ended we soon realized (no mention of this on the web page) that we would be wading in the Virgin River.   No matter, we were wearing hiking shoes and short pants. 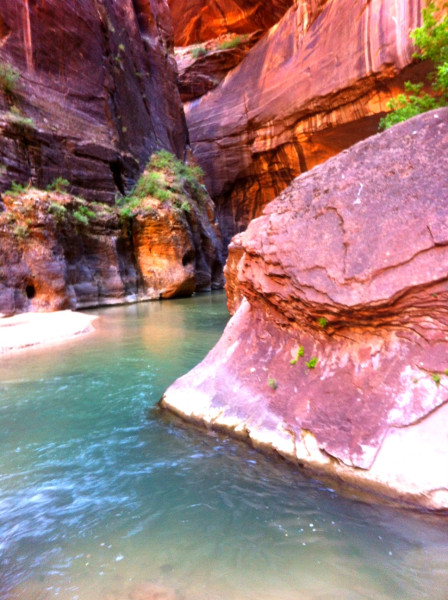 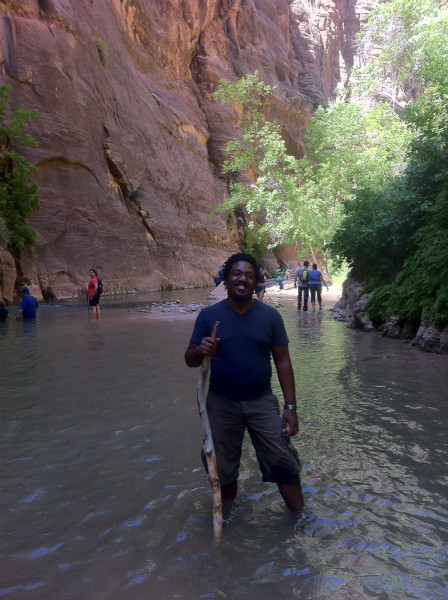 And although the water was deep in spots -- up to my thighs -- it was warm, and we joined what looked and seemed like a throng of Israelites going through the Red Sea.   We wandered up the canyon into the narrows for about a mile and a half, admiring the beauty and the scenery and trying not to slip on the slick rocks and fall into the water.   However it was not the slot canyon experience we were looking for (which is reflected in the first picture above at Red Canyon).   By the time we got back to the tram stop and then back to the car it was too late to go to another canyon I'd found on the same web page that was just outside the park and was more along the lines of what we were looking for.   We headed back to Las Vegas and decided to come back up on Saturday to the aforementioned Red Canyon.

On Saturday we got up and drove back up into Utah, following the web page directions to Red Canyon.   We had to traverse the only part of Zion Canyon that is open to vehicles to get there, and it was a spectacular drive -- one I think inspired John Lassiter when they did the scene in the Disney/Pixar movie "Cars" where Sally and McQueen go for a drive. 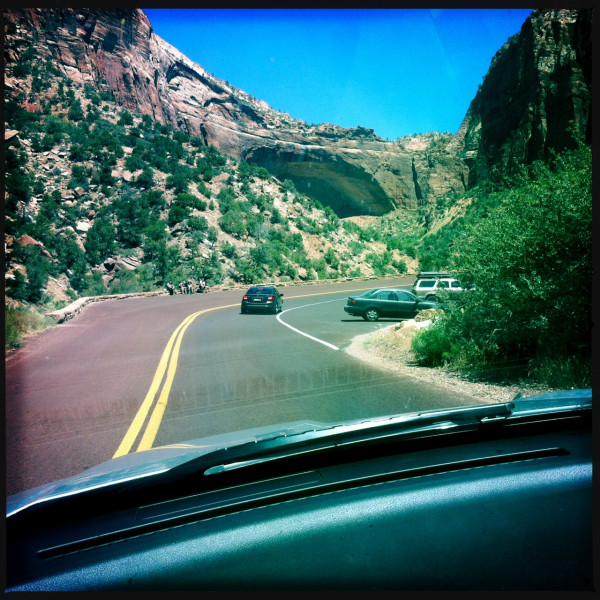 Outside the park we stopped in the small hamlet of Mt. Carmel Junction on US-89 and checked our directions.   Again, quoting the web page:  "Look for the ATV Club Trailhead -- sign is located 8.5 miles from the Chevron in Mt. Carmel Junction.  Follow BLM Road 102 to the slot canyon."   That is ALL and I mean ALL the web page said.   Please keep that in mind as you read the rest of this adventure.   I hereby absolve myself of any guilt for what happened next and blame it on the web page directions.

We found the ATV trail head and a small sign pointing down a dirt road that said "BLM-102".  The road was somewhat sandy, and we were in a rented Ford Explorer with 4WD.   While we were paused and assessing the road, a family riding a number of ATV's drove out and so I decided to ask them how the road was and if we could get down it and how far etc...  The patriarch of the group was named Chuck, a lifelong resident of Kanab, Utah, a few miles down US-89 from where we were.   He said we should have no problem, however his daughter Tammy disagreed.   We discussed it a while and decided, with their help, to try.   I will now quote verbatim from Garland's FaceBook post regarding what HE SAYS happened next:

So no wading through water this time. But a shit ton of sand!!! (Actually that's what the canyons are made of).

Today has been a crazy adventure. What started out as off-roading gone HORRIBLY wrong and sand EVERYWHERE, ended with the locals finally hauling us out and giving us a lift on their ATV's.

So here is the story: we decided to go look at slot canyons. We get off the main road and come to a very sandy one. I, of course, jump out of the car to test the stability of the sand. Gary, in his over optimistic and sometimes fool-hearty zeal for adventure decided we can do it. And after speaking with Grandpa Chuck who said we can do it if we have 4WD and against Tammy's advisement that we shouldn't, Gary chooses to go (against my better advisement as well). Good thing Chuck, Tammy, Sam, and Tasen decide to come with.

Needless to say, we got horribly stuck in the sand (no surprise there). I and Tammy and the boys try to push the car out pf the sand. This took several minutes. We finally get out and Grandpa Chuck says he'll lead the way. So we start off again only to get stuck a few feet later. Grandpa Chuck and Tammy's ATV breaks down over the ridge and they start walking back to the car. 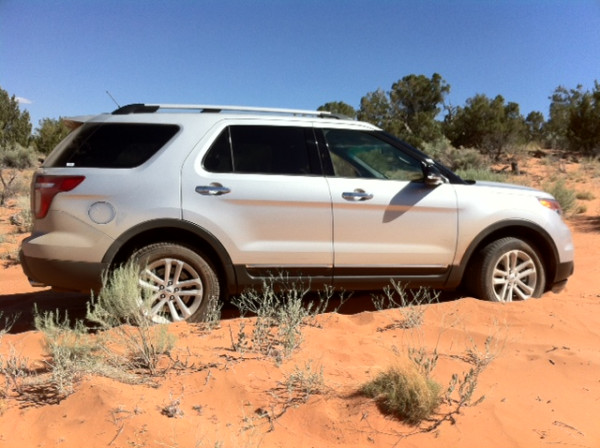 At this point we're hopelessly screwed without the manpower to get the vehicle out.

So God says, "This is ridiculous, if I don't intervene they'll be here all night!"

I then heard music and an engine off in the distance and who pops up over the ridge but a white windowless and topless jeep with a group of 3 fairly attractive jocks from BYU and 2 of their girlfriends wearing flip flops, t-shirts, and gym shorts. Except for the driver who was a daisy duke wearing, barefoot pedaling, shift and clutch maneuvering, sand dune kick-ass chick with a very pleasant demeanor. (I was thoroughly impressed…I know who's on my team in a zombie apocalypse!)

I digress. So the jocks jump out of the jeep in assistance. I saddle up next to them at the hood of the car and push. I was feeling real butch now! Grandpa Chuck decides its better for him to drive than Gary since he's used to this sorta thing. 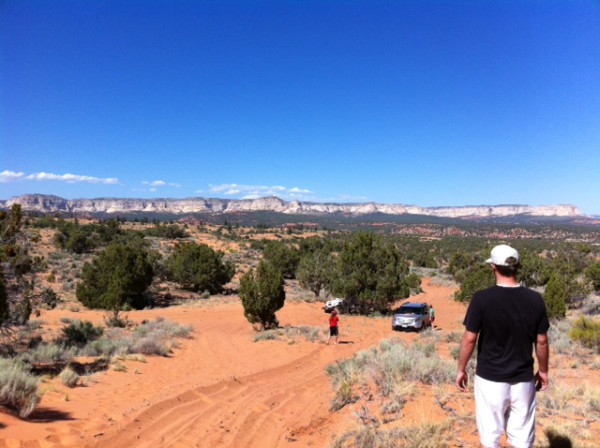 Needless to say, after an hour we got out of the dunes with Grandpa Chuck at the helm and because the windows had inadvertently been rolled down, sand all inside the car.

Probably because of the pity the family felt for us, these urbanized Seattleites who came all this way to see a slot canyon, they decided to drive us to the canyons themselves.

And the rest, as they say, is history!

Indeed he is right.   This lovely family decided that it would be a shame for us to miss the canyon after all that and graciously decided to take us down in the ATVs.   As it turned out it was 4 miles down through all this sand to get to the mouth of the canyon.   The road, assuming you could call it that, was basically tire tracks through sand and we would have never found it without their help.   Gar got to ride on the back of a two-seater ATV while I road with Chuck in a four-seater with a pickup-bed. 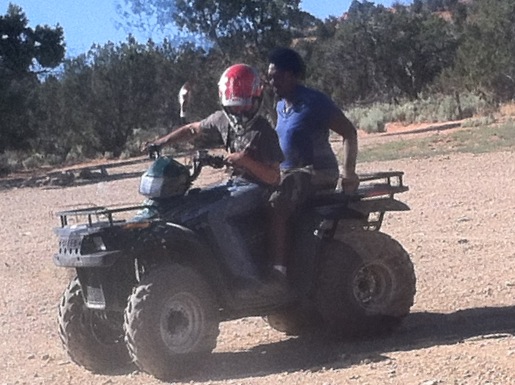 Once we got to the mouth of the slot canyon, Chuck and the family decided to sit with the ATVs while Garland and I explored the canyon.   I can't begin to describe how amazingly cool it was.   Slots start out as a narrow crack in the sandstone and as water rushes in over the years, these narrow canyons form.  The light filtering in is firey red and in the shady areas, almost a deep blue.   They are impossibly narrow, and the air is cool inside.   This one ran for about a mile and we walked the length until it was blocked by a few boulders and we didn't have climbing equipment to get over them. 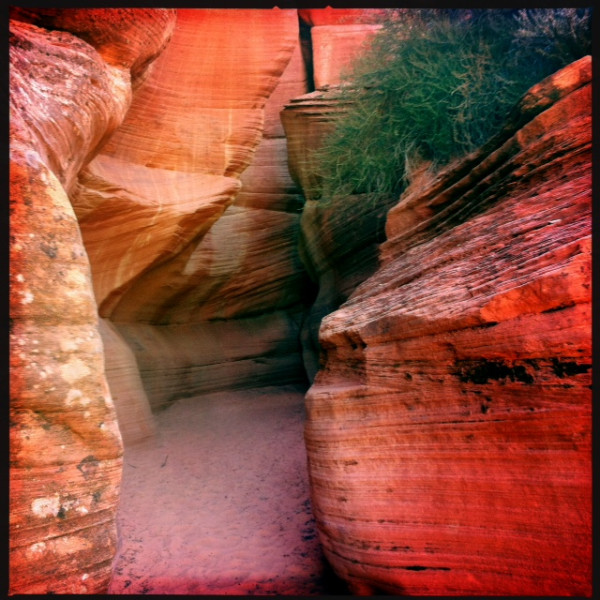 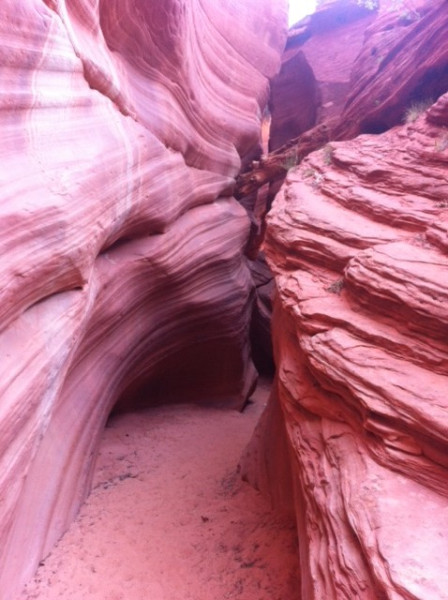 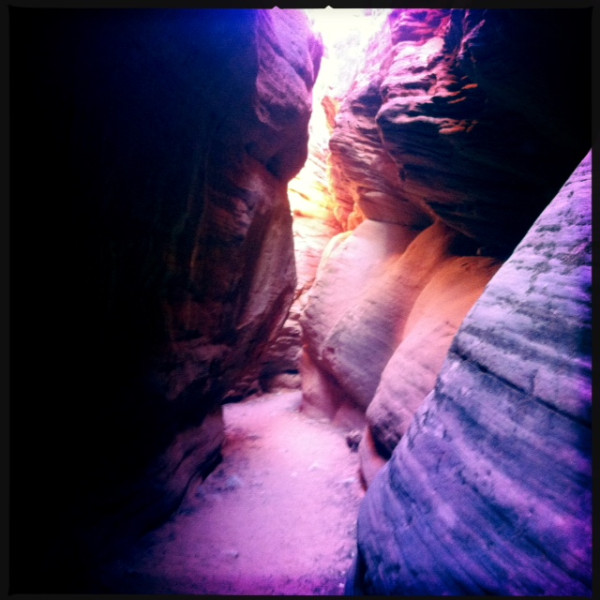 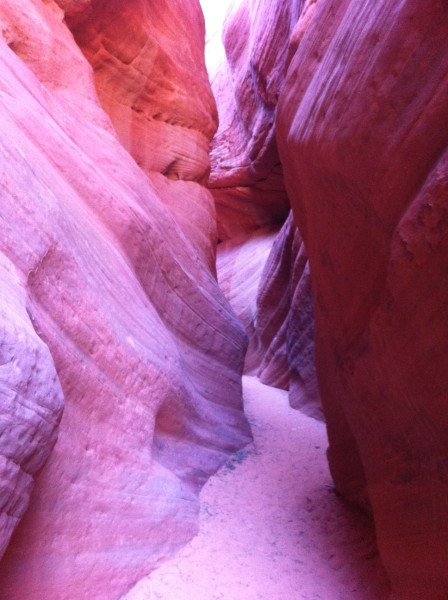 So after we walked back out of the Slot, and profusely thanked our new friends we drove back up to the parking lot.  I was again struck by two things:   First, the absolute lack of information in the web site we used to find the canyon.   Second; the grace and human kindness we found amongst some strangers in Southern Utah who not only helped rescue us, but insured that we got to see what we came all that way to see.   The kindness of strangers is not something one sees much of in this day and age.   I like to think if I were in the same situation I'd behave the same way.  I'm glad to see I'm not alone.    The family refused our offer to pay for gas for their machines, and wished us well as we headed back to Las Vegas.  They used a line I always like to use.  "Just return the favor if you are ever in a similar situation".   Sometimes it's called "paying it forward" or "karma".  Often its more rare than common.

Now to write a strongly worded letter to the folks who created that web page...
Subscribe