Seattle Is A Funny Place

I moved to Seattle in 1990, and I have to say I do love it here.  It's one of the prettiest places in the world, although the weather can be a bit maddening at times.  It's tucked away in the NW corner of the US, about as far away from anywhere else as you can get without a passport, and as such it collects its share of odd people too.  And Lord knows the politics here are as wacky left as Texas and Utah and Arizona are to the wacky right.   Its one of the reasons the TV show "Portlandia" is so funny -- it really should be called Seattleland, as the characters are identical.

And just when I think if gotten used to the politically correct nanny-statism that runs rampant up here, and the odd characters that populate these regions, something comes up to top it.  There were two this week.

We voted to legalize pot here in Washington this past fall, so we've not got a booming pot business forming here.  Where folks used to "hide" it and be somewhat discrete, it's now out in the open.  I don't mind, I really don't.  But sometimes it does get me to scratching my head.   Take this flyer I found at a local coffee shop the other day advertising pot. 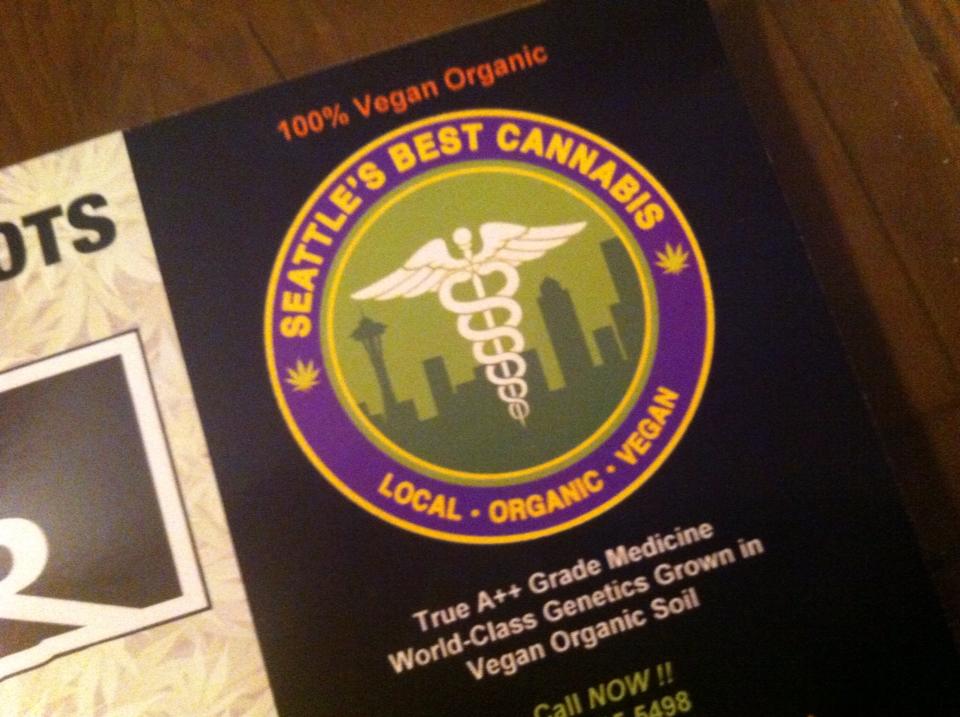 Really?!?!?  Our pot here needs to be both "organic" and "vegan"?   Vegan pot?  Isn't already a plant?   Does it smoke better when it's vegan and organic?  Or do you just feel better smoking it -- well better than you would feel by smoking plain old regular pot?

And then two days ago a rather large dead whale washed up on the shore of Puget Sound a bit south of my home in West Seattle,  It's apparently a "Fin Whale" which is second only in size to a blue whale.   The thing got hung up on the bow of a ship, sliced in half and then rode the bow for some time before falling off and washing ashore.   Now a dead whale isn't something you see every day, so it brought out the crowds -- some of whom reverently placed flowers on it.  And then there was one Ms Ruby Rose (I'm assuming its a "Ms" but in Seattle you can't ever assume anyone's gender or even if they have one).  Ruby Rose said he/she/it was gleaning information from the dead whale.  "I can receive information through my heart and my hands and sometimes my third eye.  Whales are living libraries downloading information to me." I would rather not contemplate exactly what that "third eye" is, maybe it's in the hat I don't know, and I really didn't see any USB ports on the whale or in her/his/its hands, but I hope Ruby Rose managed to download the poor dead whale's Facebook password so he/she/it could announce it's passage to the world so it's friends wouldn't worry.
I probably should send these off to the producers of Portlandia so they can be used in an upcoming episode.  But I suspect they've already written about something similar.
Subscribe