I'm actually writing this standing up.   The old tailbone is feeling the effects of my first long distance highway ride of the year.  Being in Olympia for upwards of a third of the year, especially in long-session years like now, I thought it would be nice to have a bike here to ride on long warm evenings after the day's shenanigans at the Legislature wrap up.   About five years ago on a whim I bought a small used Harley at the Olympia dealer for just that reason.  As it turns out it wasn't all that great a bike, and I soon traded it in on a new 2007 HD 1200N Nightster.  This has become one of my favorite bikes to ride.  It's got a 1200cc engine in the smallest and lightest frame Harley makes.  It's exceedingly powerful, fast, and a lot of fun to ride.  More than any of my other bikes I feel like it's an extension of me when I'm riding it.  I've made some modifications to it -- boosting the power and the handling some, and he's a fast little guy that I've named "Bandit". 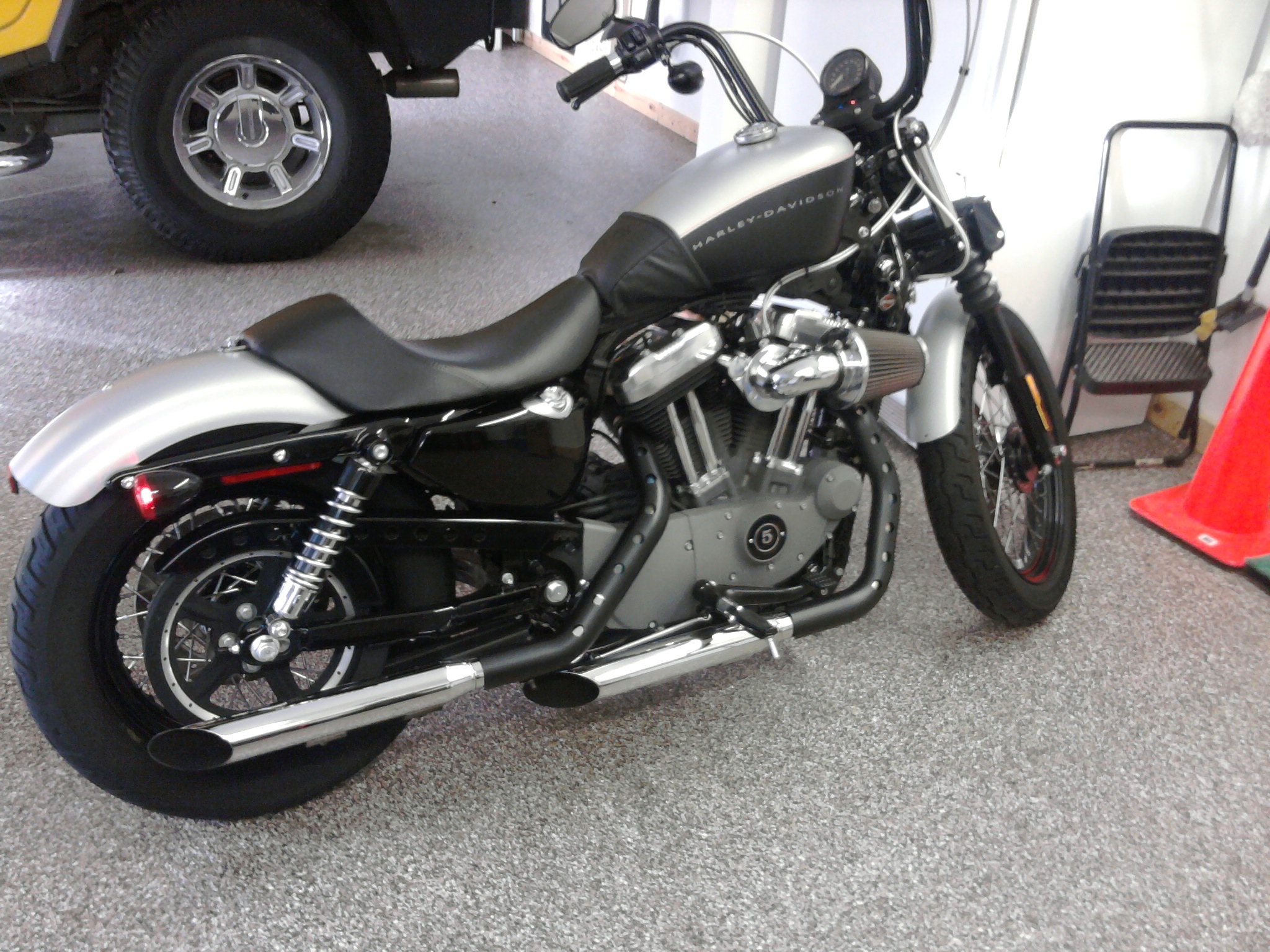 One thing about Bandit though -- he's not set up for a long ride.   At best one can do 100 miles on him given the small gas tank and the seat and riding position.    He's fun for short little putts and cruises around the neighborhood.  Perfect for riding down here in Olympia when I can.   The trick is getting him to Olympia which is 70 miles from my Seattle home.

Well yesterday was a sunny and warm afternoon -- forecast to stay dry and in the mid 60s, which is rare for March.   I had a slow afternoon, and was able to hitch a ride back to Seattle with a colleague so I could ride Bandit back down to Olympia.   He dropped me off about 3pm, and I ran into the house and changed clothes.  It was warm and nice and a perfect afternoon for a nice ride.  I didn't want to face the evening commute along I-5, and so I looked up the schedule online and saw a ferry leaving at 405pm and rode down to the Fauntleroy dock to catch a Westbound boat to be able to ride the quiet back roads along the West Sound down to Olympia. 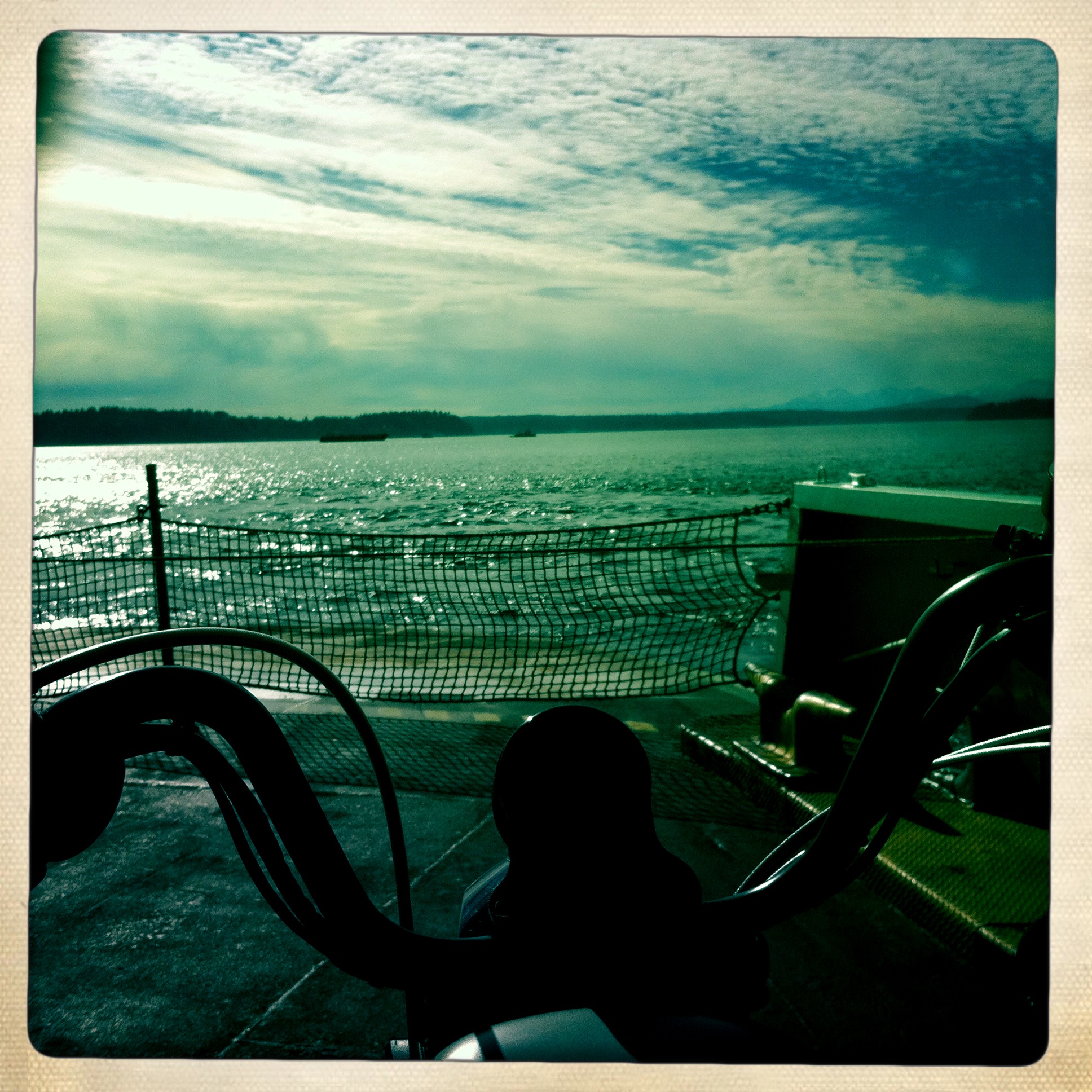 One of the more wonderful aspects of living in Washington is the gorgeous scenery -- which is only enhanced by the state ferry system which is an extension of the highway system.  Spending a half hour gliding across Puget Sound from one side to the other on a sunny and nice day is one of those simple soul satisfying things that we are fortunate to be able to take advantage of here.  So I sat on Bandit, enjoying the ride west across the water -- feeling the sun on my face, watching the far shore get closer and closer, then having the boat dock and riding up the ramp and onto the land again with the freedom to take any road I wanted to and wander anywhere my mind and bike would take me.

The first few miles were along the shoreline, winding and twisting as the shoreline did.  The air was fresh, the road dry, and the sun warm.  My mind was blocking out a lot of the events from a very unpleasant and stressful weekend.  It was my first long-ish rural ride since last fall.   Bandit was responding to my touch, and I was flying along the shoreline like a small bird.  Riding through the small town of Port Orchard I was tempted to stop for some dinner, but decided I'd keep going while the sun was high in the sky.   I turned South on WA-3, down through Belfair, and Alyn and the endless tree-farms -- riding a road that I've ridden countless times before, inhaling the fresh spring air, with hints of cherry blossoms and other flowers.

As I said though, Bandit isn't really a long distance bike.  And while this wasn't a long distance really -- I'd only ridden about 50 miles out of 70 at that point -- about the time I got to the sawmill town of Shelton my backside needed a bit of a rest.   Apparently there are some butt muscles that need to build up some tolerance for a long ride.  My bum was feeling a bit numb -- much like one's thighs feel the first time up skiing after a summer off.  So I pulled up at the little overlook coming into Shelton and looked back North over the small mill town and up the Sound back over where I'd ridden. 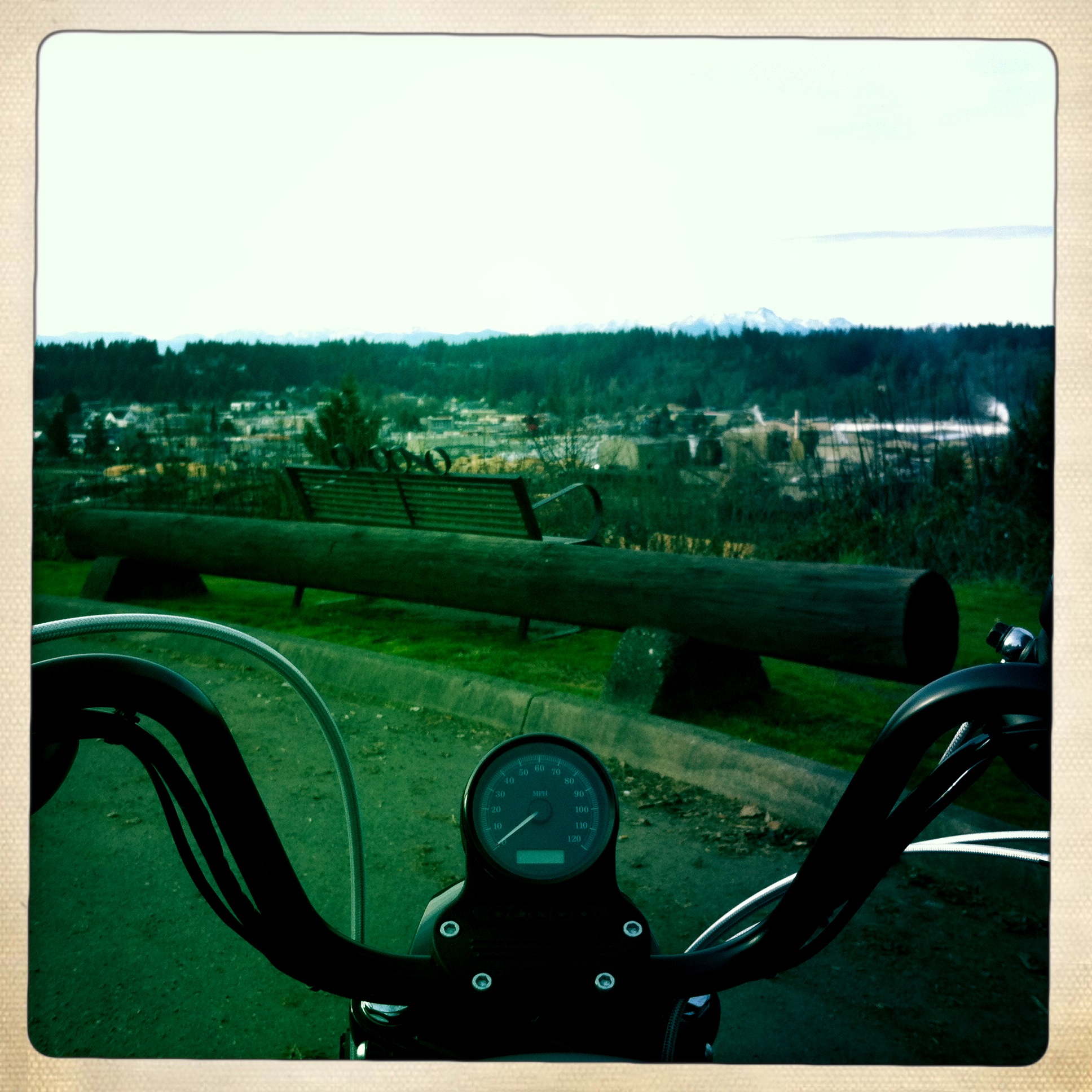 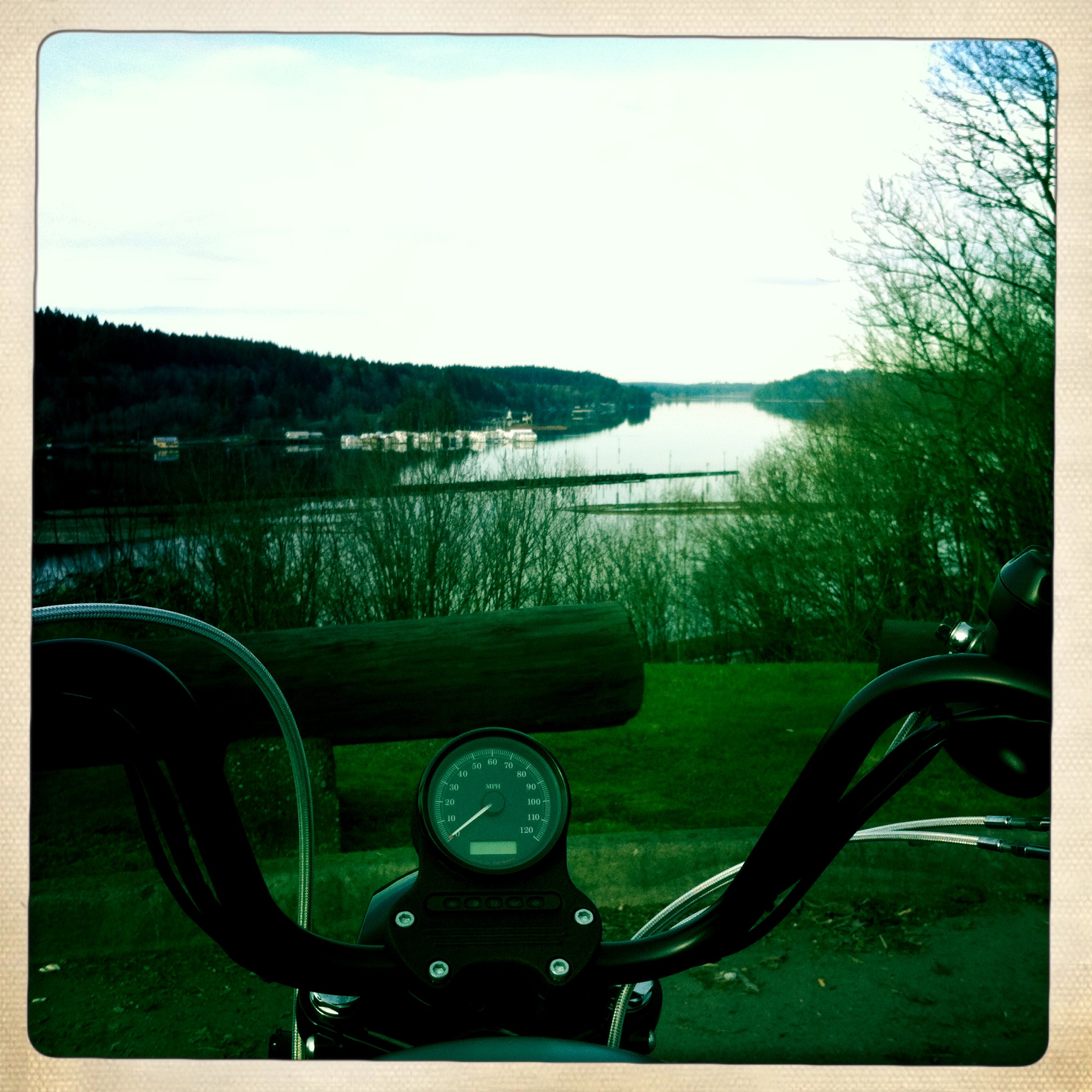 Shelton is a nice little town -- it smells of sawdust from the giant Simpson timber mill, and there's a great little burger joint called "The Ritz" right on the main drag.  I was tempted to eat, but with the sun going down over the Olympics in the distance, and a burned out tail light, I wanted to get back to Olympia before dark.   But I enjoyed a nice 20 minute break at the overlook, watching a little Simpson Timber switch engine putter about and move lumber cars around the mill below me.  After I regained the feeling in my back side I threw a leg over Bandit and fired him back up and headed south out of town.   I passed one of the places I'd photographed for my "Ghosts of the Road" book -- the site of the old "Millcreek Motel", along Highway 3 on the South end of town.   There is something sad about abandoned small motels along backroads that just draws me to them. 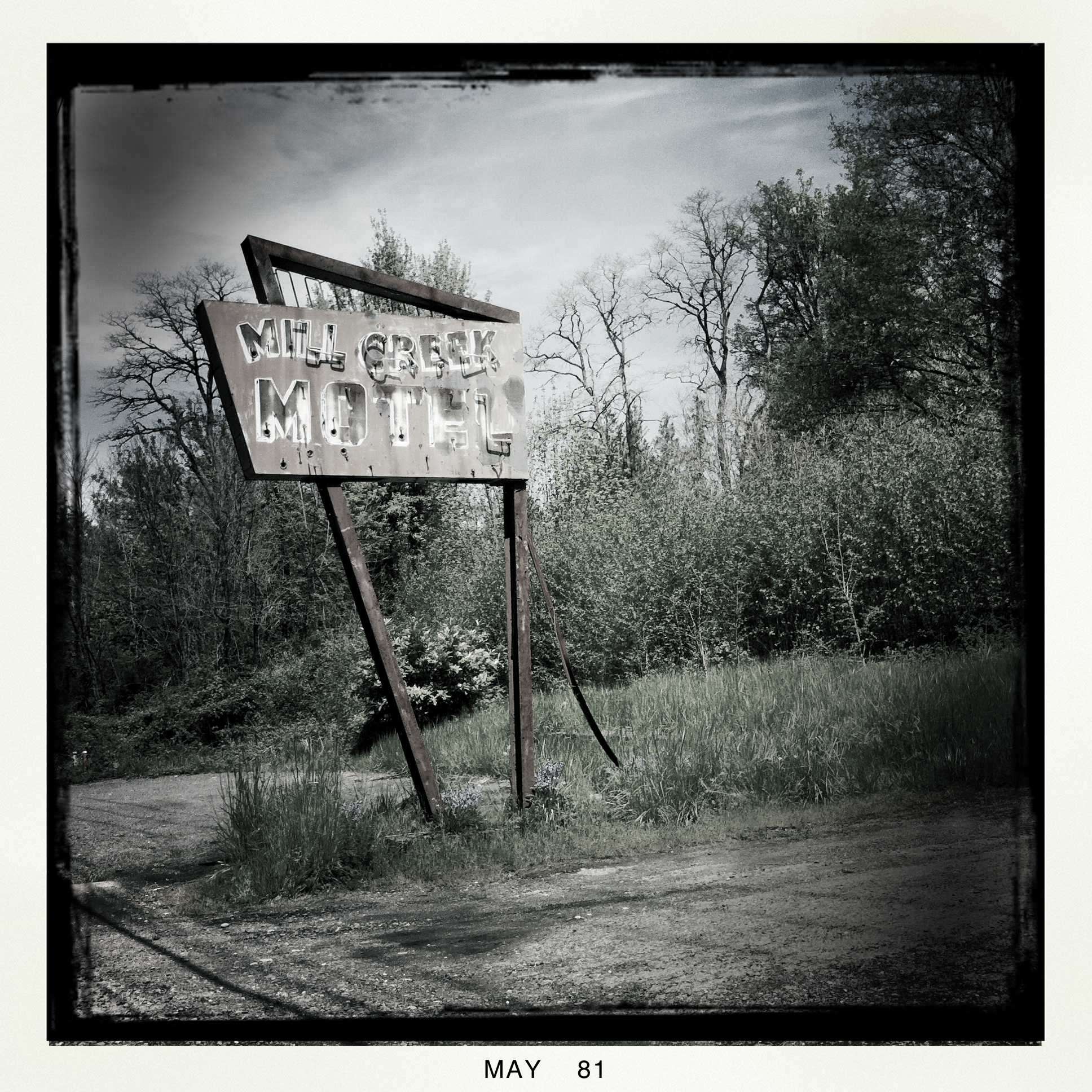 Just South of Shelton, WA-3 becomes a divided four lane, and then quickly merges with US-101 just outside of Olympia.   Although it's built to freeway standards, it's still a very nice and scenic road winding along the sound and through the trees.  The sun was at my back, setting over the Olympic mountains, and it started to get a little chilly.   But it was only a short 20 miles to my condo in Olympia, and soon I was rumbling into the underground garage and shutting Bandit off.

So today the backside is still a little numb -- but the sun is out again and if the afternoon gets slow, I'll hop back on Bandit and run up to the Harley dealer for a taillight bulb.  I gotta build up the backside muscles again as it's getting to be riding season again, and the open road is calling.
Subscribe