In Simon and Garfunkel's hit song "The Boxer", there is one verse that they added years later with a line that says "Now the years go rolling by me, they are rocking easily, and I am older than I once was, but younger than I'll be, that's not unusual.  No it isn't strange, and after changes upon changes we are more or less the same."

I started lobbying in Washington in 1990 when I moved to Seattle from Phoenix to start a job as the Vice President of Public Affairs for the Washington Credit Union League.  That was 23 sessions ago.   I lasted with the Credit Union League for only a few years before I hung out my own shingle and went into private practice.  For a few years I didn't have an office in Olympia -- commuting down every day from Seattle.   But in 1999 I started renting a small space -- first a desk, then a cubicle, and then a full blown office in a building not more than two blocks from the Capitol.  Back then it was the "Washington Financial League" building -- named for the owner, a trade association of Savings and Loans.  The WSL was run by a good friend and mentor of mine, and the office was graciously furnished by my biggest client at the time BECU.  I had that office for 11 years -- until December of this last year.  It was a fantastic office -- a two minute walk from the capitol, and a great parking space.  This is me back in 2002 -- when I had hair (well some hair) and glasses, and had been in this office for two years. 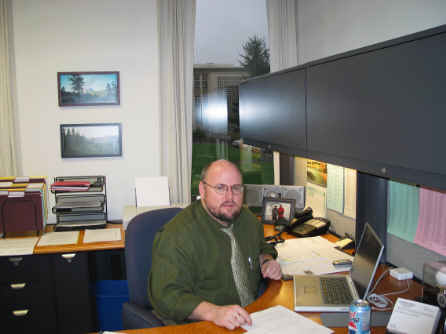 In December last year the Washington Financial League (the old Savings League) who I was renting the office from, closed its doors and because my office was part of their larger suite, the landlord rented out the entire space to another entity and I had to find someplace else.  It wasn't easy to do upon short notice, and with the 2013 Session starting up in a few weeks it was imperative, but I manged.  A colleague of mine purchased an old mansion in the South Capitol neighborhood -- it was built in the 1930s, and has a slate roof and a turret and most folks call it the "castle" since it somewhat resembles one. He had recently added a small room with an outside entrance on the back side of the house -- and offered it to me for a reasonable sum -- split with another colleague of mine, and with a short lease for just the legislative session.  Its small, kinda drafty, but it has a great view, but no parking.  It's close -- closer than my old office was to the Capitol, which is nice.  It's not easy sharing a small office with another person -- but my office mate is a friend and we get along well.  If we have to have extended phone conversations we generally step outside.  It's not ideal like my old place was -- but it will do for now. 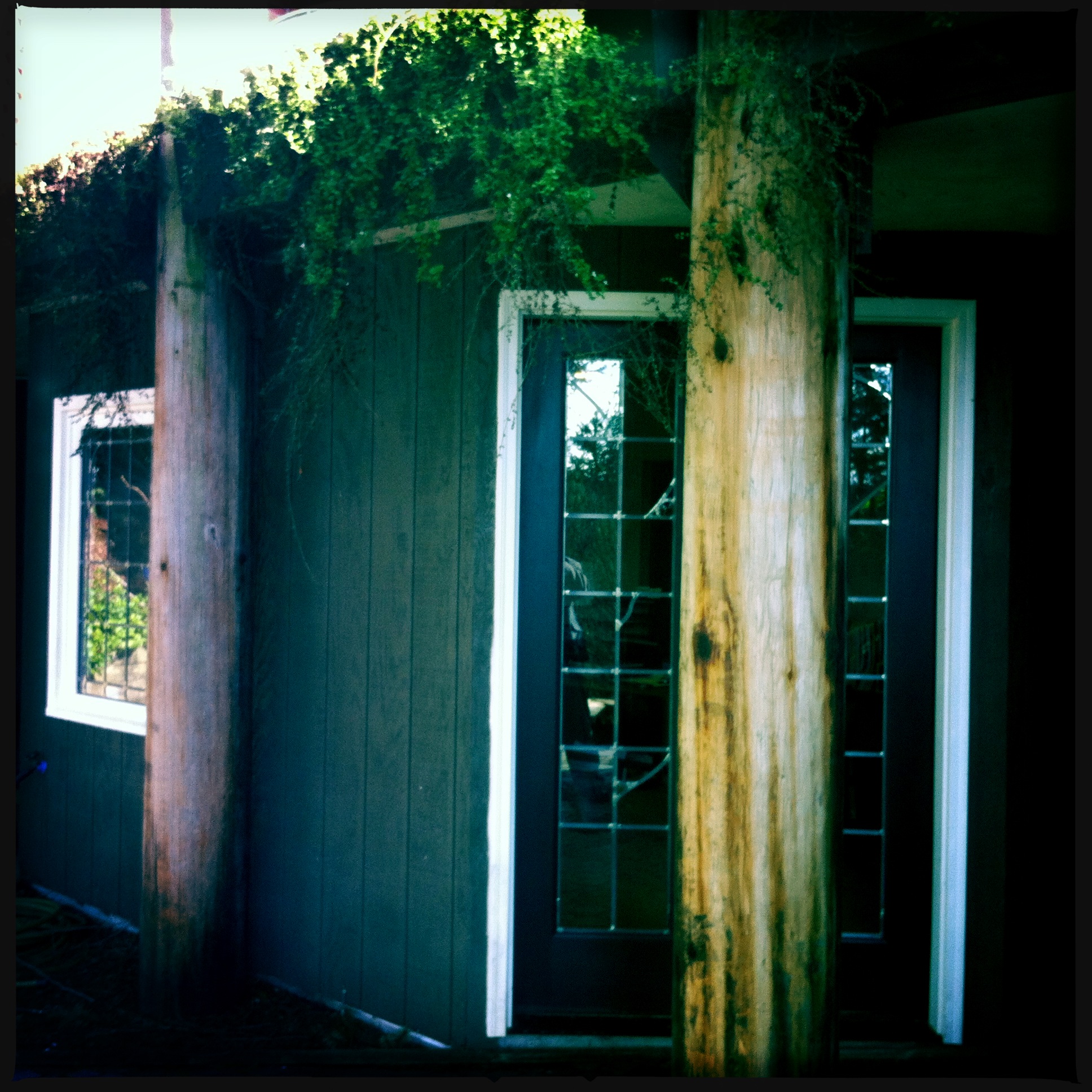 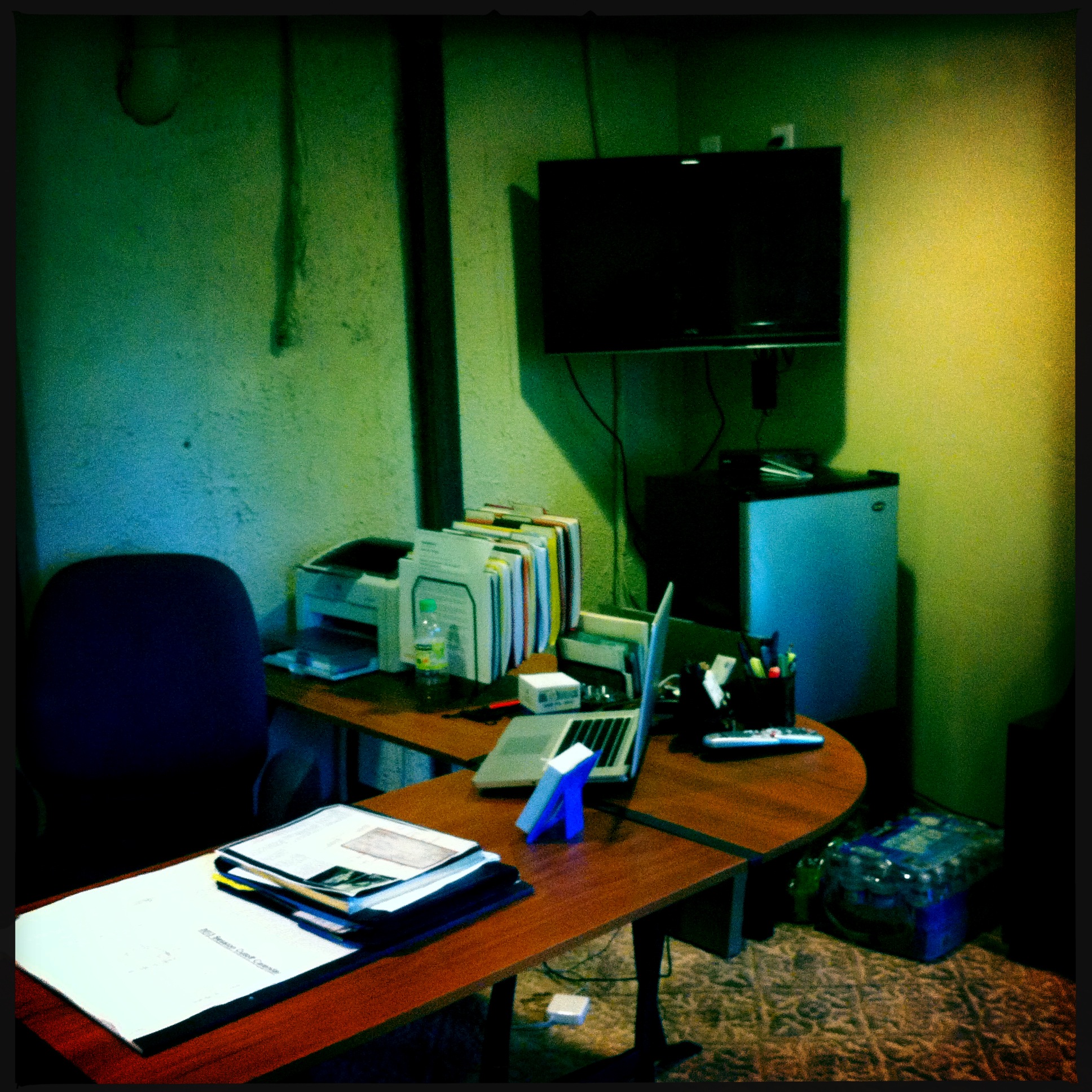 But I can't complain about the view.  The old house sits on the bluff overlooking Capitol Lake, and I look out over the trees down to the lake -- I can even hear an occasional train when the Tacoma Rail local goes across a viaduct over Capitol Lake once or twice a week with a short little local freight train.  When we get into March and April it will be nice to open the door and maybe even sit out here in the sunshine if it comes out. 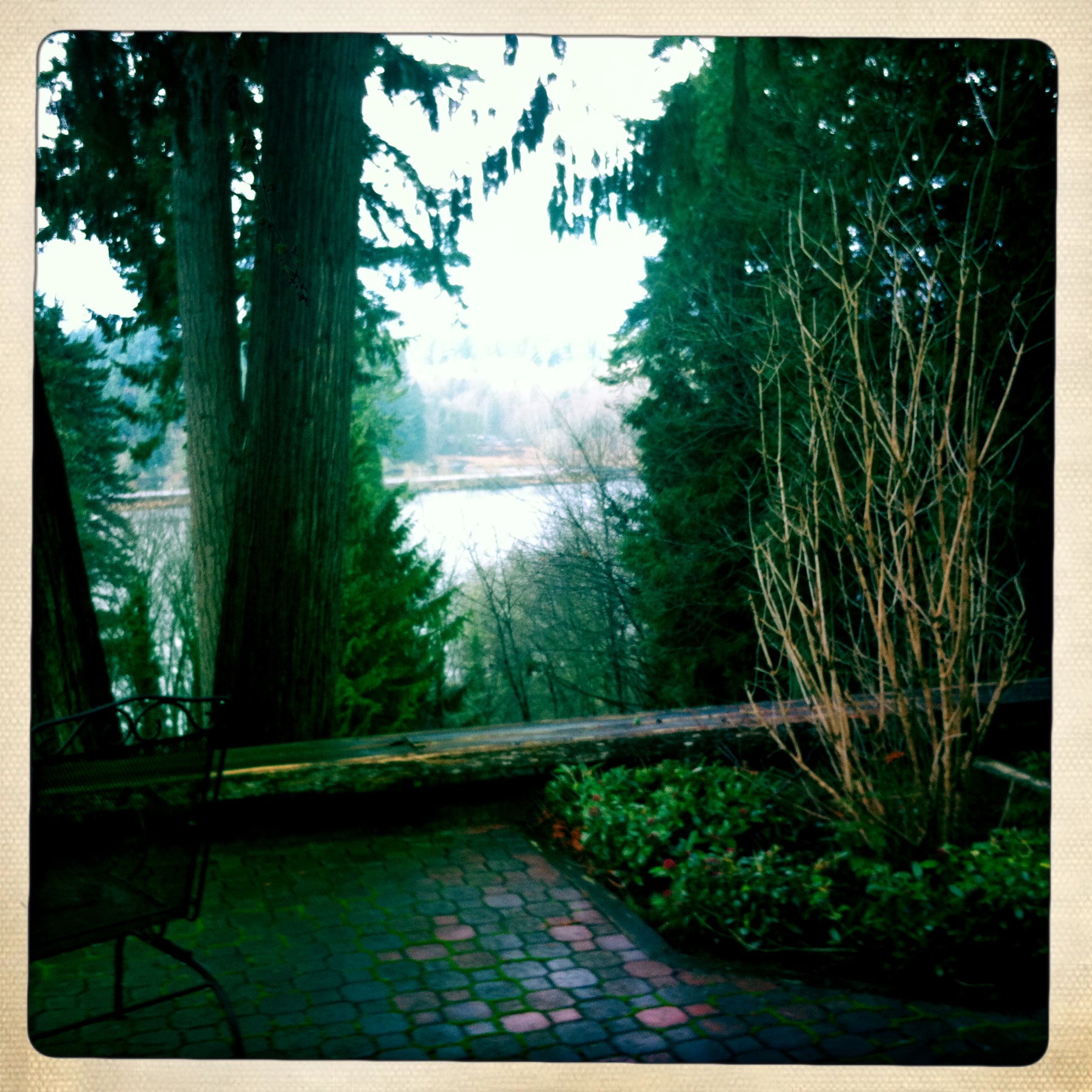 I have to rent a parking spot in the large underground state garage about 6 blocks away.   And every day I go down into the garage, park the truck and walk up to the plaza and over the sky bridge across Capitol Way and then onto the Capitol grounds and walk a few blocks over to the castle.   And every day I see my old office from the sky bridge, it's now the Ports Association building.  I can see my old parking space on the corner behind the bulding -- minus my yellow Hummer.  I can see the windows of what for 11 years was my office.  I see the door I went in and out of dozens of times each day on my walks to and from the legislative buildings.   It's very strange to not go into that building like I've done every day of a legislative session for 11 years. 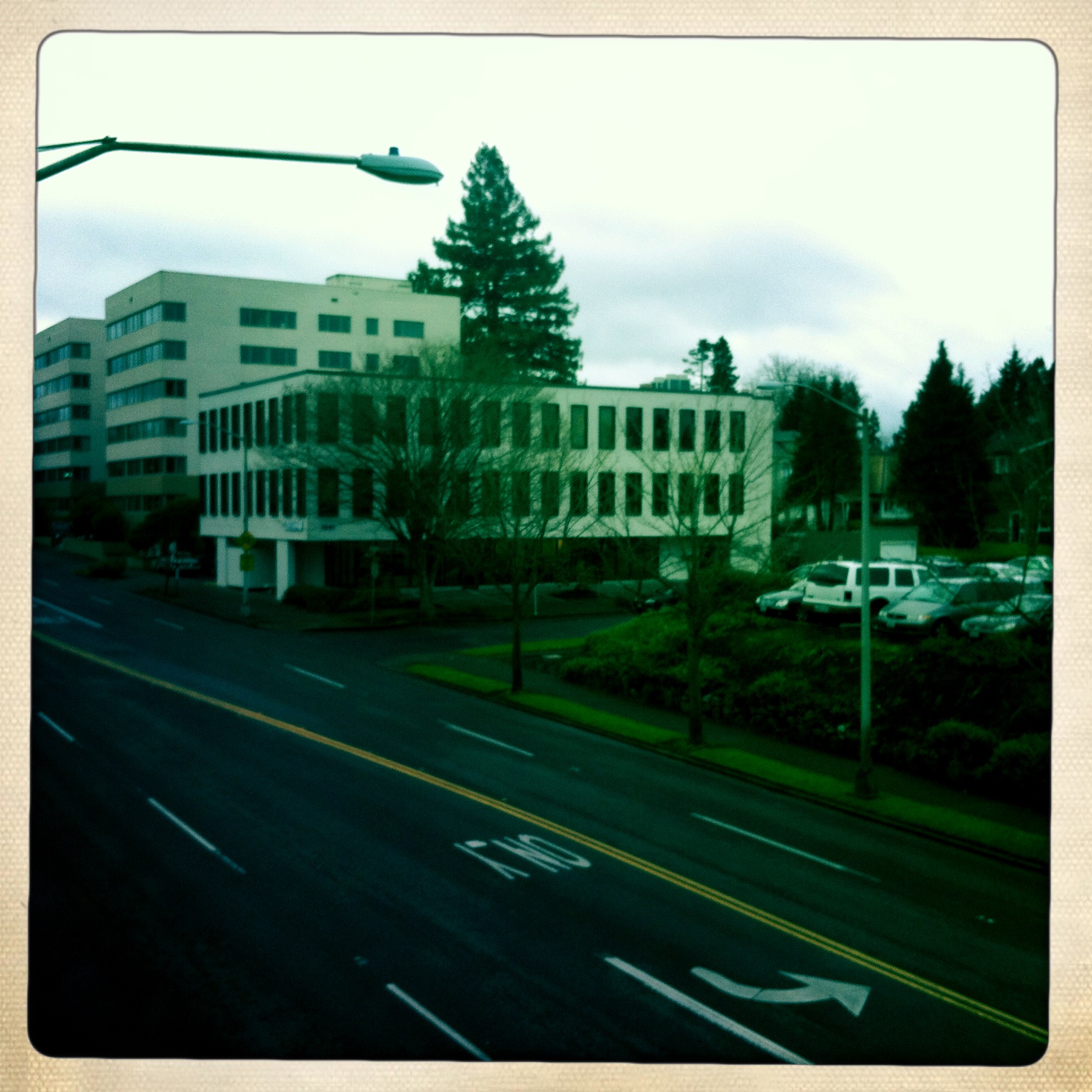 And I miss my friends in the building -- people I shared offices with on the second floor for years.   Two or three are still there, but all of us who were in the Financial League's office are gone.  I miss the "count down" clock -- the digital display someone rescued from a bar where it once counted down the days to St. Patrick's day and changed it to count down the seconds of the Legislative session.  (Time does seem to be passing by quicker though without the constant reminder of the clock in my face -- we are already at day 26 of 105).  I miss being able to chit chat and gossip with my colleagues, share birthdays and special occasions, and share in boxes of donuts and treats.  I miss my big office space, with the couch to lie down on when I had a headache and was stressed.

But life marches on, and things change.  The Legislature has changed a lot this session.  Many of the folks I "grew up" with -- people that were elected when I first started, have retired and moved on.  The legislative leadership structure has changed, and there's a whole lot of new faces in town.   My client portfolio has changed and shrunk, but I'm still very busy.  The procedures and mechanics of the process haven't changed, but the faces and the location have, and while I've not put in  anywhere close to the number of years around here as some of my colleagues, I am feeling like one of the "old timers".  But as the song says, "after changes up on changes I am more or less the same"....

I had a meeting with my colleagues in the conference room of my old office the other day.  I walked in the familiar front door and headed up the stairs.  I glanced at the building directory as I walked across the lobby and saw that my name was still listed.  Maybe the building misses me too. 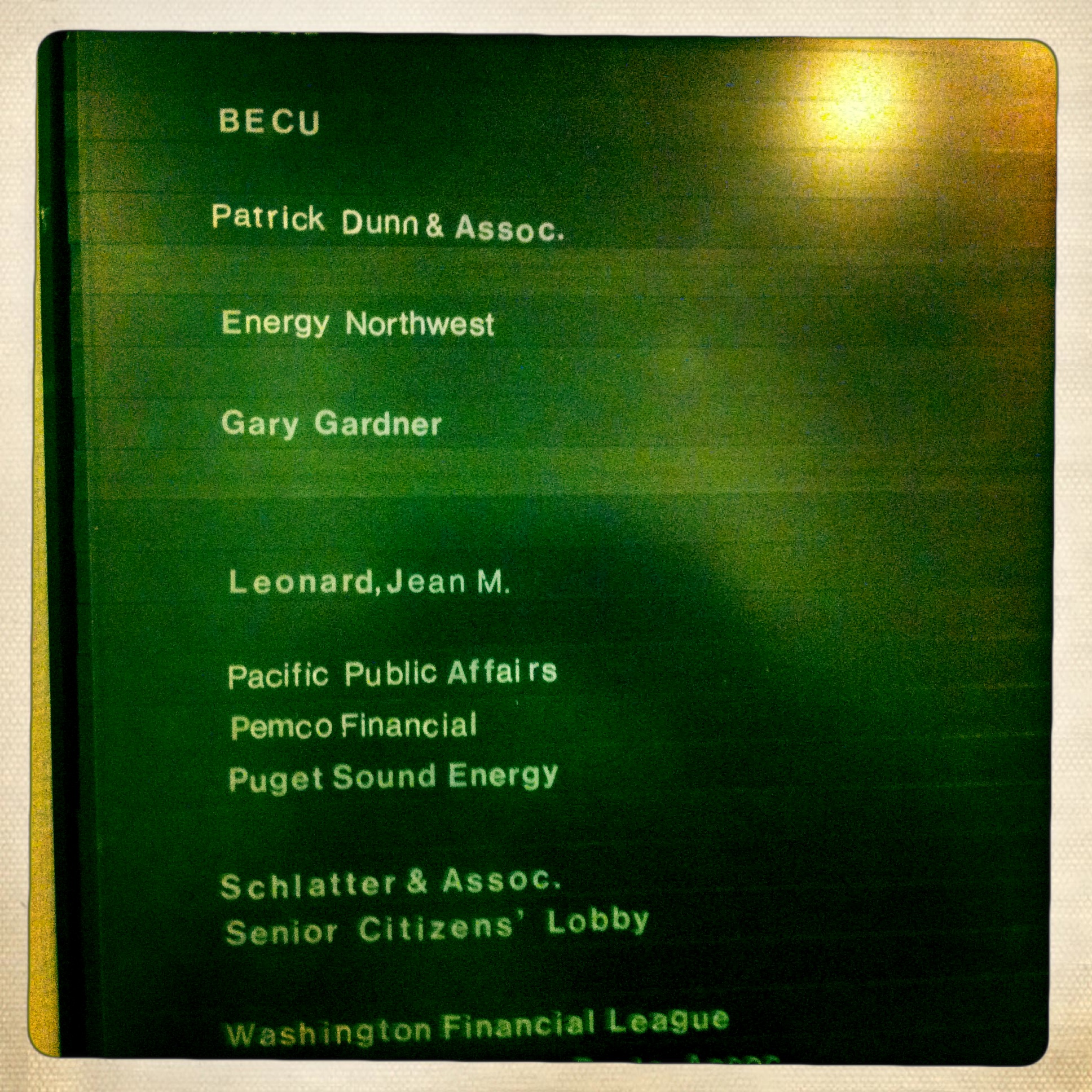