Wow, already 2013, and as I write my February column in advance of heading off to Olympia for the 2013 Legislative session that starts on Monday, I thought I'd post my January column here.

We all make resolutions in the New Year – things we want to change about our lives and to improve on or stop doing.  In most cases we all break them or give up on them shortly after the year starts.  It’s why gym memberships spike in January and you can’t get into a gym because of all the people working out, and by February it’s back to normal and quiet.

I was thinking about what sort of riding New Years resolutions I could make this year – something I could actually keep.   I could resolve to ride more miles, or perhaps down some roads I’ve not ridden on, but hey I’d do that anyway so that isn’t a real resolution.  There’s no challenge there for me.

I could resolve to stop pissing off some of the political and riding groups with my opinions on what things should be a realistic legislative priority in Olympia, but that’s no fun and I wouldn’t make it past January 2nd with that one.

Then I ran across a picture of my late Father taken in the late 1940s.   It’s him and his Dad, standing in front of a Conoco Oil station Grandpa owned on old US-91 in the town of Nephi, Utah, where my Dad grew up.  It’s one of my favorite pictures of my Dad – standing proudly at the pumps with the sign “E.O. “Buzz” Gardner – Proprietor” proudly stenciled on the gleaming white building.  What’s telling about the photo is Dad’s covered in grease.  You see Dad was grease monkey – a wrencher if you will.  Dad worked on everything back in the day, and was a mechanic in the Army during the Korean War.   That inspired me, so I resolved to learn how to wrench my own bikes – or at least do some of it.

The Yamaha had a small 60cc two-cylinder engine with a petcock fuel valve and a carburetor.   I’ve seen lawnmowers with more complicated engines.   Dad and I could fix those with relative ease. You opened the hood and there was a very simple, very basic engine, and you could get to everything either standing on the bumper or sliding underneath on a roller.

Now days when I crack the hood on my Hummer, I can’t even figure out the engine, let alone locate anything on it.  I know there’s an engine in there somewhere underneath all that -- after all when I put the key in the ignition and turn it a motor comes to life and I can drive it.

The bikes?  Well they have a standard HD V-twin motor.  I can “see” the components for the most part, but it too is a bit too complicated for my high-school age, pre EPA, rudimentary mechanical knowledge and skill.   It’s all a little daunting.   Heck, one of my good riding buddies had a major complication with his Geezer Glide a while back when he mistakenly put type 4 rather than type 5 brake fluid in and all his gaskets and seals dissolved and he had no brakes.   And this guy knows better!  He just grabbed the wrong bottle at the dealer.

See this is why I’m scared to wrench on my own bikes!   It’s just easier to take it to the dealer for all my service work.  But money’s a little tight, and I figure that learning to wrench some on my bikes might save me a few bucks.   I mean I can do some basic stuff – like change the oil and light bulbs.  I was very proud of myself this summer when a buddy of mine had an issue up on Snoqualmie Pass and I was able to fix it.  His shifter linkage disconnected from his shifter when the screw vibrated out at 70mph going up over the pass.  I was able to jury-rig it back together using a zip tie, until we were able to ride up the road to a gas station and get a bolt and nut that would work.

But a tune-up?   Tighten the primary drive?   Replace gasket or fix lifters rattling?  All way above my comfort zone.   So I’ve found a few basic mechanic books that I put on my Amazon wish list that I got for Christmas, and I think I’ll spend my winter weekends reading and perhaps being brave enough to attempt some basic garage skills.   I’ll be honest, I’m nervous.  I may end up spending more than it cost me to go to the dealer to have something done, since I very well could screw it up and have to have even more work done by a qualified mechanic who can fix my mess.   I don’t know, but I’m gonna give it a shot. 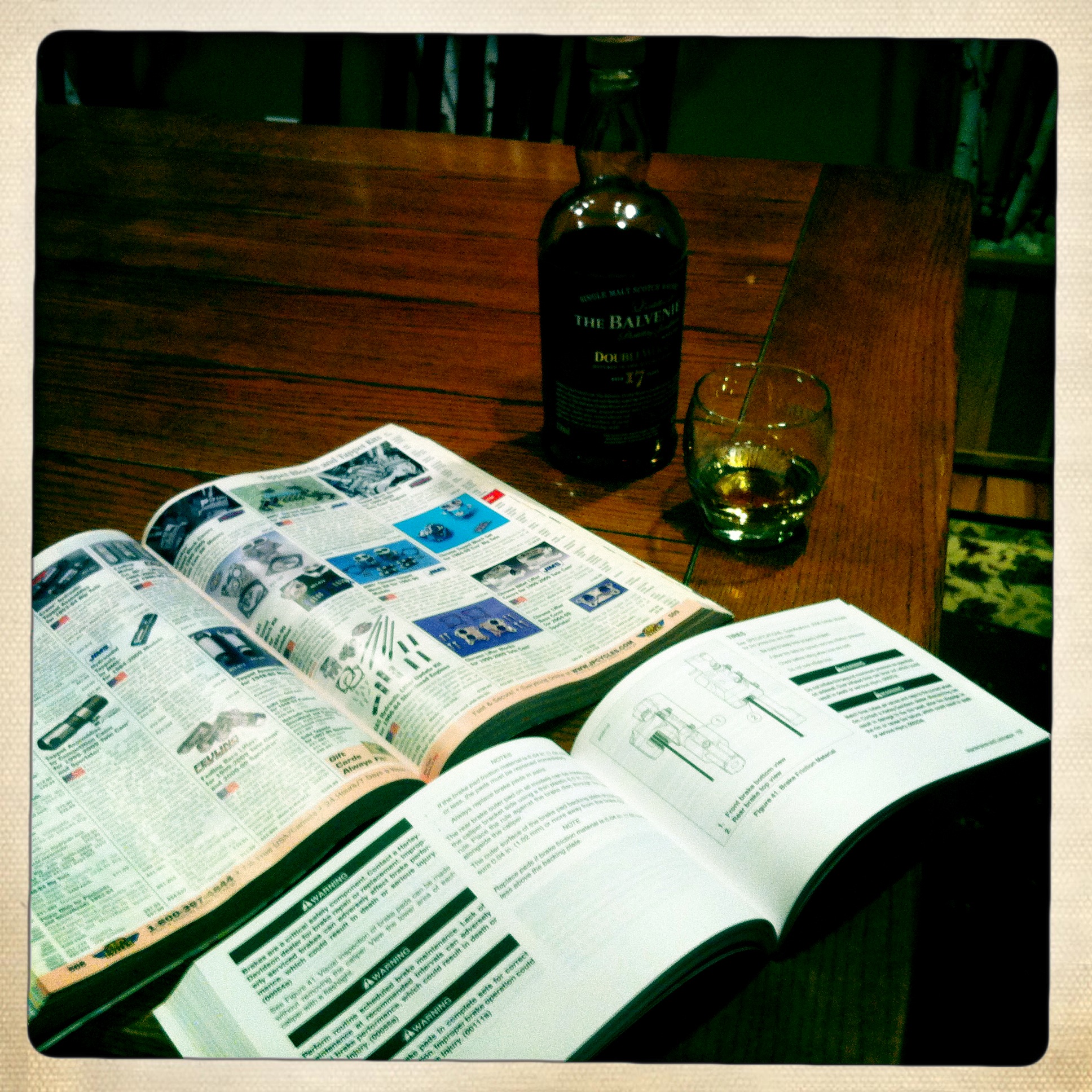 But then again, maybe a more realistic New Years Resolution would be to try out several different new single-malt Scotches that I’ve not tried yet.   That’s one I know I can keep.